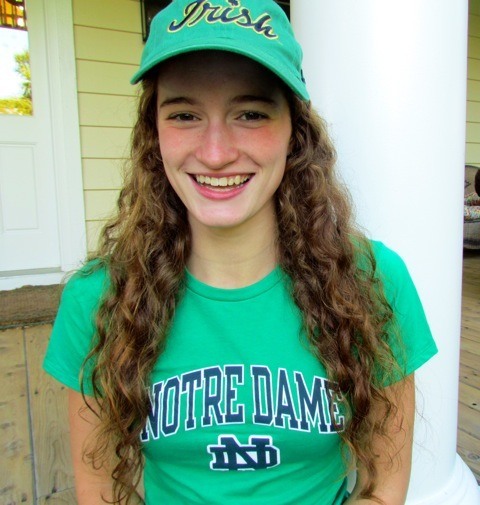 Abbie Dolan was a key player in the win, bringing home 3 individual victories. In the 200 free, Dolan and Louisville's NCAA champ Mallory Comerford were separated by just a hundredth. Archive photo via Abbie Dolan

Louisville freshman Tatiana Salcutan threw down a personal best of 1:53.98 in the 200 backstroke to solidify her spot at the NCAA Championships.

#19 Isabella Abrajan of MVN Verbally Commits to Duke for 2022

The Notre Dame men and women hosted ACC rival Louisville in dual meet action on Saturday. The Fighting Irish came away with a 153.5-146.5 victory on the men’s side. On the women’s side, Notre Dame defeated Louisville 181.5-118.5.

Abbie Dolan was a key player in the win, bringing home 3 individual victories. In the 200 free, Dolan and Louisville’s NCAA champ Mallory Comerford were separated by just a hundredth. Comerford came home hard with a 26.59 final split to try and run Dolan down, but she came up just short, with Dolan touching in 1:46.12 to Comerford’s 1:46.13. They went head-to-head again with another close finish in the 100 free, but Dolan was once again able to hold on in the end. She took it out in a quick 23.68 to give herself the lead, winning in 48.94 to Comerford’s 48.99.

Grace Oglesby and Rachael Bradford-Feldman were the highlight performers for the Louisville women. Oglesby was the only woman to break 2:00 in the 200 fly, putting up a 1:58.64 to outpace Notre Dame’s Nikki Smith (2:00.50). Bradford-Feldman gave the Cardinals a victory in the final individual event of the day. She led the 200 IM from start to finish, touching in 2:03.45 to lead a 1-2-3 finish with teammates Mariia Astashkina (2:04.30) and Alina Kendzior (2:04.93).

On the men’s side, Notre Dame freshman Zach Yeadon made a statement in his first collegiate dual meet. In the 1000 free, Yeadon took down Louisville All-American Marcelo Acosta (9:05.37), coming within tenths of his best time with a winning time of 9:02.47. He went head-to-head with Acosta again in the 500 free, completing the distance sweep with a 4:21.66. Acosta would have wound up 2nd, but was ultimately disqualified.

After the narrow 50 free loss, Barna came back to win the 100 free for Louisville. He was neck-and-neck with Notre Dame’s Tabahn Afrik, but was able to get his hand to the wall first with a 44.30 to Afrik’s 44.49. Teammate Carlos Claverie also picked up wins for the Cardinals, sweeping the breaststrokes with a 55.47 in the 100 breast and a 2:01.12 in the 200 breast.

“It was a good early season assessment for our program,” said UofL head coach Arthur Albiero. “We are excited to get back to training and working towards our lofty team goals. We fell short on final scores but I am proud of the team resolve. Special recognition to our divers who won three of the four diving events today. This group continues to make good progress.”

In the first event of the day, the Lady Cards 200 medley ‘B’ relay of Ashlyn Schoof, Avery Braunecker, Nastja Govejsek, and Casey Fanz took second with a time of 1:41.92, while the ‘A’ team of Alina Kendzior, Maria Astashkina, Grace Oglesby, and Lainey Visscher posted a time of 1:42.01 to take third. The men’s ‘A’ team of Nikolaos Sofianidis, Carlos Claverie, Nicolas Albiero, and Andrej Barna swam to a first place finish in a time of 1:29.02.

Astashkina recorded her first individual victory as a Cardinal, finishing nearly three seconds ahead of her closest competitor with a 2:13.99 in the 200 breaststroke. Fellow freshman Friesen placed third (2:17.70), while Rachael Bradford-Feldman was fourth (2:18.03). The Cardinals swept the 200 breaststroke as Claverie touched first with a 2:01.12. Todd Owen was third in a time of 2:05.25.

In the 100 fly, Oglesby continued her solid performance with a third place finish (54.38). Govejsek followed just behind in fourth with a time of 55.34. Harting took second, stopping the clock in a time of 48.04.

Up next, the Lady Cards will head to Dallas, Texas on Oct. 13-14 for the SMU Classic. The team will then reconvene at the Ralph Wright Natatorium on Oct. 20-21 for a two-day dual against Michigan.

Sophomore Abbie Dolan won the 50, 100 and 200 freestyle events, while also adding a leg to the champion 400 freestyle relay team, to help guide the Notre Dame women to victory. Dolan’s wins in the 100 and 200 freestyle came impressive over tight competition from Louisville’s Mallory Comerford, a gold medalist at the 2017 FINA World Championships.

Freshman Zachary Yeadon broke a pair of Rolfs Aquatic Center records in his collegiate dual meet debut, winning the 500 and 1000 freestyle in the process.

Other Irish individual double-event winners against the Cardinals were Justin Plaschka (50 freestyle and 100 butterfly), Lindsay Stone (500 and 1000 freestyle) and Rob Whitacre (100 and 200 backstroke). “Obviously this is a great win for both of our programs,” Irish head coach Mike Litzinger said. “I’m truly happy with the total team effort that both groups put in. While there were some shining individual moments, the reality of it is our group works very hard. They rely on each other. Today was a perfect example of true team swimming.”

Making the freshman’s feats all the more noteworthy, Zachary Yeadon’s pair of Rolfs records were hardly established at the expense of run-of-the-mill swimmers of yesteryear.

On the freshman class that accounted for six individual event wins on Saturday:

“Our team has some really good experience at the top end, but we are recruiting very well and that showed by the freshman performances. I think our future is very strong. To swim against teams like Louisville and, next week, Texas A&M and Michigan State, then down the road Indiana and others, I think we’re going to continue to be tested. This is just one meet. Now we need to run through the rest of the year with the priorities being NCAAs and ACCs.”

A five-meet homestand to open the 2017-18 season will continue on Friday for the Irish as Notre Dame plays host to Michigan State and No. 15/5 Texas A&M at 5 p.m. in the Rolfs Aquatic Center. The Aggies will stick around for a dual-meet against the Irish at 11 a.m. on Saturday.

Dang!! Not too shabby beating comerford!

My sister is a redheaded swimmer with curly hair named Abby Dolan. This is a freaky coincidence.