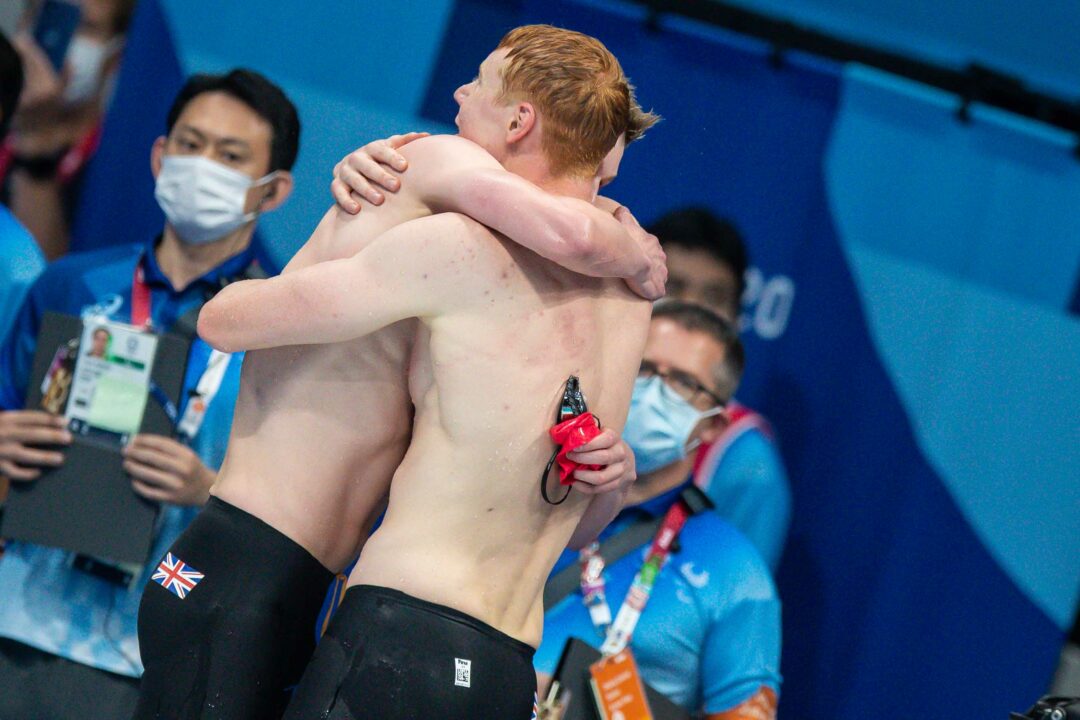 For the first time since the 1908 Olympic Games in London, the nation of Great Britain landed upon the top two tiers of an Olympic swimming event.

Dean produced a stellar outing of 1:44.22 while Scott registered a new personal best just .04 behind in 1:44.26. Bronze went to Brazil’s Fernando Scheffer in 1:44.66 while 16-year-old David Popovici of Romania nearly medaled with a European Junior Record of 1:44.48.

On his Olympic victory, the Dave McNulty-trained Dean said, “It’s amazing. I said it before, to have two Brits on the podium and coming one and two shows dominance in this event and how far British Swimming and Team GB have come, I couldn’t have asked for any more, it’s amazing.

“I can’t thank my coach David McNulty enough for what he’s done. He said, ‘we’re writing an amazing story’, with the COVID situation, I had six or seven weeks out of the pool during an Olympic year. He brought me through it and here we are, and I can’t thank him enough for it – we couldn’t have had a better ending to the story.

You can read more about Dean’s double bout with COVID-19 here.

The 21-year-old Bath swimmer continued, “I knew it was going to be a dogfight, I didn’t know how people would swim it. I just want to say thank you so much to everyone back home, my mum, my family, my girlfriend, all the boys back at Maidenhead, thanks for staying up – I can’t say thank you enough.”

Scott first praised his countryman before commenting on his own silver medal result. “Massive credit to Tom Dean, that was unbelievable. Olympic champion, to come along so far in the last 18 months, it’s a pleasure to watch. It’s great to be able to say he’s a good mate out of the pool as well.

“I’m delighted with that, for me, I’ve got to give massive credit to my coach Steve Tigg, I wouldn’t be standing here without him. The journey I’ve been with him since I was eight has been phenomenal. I’m just buzzing for Deano, to be honest.

“To come first and second now shows we’ve got great depth in the 4x200m Freestyle Relay too, our 200m Free final at trials was really stacked as well. It’s a bit of a weird one, with finals in the morning, the 4x200m is actually this afternoon. It’ll be interesting to see what we do. We’ve got a great opportunity in that, but you can’t write off some really competitive nations, it’s going to be really difficult so we can’t get complacent. We’re looking forward to it, for sure.”

The men’s 4x200m free relay is coming up this morning where these two men’s performances, paired with a dominant relay prelim performance, have fueled talks of a potential World Record-setting performance.

Something about this relay feels reminiscent of the 4 x 100 in Beijing. It seems like there is a clear favorite, but I just have this feeling something magical could happen. That’s all I’m going to say.

Ok but let’s come back and talk about it if it doesn’t.

The only way I could see it happening is with a Smith PB on the leadoff for open water, 2 solid 1:45low/1:44 high legs, a monster Townley anchor, and a Great Britain choke (i.e. Dean repeats his 1:46 prelims leg). It could happen, a lot of things just have to fall into place.

that was not a choke. there was no need to swim all out to qualify

Regardless or not even though they weren’t clear favourites the Americans qualified first from the heats in Bejing, the race was special but not a complete shock….maybe a better comparison is the London 2012 4x 100 with the Aussies choking and France qualifying 4th and winning Gold. However, the 4×200 relay over the last 21 years has had many upsets

France weren’t really favorites going into the Olympics and only slight favorites coming out of prelims. This would be a far bigger deal assuming the British swim anywhere near what they’re capable of.

side note: I’m an American who loves that race. But we were only conclusively the big underdogs after the 3rd leg.

McNulty has produced Olympics medalists in the last 3 three Olympics absolutely brilliant coach congratulations !!!!
All 4 of the boys who swam in the 4x 200m heats all train together with him in Bath and although Scott will come in for the final, McNulty will definitely have so much to be proud about if they bring home the gold and maybe even a World record.

Jarvis doesn’t train under McNulty. Neither does Richards. Both of them train with Jol Finck. Guy trains with McNulty and so does Dean.