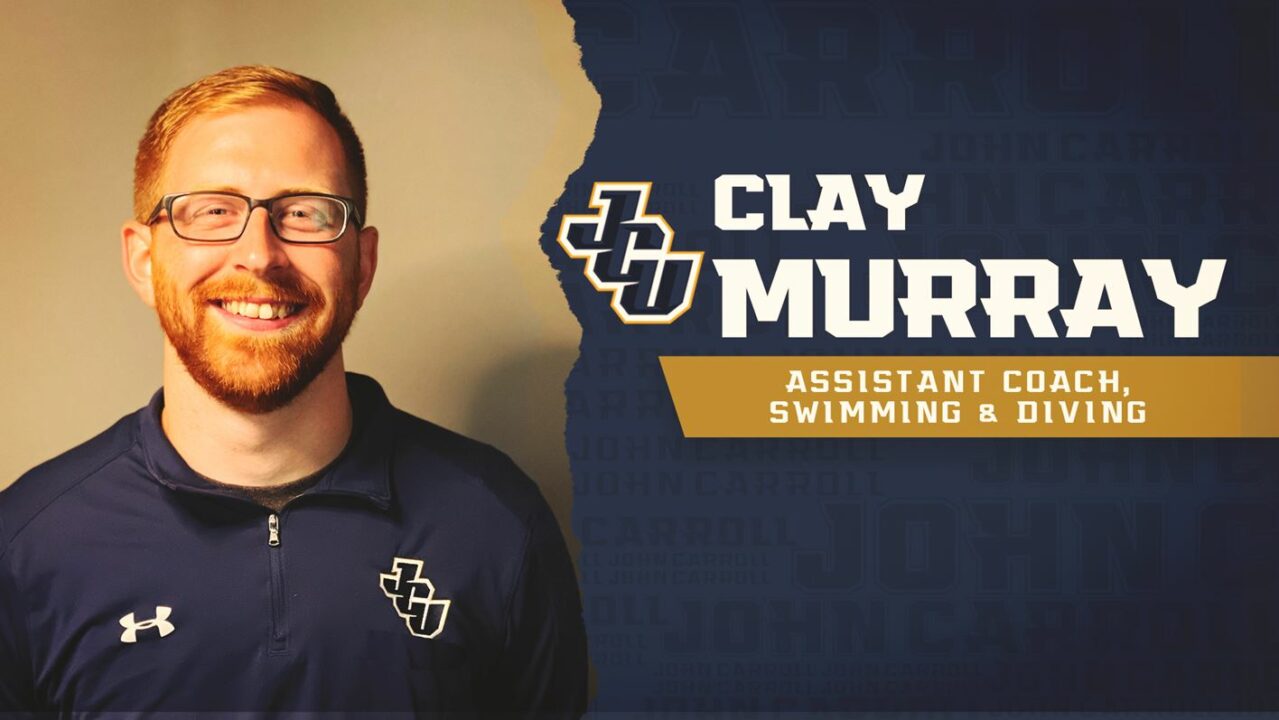 Clay Murray has been brought aboard as an assistant coach with JCU Men’s and Women’s Swimming & Diving.

“Clay will be a great addition to John Carroll University,” said Barton. “Throughout the interview process, I was very impressed with his coaching and recruiting strategies. His relevant experiences at Westminster, coupled with his desire to coach and recruit, will bode well for our future successes.”

A Keystone State native, Murray has spent the past six seasons in New Wilmington, Pennsylvania at Westminster College (a member of the Presidents’ Athletic Conference). Murray swam four years for the Titans, earning plenty of accolades. The James Buchanan High School grad was a two-time finalist at the 2017 PAC Championships as a sophomore before earning Second Team All-PAC honors as a junior. As a senior, he earned First Team All-PAC honors in the 200 free relay (1st), 200 medley relay (1st), 400 medley relay (2nd), 50 free (3rd), 100 free (7th) and the 100 fly (7th) at the 2019 PAC Championships. He graduated from Westminster with a bachelor’s degree in Child and Family Studies in May 2019.

Murray then transitioned to an assistant coaching role with the Titans. For the past two seasons, Murray served as the program’s recruiting coordinator, helping to bring in 39 student-athletes in two seasons. Murray developed a new sprint program while also designing and monitoring the program’s lifting programs for swimmers of all strokes. In addition, he managed the Titans’ social media accounts and participated in the College Swimming & Diving Coaches Association of America mentoring program.

Besides his experience at Westminster, Murray has also been an assistant swim coach with the Franklin Area Swim Team in Murrysville, PA, offered private swim lessons and coaching, and served as a lifeguard.

“I am extremely blessed and excited to be a part of the John Carroll Swimming and Diving Coaching staff,” said Murray. “After meeting Coach Barton and the team and seeing the facilities, I knew JCU would be a place I’d like to call home. I look forward to building connections with our athletes and working alongside Coach Barton as we take the program to the next level!”

Barton believes Murray will help the program continue to ascend to new heights. The Blue Streaks will be on the hunt for their sixth straight Ohio Athletic Conference Championships on both the men’s and the women’s sides in 2021-22.

“I am very excited for Clay to connect with future Blue Streaks while mentoring current student-athletes,” said Barton. “Clay is very eager to begin working on campus and he is ready to jump in as we prepare for the fall semester.”