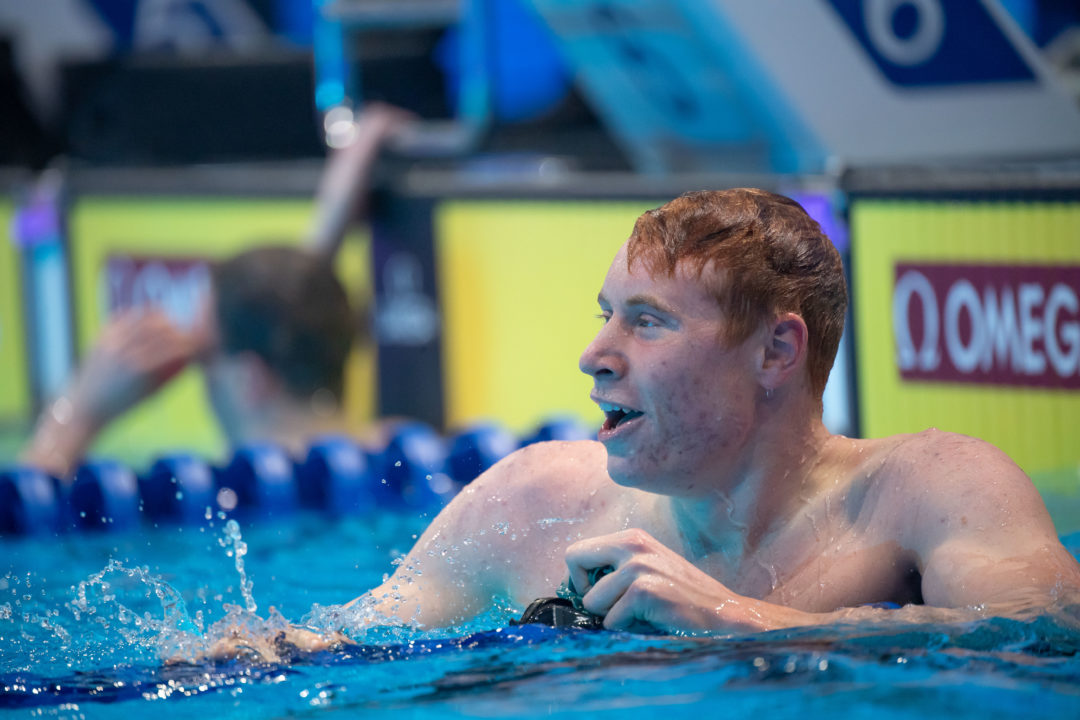 Tom Dean had COVID twice, including a severe case around New Years, before swimming under the British Record in the 200 free and onto th Olympic Team. Archive photo via Mike Lewis/Ola Vista Photography

British swimmer Thomas Dean had COVID twice, he revealed in a post-race interview Sunday. In spite of those challenges, he still swam under the British Record and finishing second to Duncan Scott by .11 seconds.

When asked post-race what his plan was heading into the Olympics, the 20-year old Dean said that “I think just have a block to be honest, leading into summer. After having COVID twice, three weeks out of the pool each time, it’s been pretty brutal coming into trials, with some real disruptions. So, if I can get sort of a block from here to the summer, who knows what might happen.”

Tom Dean’s interview after dropping 2 seconds to make his first Olympic team. Said he got COVID twice this season. Good reminder to not let your guard down and never give up! pic.twitter.com/wOcQC06bUx

It is possible, though not common, to be reinfected with COVID-19 after developing antibodies following an infection.

Dean tells SwimSwam that his first infection came in September, the week before he was supposed to fly out for the International Swimming League season in Budapest (which is why he, and a few other British swimmers, arrived late).

He then contracted a second case, which he describes as “very severe,” over the New Year. He was out of the water for 3 weeks at that time and then had 3 weeks to rebuild his strength.

Dean says that rumors of a 3rd exposure that resulted in isolation are untrue, and that he’s only been out of the water twice.

Dean trains out of the Bath training center under coach Dave McNulty.

Also in the interview:

The full interview can be seen here, starting at the 4:30 mark:

On the note of Duncan Scott swimming at Euros next month I believe Chris Spice mentioned to Andy Jameson during the men’s 1500m freestyle that those who hit consideration times/got close and a few juniors will ALL be going to Euros as one of the targeted preparation meets in the build up to Tokyo. Not necessarily expecting fast times, I think it’s more to give them as much race prep as possible.

Good idea. Not getting enough race experience contributes to underperforming at the big meet (looking at you aussies).

It helps if the comp is in Aust time & travel zone eg East Asia.

I suspect past Swim Aust personnel have used international comps to further their own networking & social lives . You are forgetting WHO are important .

I am not a fan of making unnecessary trips during this time, i think at an event like the european championships the risk of getting infected is higher and if you catch it, it might harm your chances in Tokyo. As an athlete i would only make the trip if i got vaccinated before.

Even if each bout left no lingering effects at all, just the time out of the pool must have been a huge loss.

Matsumoto and Scott come into Tokyo as very safe bets for a fast swim, they’ve proved they can do it on the international stage and they’ve looked on very good form this year. If Haas drops a 1.44 in Omaha, throw him in the same bracket.

The more unknown quantities will be Dean (Covid, little international experience) and if any of the American college stars throw down big at Trials after 2 years hard training/growing without a long course taper.

Rapsys a bit in the middle. Proven quantity at big meets, but won’t have… Read more »

Makes you wonder how much/if being out of the water for so much time helped, and if the importance of taking time off for a full-body recovery is underdone in swimming.

Maybe its time for Eddie to try that 3-week out of the water taper??

I think over training is unfortunately the norm in swimming. Full body rest is critical especially for older athletes. See: Phelps in 2015 having a great nationals after a “bad” year of training.

Maybe after the years cardio block swimmers should try taking a week or two off before going into the championship season preparation block?

Yeah I was gonna say. Everyone was like, omg 6 weeks off! You can get back to where you were within a couple months, and feel mentally refreshed after that.

I also follow track and field and recovery is MUCH more emphasized in that sport. I think it’s because in track it’s much easier to injure yourself due to the high impact nature of it. But still, I think swimming could learn from how other sports utilize rest and recovery to maximize performance. Swimming culture seems to be “grind body into dust for the entire year and then taper for 3 weeks”. Which may work for some people, but I think many could benefit from more recovery.

The yardage data and times for this past isl would be really interesting. Like who was swimming fast the whole time and who was worn down, and how much volume they were doing

I think for sprinters it isn’t as bad as for long distance athletes. I think maintaining strength at home is easier (at least cheaper) than maintaining endurance at home.

I have had a club manager telling me that young swimmers in his club did very well after forced long pauses due to Covid and that they were going to re-think their approach to competitive swimming training.

This has been a conversation around the world.

The question is going to be: who is the one willing to do the experimentation to perfect this idea?

I stopped swimming from March to November(8 months) completely b/c of covid+going away to college. I came back home and had 4 weeks of training(1:30 practices) then a 1 week taper and put up 2 best times in 100s I hadn’t dropped in for years.

That 8 month reset definitely helped and my stroke felt better than ever.

Great to see such a strong recovery from a severe case.

I wonder what kind of lung therapy he received?

Goodness gracious me, buckets of guts.