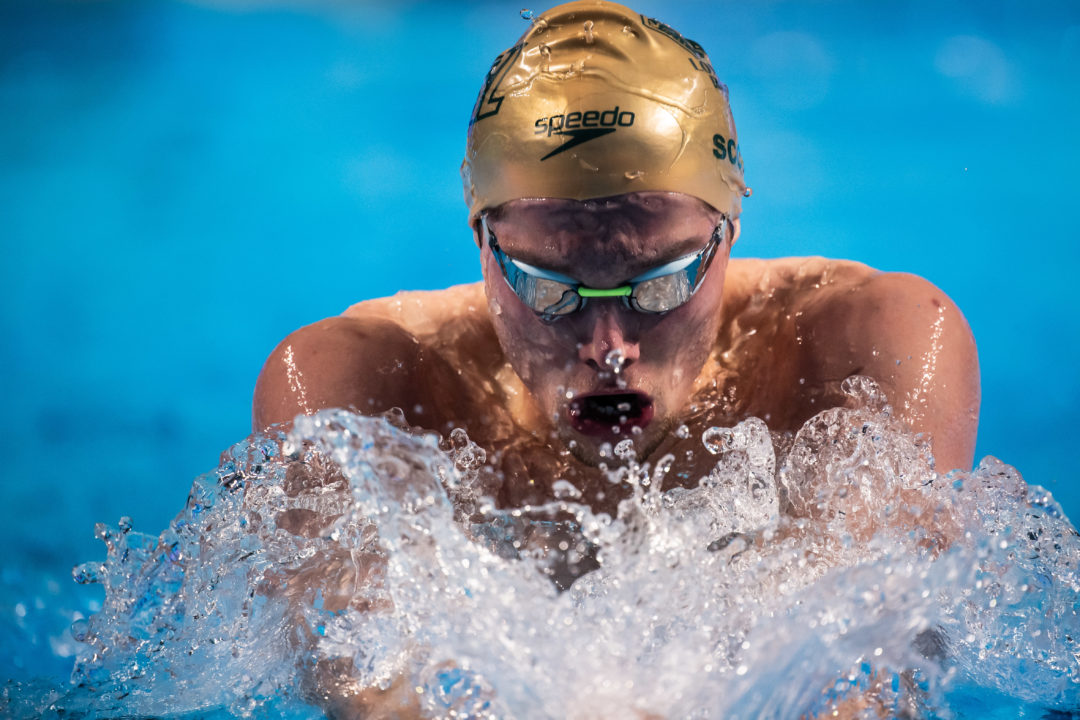 In typical Freya Anderson fashion, the European Short Course champion bided her time on the front half before surpassing her competitors to check-in with a winning time of 1:56.80 in this women’s 200m freestyle.

Opening in 57.59 and closing in 59.21, Anderson easily dipped under the British Swimming-mandated Olympic qualifying time of 1:57.28 needed for Tokyo. Her time was solid, but nearly a second off her own lifetime best of 1:56.06, a mark she registered at the 2020 Flanders Cup.

Anderson represented the only swimmer of the field to get under the consideration time, as Abbie Wood snagged silver in 1:57.48. That’s a new personal best for the New York Breaker, slicing almost half a second off of the 1:57.96 she produced at the Manchester International meet earlier this year.

Lucy Hope also got on the podium in 1:57.65, a big-time performance for the Edinburgh athlete who got under the 1:58 threshold for the first time in her career with this swim here.

With Holly Hibbott finalizing the final 4 in 1:58.11, the women’s 800m free relay looks primed to secure a wild card spot for the Tokyo Games, although their collective time is 7:50.34 compared to British Swimming’s 7:50.05.

Making the most of his opportunity to potentially make Great Britain’s Olympic squad was Bath’s Kieran Bird. The 21-year-old freestyle ace simply crushed a performance of a lifetime to hit 3:46.00, hacking nearly 5 seconds off his previous career-quickest of 3:50.90 from 2019 in the process.

Bird kept pace with the leader Tom Dean, who led along with Daniel Jervis until the final 50. That’s when Bird turned it on to burn rubber in 26.92 and get to the wall first. Bird now ties Stephen Milne as the 4th fastest British performer all-time.

Bird also enters the world rankings for the season in slot #6.

Attacking this women’s 400m IM from the get-go was 2018 Commonwealth Games champion Aimee Willmott. The 28-year-old Stirling swimmer churned out a time of 4:35.70, clearing the British Swimming-dictated Olympic consideration standard by nearly a solid second.

Willmott tightened up on the final 30m of the freestyle leg, so the fact she made the cut rendered this a gutsy swim for the woman who owns a PB of 4:33.01 as Great Britain’s 2nd fastest performer on record. In her post-race interview, Willmott stated that she didn’t even think she’d be swimming past Rio and here she is most likely making the Tokyo Olympic team to potentially end her career on a high note.

Lily Booker placed 2nd in a time of 4:43.40, while 3-time Olympian Hannah Miley finished in 4:45.00 for 3rd. Although these runners-up were outside the consideration time, they still have additional opportunities, including the European Championships should they compete there.

It was Adam Peaty‘s race to lose with the father of one punching a big-time 57.39 to now own the top 20 performances ever in this 100m breast event. He also has been under the 58-second threshold a remarkable 15 times.

The World Record holder went out like a freight train in 26.69 and closed it out in 30.70, solidifying once again that he has a very good chance to become the first British swimmer to successfully defend an Olympic title.

Joining him in Tokyo will be James Wilby, his Loughborough teammate who also pre-qualified for the Games. Wilby didn’t rest on his laurels either, however, pumping out a time of 58.76. That’s just .30 off his own lifetime best of 58.46 from 2019 en route to getting under the 59.23 British Swimming QT.

Ross Murdoch rounded out the top 3 in 59.51 for a solid sub-minute result from the Stirling star.

Peaty and Wilby rank #1 and #5, respectively, in the world this season in this men’s 100m breast.

Keeping the Olympic qualification streak going was City of Cardiff’s Harriet Jones. Jones threw down a time of 57.79 to get under the consideration standard of 57.92 by over a tenth, most likely punching her ticket to Tokyo with her victory.

Splitting 26.67/31.12, Jones turned in a new lifetime best, overtaking her 58.46 from this morning, but also her previous PB of 58.52 entering this meet. That means the Tokyo-bound flier hacked over half a second off her best-ever with her two swims here today.

Nearly making the mark was Laura Stephens, with the Plymouth Leander athlete punching 57.98 as the only other swimmer to get under 58 seconds. That’s her first outing ever under 58 for a solid showing. Alys Thomas, the 2018 Commonwealth Games champion in the 200m fly, produced 58.63 as the bronze medalist tonight.

Incredible swimming was put on display by versatile Duncan Scott in this 200m IM with the Stirling swimmer crushing a mark of 1:55.90. Entering this meet, Scott’s personal best in this event stood at the 1:56.65 he produced at the 2019 British Swimming Championships, so the man got under 1:56 for the first time in his already prolific career.

Tonight, Scott opened in 54.39 and closed in 1:01.51 to hit his fastest time ever, overtaking the previous GBR standard of 1:56.64 held by Max Litchfield since the 2017 World Championships.

Litchfield was in this race as well tonight, posting 1:58.43 as the 3rd place finisher behind his younger brother Joe Litchfield. Younger Litchfield lit it up in a new lifetime best of 1:57.74 to get under the British Swimming consideration time.

Entering this meet, NY Breakers’ Litchfield had been as quick as 1:59.17 but the man absolutely blew that to bits to check-in with 1:57.74 as a potential Olympic qualifier and now the 5th fastest Brit in history.

Scott now takes over the world rankings throne from China’s Wang Shun, while Litchfield enters the mix in slot #7 as we move closer to the Olympic Games.

Wellbrock is missing on the 400 meter LCM list. He recently swam 3:44,35 and considers of adding this event to his olympic schedule.

You forgot Lewis Clareburt he went faster than Michael Andrew..

Where does that put Duncan on the all-time list?

Should move him into 11th, right behind Philip Heintz.

Duncan Scott will be Olympic champ in the 2IM

1
0
Reply
Troll in the Dungeon
Reply to  AnEn

If he has a 20% chance of winning the gold, then he is absolutely a contender. Yet above, you have insisted so hard to say he is not a contender for gold.

Are you genuinely saying what you think, or just trying to be difficult?

Agree that Seto is the favorite, but imagine the following scenario: Scott is swimming in the lane next to Seto, a body length behind after the 150, but manages to draft off him and then rockets past in the final 10 meters. It’s not as if he doesn’t know how to do that, and before the 2019 MR, nobody thought he would do that to Nathan Adrian. And yes, Scott will be tired by then, but Seto should be, as well, though admittedly he has less in the way of relay duty.

I don’t think Seto is still the favorite now. He won’t swim any PBs this year. I say it here.

Just not in Tokyo.

I know it is COVID protocol, but the finalists in their parkas hauling their stuff to the blocks in clear plastic garbage bags has please-don’t-sit-next-to-me-on-the-319-bus energy

Great swimming across the board! Peaty and Scott were purely impressive. Kieran Bird having a breakout swim, never heard of him before. Abbie Wood setting a season best, that bodes well for later this week – could see a 2:08 in the 200 IM.

Well got to be happy with that overall. At least one CT hit in every event, and some really pleasant surprises in there too.

Women’s 200 free. Solid swims from Anderson and Wood, though Wood will be disappointed to miss the individual CT. Great swim from Hope, and encouraging from Hibbott considering where she’s been at recently. Shame they missed the relay CT, but GB should send a relay to Tokyo based on that.

Men’s 400 free. Bird with a cracker, came from nowhere really, and paced it beautifully. Dean perhaps lacking some of the endurance training, but still a PB which bodes well for his 200.