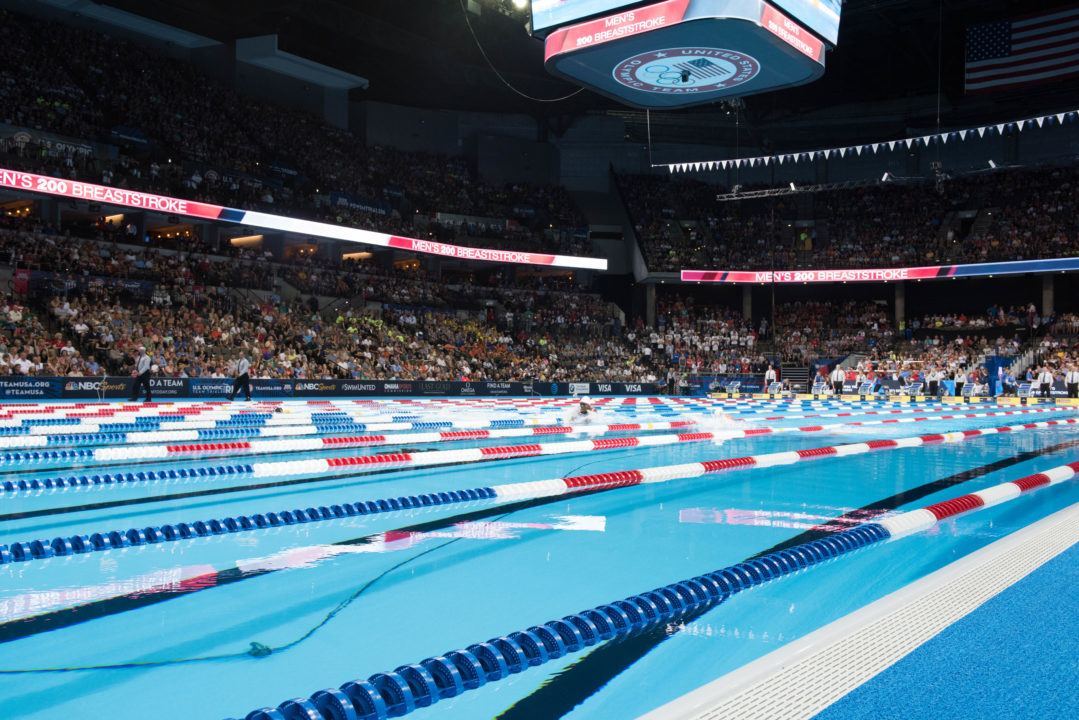 Voters were extremely bullish on the chances of a Wave I qualifier making at least a semifinal at the Wave II Olympic Trials meet. Archive photo via Mike Lewis/Ola Vista Photography

Our most recent poll asked SwimSwam readers how high a Wave I qualifier would place at the Wave II Olympic Trial meet:

Question: What’s the highest a Wave I athlete will place at Wave II U.S. Olympic Trials?

As a quick refresher, the Wave I/Wave II split was USA Swimming’s strategy for moving forward with an Olympic Trials meet amid the coronavirus pandemic. Over the previous three Olympic cycles (2008, 2012 and 2016), the Olympic Trials meet has swelled from about 1200 participants to about 1800 participants. A gathering of that size – plus coaches, meet workers, USA Swimming officials and potentially spectators – would represent a major risk for a COVID-19 superspreader event and could jeopardize the health of the U.S. Olympic team just weeks out from the Tokyo Olympics.

The new format will feature a Wave I meet for lower-ranked qualifiers. The top two in each event from the Wave I meet will advance to Wave II, which will follow traditional Trials format: the top 16 will make semifinals (in events 200-meters and shorter), the top 8 will make finals, and the top 2 will make the Olympic team (with the exception of the 100 and 200 freestyles, where the top 6 make the Olympic team).

The Wave II cuts are faster, and were based on the time seeded 41st in each event as of January, when the decision was made. All athletes ranked 41st or higher at that time were already Wave II qualifiers, but anyone who swims faster than the Wave II cut between then and June will also qualify for Wave II. That means, by definition, all Wave I participants will be ranked 42nd or lower in their event.

41 is significant – USA Swimming picked that place because it’s the lowest seed of any athlete who has made an Olympic Trials final since 2000. Only five athletes ranked 35th or lower have made a final, and the lowest seed to make an Olympic team was 38th. (More data here).

On the flip side, there is some reason to believe that seed times might be less prescriptive this year compared to previous years. With all of last summer’s season extremely limited (and in some areas completely wiped out) amid the coronavirus pandemic, many athletes are starting to see two years’ worth of time drops coming to fruition this season. There’s a chance someone would have risen well above the 41st seed last summer, but if they don’t fully peak until Trials this summer, their rise will look extraordinary.

Below, vote in our new A3 Performance Poll, which asks voters whether Caeleb Dressel will make the U.S. Olympic team in the 200 free:

I know it’s harsh but I honestly believe there’s too many people going to trials anyway. I personally still think times should be lowered to make it harder to qualify

I think a smaller meet would be terrible for development on the men’s side. How much faster can they get without shutting the next generation of Olympians on the men’s side out of the meet?

Right now the 200 free is already 1:50 low. Any faster and you could be looking at high school age boys going 1:49 that aren’t making the meet. A high school boy going 1:49 is likely one of the most promising swimmers in the country for their age – you want those kids at trials!

Why? Trials are to pick the olympic team, not “development”. They should just have a separate nationals meet later in the summer so the kids can taper. Only reason the cuts are so lax is so they can well trials tickets.

Trials are absolutely for development. That is why they have made it the selection meet for the junior travel teams.

I thought 20th or something – if they were focusing on Wave I then it would be hard to hold the taper for an extra week, though there are counterpoints to that

what happens if a kid in wave 1 goes a time that would then go on to make the team.. but when they are at the next meet they have now overdone their taper being it’s a long time and a lot of racing… not saying this will happen just curios how everyone would react

not going to happen, but if they do that’s too bad they should not have thrown away the season just to go fast at trials.