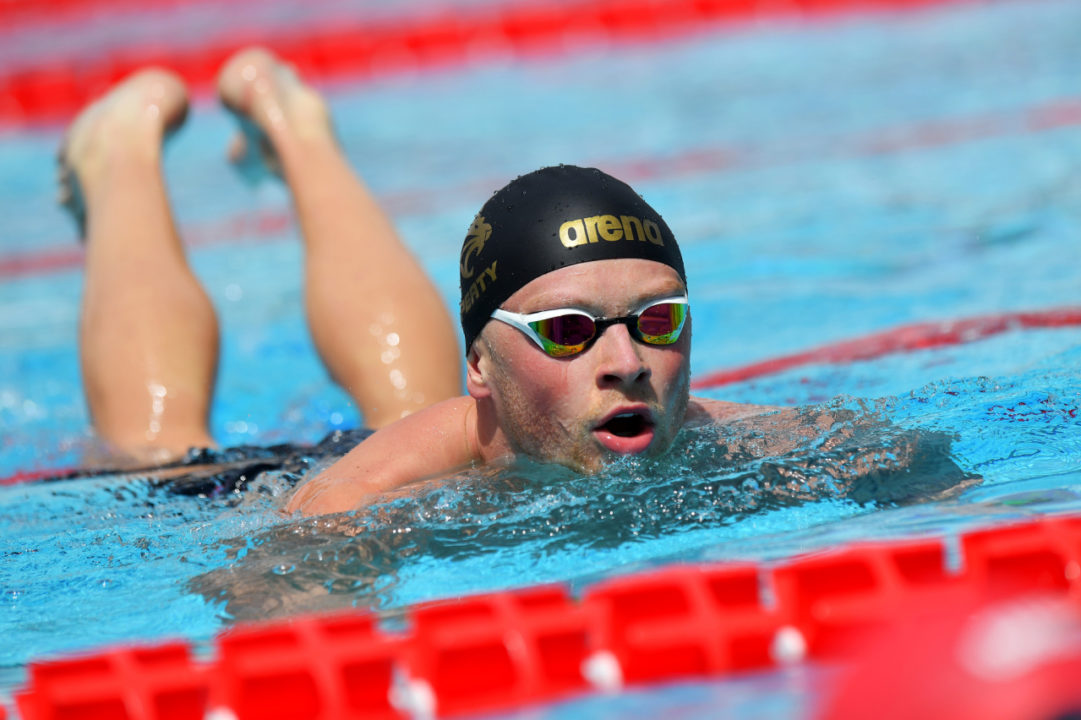 Adam Peaty recorded his 5th fastest swim in history during finals at 2021 British Trials which gives him the 20 fastest swims in the event in history. Archive photo via Gian Mattia D'Alberto / LaPresse

As if Adam Peaty‘s world-leading 57.70 prelim swim wasn’t enough, he returned to the pool for finals at the 2021 British Olympic Selection Trials to lower his season-best to a 57.39. That gives him an established lead over the rest of the world in the event this season and will easily be enough to qualify him for his second Olympic Games.

The swim for Peaty is the 5th fastest he’s ever been in the event, getting under his 57.47 from World Championships in 2017. With his two sub-58 swims on day 1 of British Trials, he has now swum the 20 fastest times on record in the event, pushing Ilya Shymanovich’s 58.29 to the 21st spot. 15 of those swims for Adam Peaty have been faster than a 58 with his fastest, the world record, being a 56.88 which he set at World Championships in 2019.

A 57.39 is well ahead of where Peaty has historically been in the lead up to the summer. Back in April 2016, prior to his Olympic gold medal-winning world record swim of 57.13 in Rio, Peaty swam a 58.41 to win British Trials. Then in April 2019, Peaty swam to victory with a 57.87 at British Swimming Championships prior to his 56.88 world record performance at the 2019 World Championships.

In a post-race interview, Peaty said that he believes the execution of his race was perfect and that he is way ahead of where he should be right now. Peaty says that he’s excited to take that confidence into the summer and “show the world that [Great Britain is] a force to be reckoned with.”

He seems hyped for that medley relay

57,3 semi-tapered with a long finish.

The lad’s going to do something unreal in Tokyo.