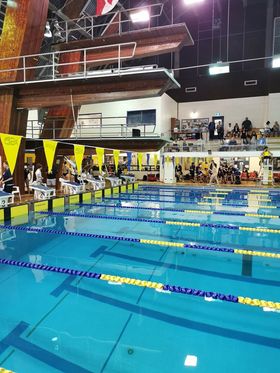 Sava will provide a massive boost to the program’s fly group, with the potential to challenge the USPORTS records in both races with small improvements.

21-year old Rebecca Smith will swim for Canada later this month in Tokyo. After that, she’ll return home to Alberta to swim for the Calgary Dinos.

Nina Mollin to Head North of the Border, Commits to University of Toronto

Holding dual citizenship in the US and Canada, Nina Mollin has committed to swim and study at the University of Toronto starting in the fall of 2022.

Laurentian University has announced that they will be cutting both their men’s and women’s varsity swim teams. The team has been led by head coach Phil Park for 2 decades and was named the Ontario University Athletics (OUA) women’s coach of the year for the 2019-2020 season. At their most recent conference championships in February of 2020, the men’s team placed 6th at OUAs while the women placed 5th, both out of 11 teams. At the 2020 USPORT Championships, Canada’s collegiate national championship meet, the Laurentian women finished in 22nd out of 23 teams while the men’s team did not score.

The decision comes amid major institution-wide cutbacks which also includes 58 of its undergraduate programs, accounting for nearly a third of the school’s course offerings according to the Globe & Mail.

Also according to the Globe & Mail, the university found itself weeks away from being unable to meet its payroll after having accumulated nearly $100 million in debt.

Earlier this year, it was announced that the Laurentian University swimming pool required at last $10 million in repairs;

Just a month and a half ago a group of former swimmers at Laurentian University made a donation of  $8,000 to assist in the necessary renovations to the pool. After receiving confirmation, however, that the donation was received, two members of that group tell CTV News in the following interview that they were informed that the money went missing:

Laurentian University swimming alumni donated $8,000 to the university's swimming program that appears to be gone.​ https://t.co/XHPa0IfQRC

On the same day that the swimming teams were to be cut, sources confirmed that the school would also be cutting both the men’s and women’s hockey programs.

A number of current and past swimmers, along with members of the Ontario swimming community have shared their thoughts on the news over the past few days via social media;

BREAKING: Sources confirm that the Laurentian Voyageurs hockey programs will be shut down.

The swimming program was axed today.

This is the second straight U SPORTS off-season that a hockey program has been axed, with Lethbridge cut in April 2020. #USPORTS pic.twitter.com/Go025c23gV

Seeing the dismantling of @LaurentianU and a swim program that developed me into who I am is devastating. I am supposed to be preparing for my PhD defence in two days and instead this is all that is on my mind. My heart goes out to all those impacted. https://t.co/v2yvIKPOqE

This team was more than just a team, we were a family and that has been taken away from all of us! https://t.co/1qReubgjOw

It’s only mentioned in passing in the article but Laurentian is Alex Bauman’s alma mater. Such a sad, sad day.

Sad to see any piece of Canadian swimming landscape shuttered. This was the home pool for Alex Baumann who broke a number of the World’s records and also won two Olympic Gold medals while swimming for this program under coach Doc Tihanyi.

Not the pool specifically but the entire building needs $10 million but LU would never explain.