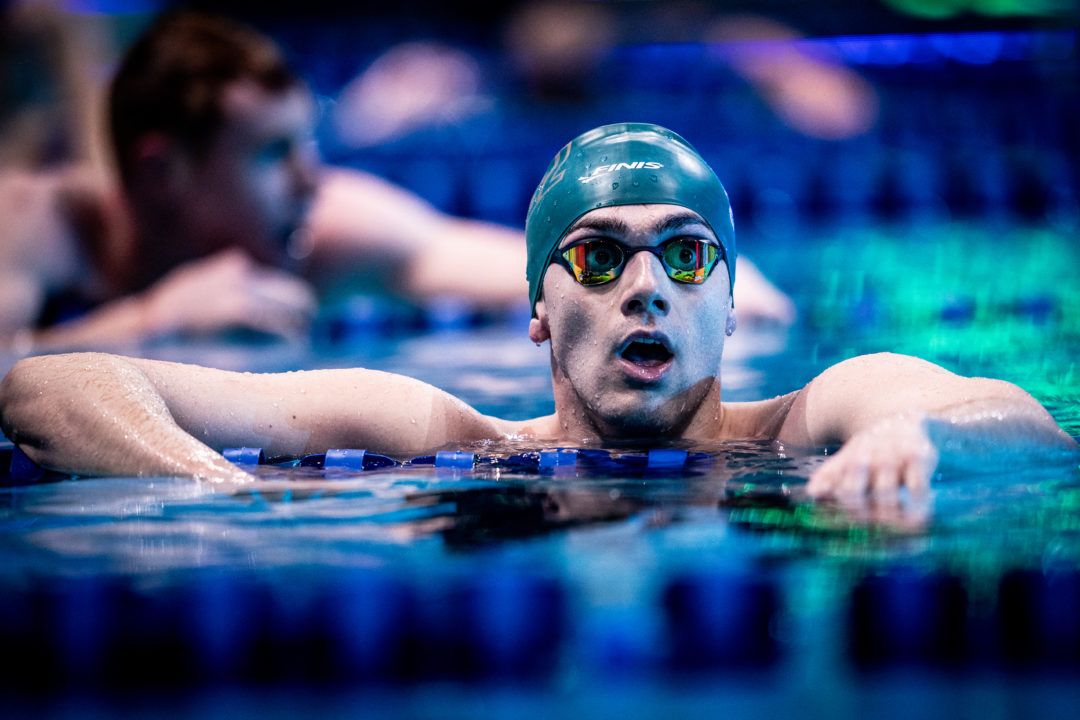 James Guy snagged the top seed in the men's 200m fly this morning in London and will try to add his name to the Olympic roster in the event tonight. Archive photo via Mine Kasapoglu

Australian singer-turned-swimmer Cody Simpson equaled the qualifying time of 51.96 in the 100-meter butterfly finals on Wednesday.

The women were well off the British Swimming-mandated Olympic qualifying time of 8:22.05 in this women’s 800m free, but Leah Crisp pulled out the win in 8:44.67. That was enough to beat out the rest of the field comfortably, with Emily Clarke finishing in 8:52.42 for runner-up and Lauren Wetherell rounded out the top 3 in 8:56.58.

Bath’s Crisp owns a lifetime best of 8:40.09 in this 800m free, so she would have had to throw down the swim of her life to get into the realm of Tokyo qualification.

Daniel Jervis of Swansea University swam a very tactical race in controlling the pace and bringing it home in a final time of 7:50.33. Unfortunately for the 24-year-old, however, he was a painful .37 outside of the British Swimming-dictated standard of 7:49.96 needed to qualify for the postponed Olympic Games. He owns a lifetime best of 7:49.05 from last year, which was a performance worthy of rendering him the nation’s 3rd fastest swimmer.

Post-race, Jervis said he felt tired but was still happy with the swim. He said he is swimming here especially for his fellow Welsh swimmers who may not be able to be in the pool due to COVID-19 restrictions.

Nearly snagging the gold at the last second was Kieran Bird, the surprise winner of the men’s 400m free last night. A time of 8:00.27 is what Bird came into this meet with, so he dropped another chunk of major time to clock 7:50.75 after hacking almost 5 seconds off of his 4free PB last night.

The swimmers will still have a chance to qualify in this event at additional meets cleared by British Swimming, including the European Championships. Of note, all 3 of these finishers got under the FINA ‘A’ cut of 7:54.31.

The Bath swimmer just sliced .71 off of his previous lifetime best of 1:55.97, complete with T-Rex arms and all, in the last 15 meters. His previous PB was registered nearly 4 years ago at the 2017 FINA World Championships. With his result here, he not only adds his name to the consideration roster, but the versatile Guy now becomes the #2 British swimmer ever in this 2fly event.

Guy now ranks as the 5th fastest 200m fly performer in the world this season.

University of Stirling’s Kathleen Dawson just crushed a massive 58.24 to check-in with an Olympic Games-worthy outing here in Tokyo. Opening in 28.25 and closing in 29.99, the 23-year-old Dawson nailed the fastest time of her career and a new Scottish record.

Entering this meet, Dawson had been super quick in 58.65 from Manchester just this past March. That already ranked her #2 in the world behind Aussie Kaylee McKeown, but the Steven Tigg-trained athlete hacked nearly half a second to sit just .12 outside of the British national record. She also now becomes the 8th fastest performer all-time worldwide in the history of this event.

‘Completely delighted’ is how Dawson described her swim, while teammate Cassie Wild also nailed a qualifying time of 59.51 as the only other sub-minute swimmer of the field. Wild was already 59.88 this morning as a new lifetime best so she also dropped major time to put her name in the consideration pot for Tokyo.

European champion in the 50m back, Georgia Davies, found herself the odd woman out, although she, too, still got under the British Swimming QT with a mark of 1:00.01.

The men’s 100m backstroke wound up being on the sluggish side, with no racer getting under 54-seconds, let alone the Olympic qualifying mark.

Joe Litchfield indeed snagged a new personal best en route to topping the podium regardless, posting 54.04 to get to the wall .08 ahead of Luke Greenbank. Litchfield lit it up already last night in the 200m IM, qualifying for the Games in that event behind newly-minted British record holder Duncan Scott.

Greenbank, who is already preselected for the Olympic Games by way of his World Championships performance in the 200m back, reportedly suffered an ankle injury, which may have impacted his swim. He touched in 54.12 while Elliot Clogg finished in 54.65 tonight. For perspective, Greenbank’s personal best sits at 53.75.

Capping off the night was a 200m breaststroke stunner, with reigning national record holder Molly Renshaw getting the job done in spades. The 24-year-old Loughborough standout raced her way to the fastest time of her life in 2:20.89. In doing so, she crushed her own previous national mark of 2:22.08, a standard she put up just earlier this year.

Renshaw split 1:07.95/1:12.94 en route to her new British mark, also entering the top 10 all-performers list. She is now ranked 10th on that list and ranks #2 in the world this season. Only South Africa’s Tatjana Schoenmaker has been faster in 2:20.17 this season, a new national record of her own.

Behind her was Abbie Wood who scored a monster time of her own in 2:21.69. That also easily cleared the 2:23.37 Olympic standard set by British swimming, adding Wood’s name to the consideration roster.

Entering this meet Wood’s personal best in this 2breast event sat at the 2:22.77 she fired off at February’s Manchester International Swimming Meet. Now, Wood’s 2:21.69 frog hops Chloe Tutton to make the Loughborough athlete Great Britain’s 3rd fastest woman ever in this event.

If the 200BS is the men’s event which has seen the most improvement in recent times then for the women it has to be the 100BK.. A huge well done to Kathleen Dawson. I don’t think there would have been many who saw that coming.

James Guy in the Cover Photo
👁👄👁

King’s cances of double gold getting slimmer with each passing day.

I just want to say that the .02 difference between the FINA A cut and the British Olympic qualifying time in the women’s 100 back is the pettiest thing ever and I love it so much.

Womens backstroke across the world is 🔥