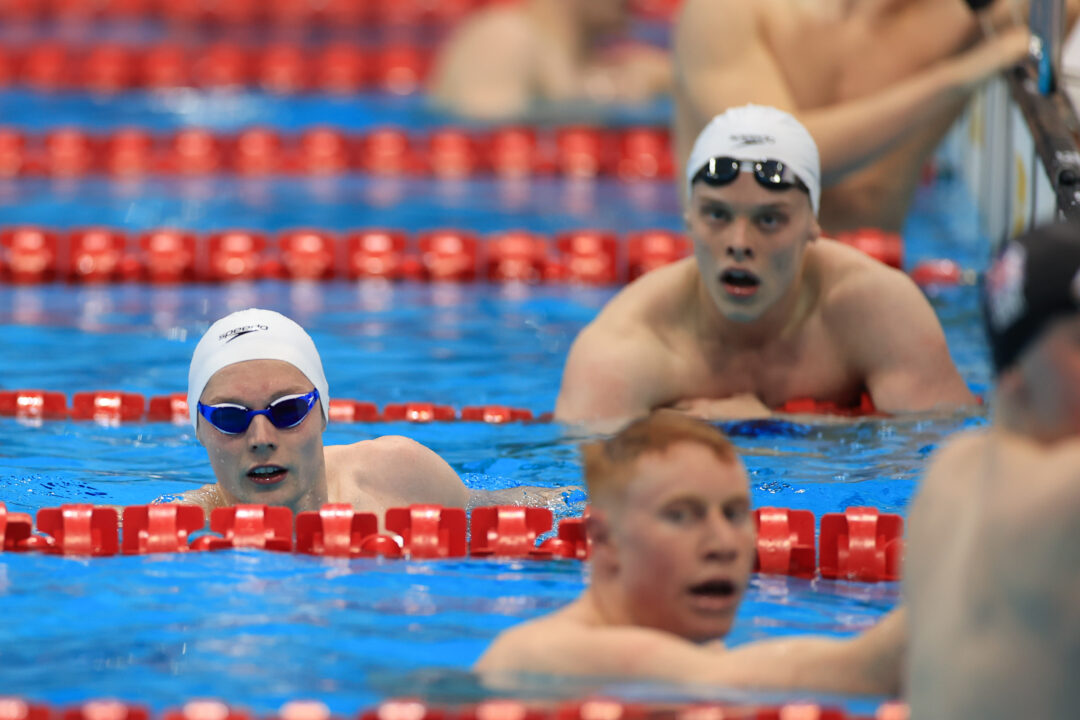 Pools and keyboards across the UK are still abuzz this morning after Sunday’s electric 200 freestyle final that saw a pair of men go under the National Record.

In the video below, which shows the full BBC coverage of the event including race video and post-race interviews, you can see the aggressiveness with which Scott and Dean went out as they swam the two of the four best 200 freestyles we’ve seen since the Rio Olympic Games.

In Tokyo, the battle for gold will be a distinction of two different styles split in pairs (depending on what we see from the Americans, still to swim their Trials event in June).

When Sun Yang swam 1:44.39 at the 2017 World Championships, he opened even slower – 51.10. That’s unsurprising, as Sun is the World Record holder in the 1500 free and more known for his endurance than his speed.

While Sun’s participation in the Olympics is still up-in-the-air, pending the outcome of a CAS re-trial of his actions during a doping sample collection in 2018, the potential for a come-from-behind win in this race in Tokyo will make it one of the most exciting on the Olympic dockett.

How was that last 50 compared to his 200 im and do we think he was fully tapered?

You can’t really compare the IM and 200 free final 50 splits because one starts out with a hand touch, stretched out in the wrong direction, while the other starts out with a foot touch — the same reason 400 IMers almost always have a faster second 50 free split than first. (IMers also get to finish with the hand touch on the final 50, as opposed to flipping over and touching with the feet.)

Different tactics though. MP always kept a reserve to turn on the jets in the last 50, whilst Scott’s last 25 was nearly Andrew-esque.

For that 2008 swim, Phelps also had the benefit of a full body LZR.

Really psyched for Tokyo. Hopefully Scott, Dean, Matsumoto, Rapsys etc can push each other to a 1:43.

Phelps had the benefit from a full body LZR, but it was also his 7th race of the meet, after almost 2,000 of racing already. I’d argue that he wouldn’t have been too much slower in a textile suit if he didn’t have the 400 IM before it.

But yeah. Tokyo is gonna be insane, not just in the 200 free but in every event.

Four years is already almost too much to wait between Olympics, five years is arghh!

GBR is going to be GOOD this year

I honestly hope they win the 4×200 free and 4×100 medley relay at the Olympics. I think it’d be good for the sport if another country shows they can beat USA relays on the Olympic stage.

Yeah, when was the last time anyone regularly made the USA look vulnerable on the men’s side? Early 2000s Australia?

France in their golden sprinting period (4×100)? Pushed US all the way in 08, beat them in 12, and pushed them again somewhat in 16. Also won a couple of World titles IIRC. Actually US have been surprisingly vulnerable on the 4×100 relay: they were beaten by Aus in 2000, and SA won in 2004, so the US only have 2 of the last 5 Olympic titles in that event.

They’ve been much stronger in the other two relays though: won all the Olympics since 2004 (Aus won 4×200 in 2000), though have been beaten a few times at Worlds (including some DQs for medley relay).

Well now they look untouchable in the 4×100 free, with Dressel and 3 other 47 flat starts

No lol, Russia has a fast field too. It’s going to come down to the last 15m in Tokyo.

Russia will be right there with the US

Disliked Keller for doing that in 2004 & nothing he has done lately has changed my mind of my dislike.

It’s the number of teams making them look vulnerable that’s the shocker. We’ve seen them challenged by one team for brief periods in the past, but having Russia, Britain & Australia are all gunning for them is a first, surely?

Maybe that’s true at the Olympics. At the World Championships, with no Phelps, they looked vulnerable to Russia, China, and France. Izotov and Agnel both had bad finals swims in the relay, China couldn’t find a 4th leg to put things together, and the Americans swam really well.

It’s beginning to feel more-and-more like the Americans are going to need Dressel on this relay to win it. But, who knows: if the Brits and Aussies and Russians can go to their trials and have breakouts, some of the Americans might too.

Yeah, I think the US will probably need Dressel… Smith/Haas/Dressel/Seliskar is my expectation, but you’ll need 2016 Haas for a shot a gold if that’s the line-up imo.

Who are the possible breakouts, aside from Smith? Foster & Urlando? Maybe Apple or Farris, given all the 1.44s are coming from men with quick 100s?

Exactly, I still remember after the 4X200 2019 WC where Dean died in the last 50, you commented about his potential. In Australia you can see 4-5 swimmers with the potential to go 1.44, as a matter of fact been waiting for Chalmers to do something special in this event, but alas nothing so far.
But going back to the US, outside of Smith, not sure where their swimmers will come from.
However in any relays free or med, male or female, never ever underestimate the Americans.

Just wait for the US olympic trials

With getting Covid twice, yes

I think for me I need to see more before I would start talking about 1:43 let along 42. With how far over on Scott’s lane line he was on that last 50 I just wonder if he would have closed as fast from lane 6. I don’t doubt he could do a 1:45 low leading all the way, but getting even a mild tow down the last lap will make a difference.

Not trying to take anything away from Tom Dean, it was a great swim, and tactically that’s what he should have done. However, come July he might have different neighbours which could make a difference. Its quite exciting that with how close the top 200 free times… Read more »