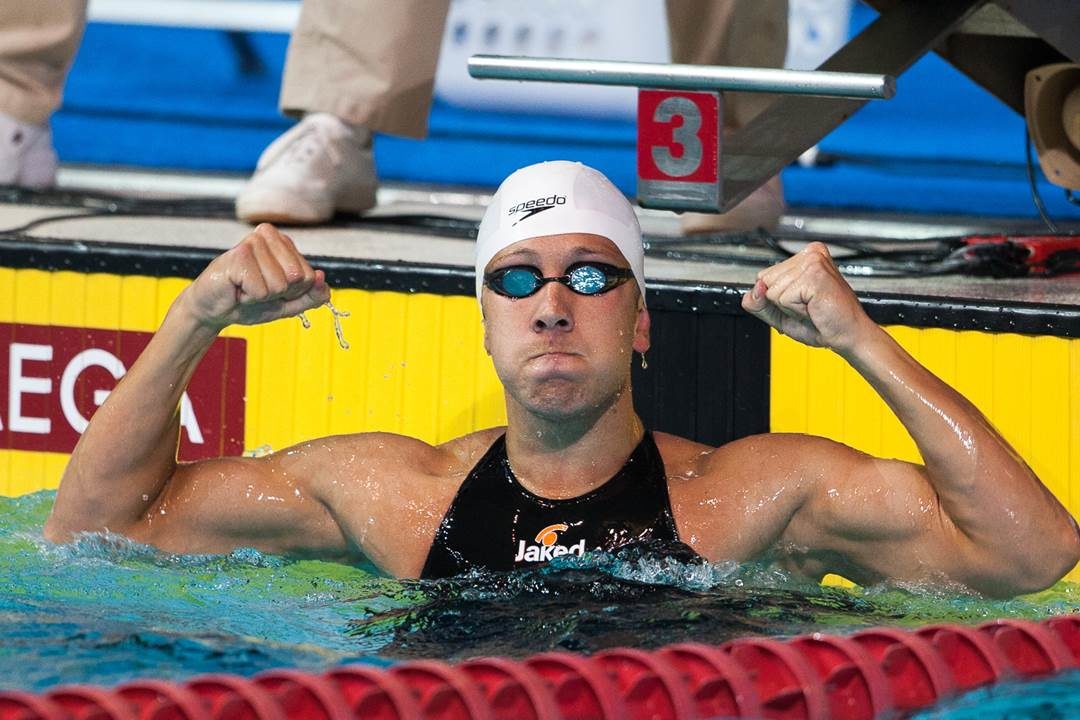 Mark Gangloff is having early success at North Carolina but could the lure of his alma mater be enough to pull him back to The Plains? Archive photo via Tim Binning/TheSwimPictures.com

Yet another big-time college head coaching position has opened up, with the announcement on Monday that Auburn and head coach Gary Taylor are parting ways “mutually.”

Auburn was the country’s dominant program throughout the 2000s in collegiate swimming & diving, but there’s some question about where the gig ranks in the echelon of college swimming positions now. A decade ago, it would be comfortably top 3. Now, after two head coaches leaving under less-than-positive circumstances, it probably can’t claim that anymore.

It also used to come with a dominant salary, which has equalized more with other top programs in the last few years.

While no longer holding status where every coach in the country will at least think about applying (like what we’re seeing with the Texas men), Auburn is still a top 15, or even top 10, job. It’s a destination – a gig that any associate head coach or mid-major head coach would take and hope to be their last coaching job.

The school also has strong incoming freshmen classes, with #19 Nate Stoffle, HM Jacques Rathle, and BOTR Henry Bethel coming in this fall on the men’s side, and #14 Rebekah Hamilton, #19 Ellie Waldrep, and HM Abby McCulloh coming in on the women’s side.

The first names that are going to jump to everyone’s mind when they think of “alumni coaches” aren’t going to happen – Dave Marsh, who built the Auburn empire, and Dave Durden, the head coach at Cal.

There are, however, a lot of really qualified coaches who make sense here – either because of Auburn ties or being in Auburn’s general aura via the SEC. The swimmers from that golden era of Auburn swimming are now all coming into their own as coaches, which leaves a wide talent pool to choose from.

There are two names that we view as the obvious front-runner, but below we’ve laid out a list of 6 top candidates for this job. The top 3 probably have a pretty big gap ahead of the rest of the group here.

(A shakeup at Texas could rewrite this story, but most observers expect Wyatt Collins, their assistant, to get the promotion).

The Auburn Athletics Director Allen Greene doesn’t have any deep swimming roots that would obviously impact this decision – like we’ve seen at other programs, including rivals Alabama. His previous stop was at Buffalo, which recently cut its men’s team, and before that he worked at Ole Miss and Mississippi State, neither of which have swim programs. At 43, he’s one of the youngest Power 5 ADs in the country, and he came to Auburn in 2018, well after the peak of Auburn swimming had passed. He is the AD who hired Gary Taylor, though, so maybe we’ll see a reaction to that via a preference for an individual with head coaching experience.

1. Ryan Wochomurka, University of Houston head coach – This one seems like the most obvious choice. Wochomurka is an alum who was a member of national championship teams in 2003, 2004, and 2005. After graduating, he quickly rose to associate head coach at Louisville when that program was rising to prominence, and he’s now built a powerhouse mid-major women’s program at the University of Houston that has won 5 straight AAC conference championships. The Cougars have had 7 individual invites to the NCAA Championships in the last 2 seasons (which is the same number as the Auburn men have had).

Aside from being head coach of a combined-gender team, Wochomurka has checked pretty much every box to demonstrated preparedness for a gig like this. With the ties as an alumnus, he seems like the obvious front-runner for the position (and other alums have expressed support for him as well).

2. Mark Gangloff, North Carolina head coach – Yes, North Carolina is a great job. Yes, Gangloff has in just 2 seasons shown success there in his first NCAA head coaching gig. Yes, that would be a short stint to hop so quickly. But, Gangloff is one of the great Auburn swimmers, and he might not get another chance to return to his alma mater. He’s also very popular among his peer group (of Auburn alumni), so there will be some weight for his return.

3. Ozzie Quevedo, Alabama associate head coach – We don’t really know what’s going on at Alabama with the inexperienced Margo Geer taking over as head coach next season. But if her jump is a signal that Quevedo will be looking elsewhere, Auburn is a logical fit. Quevedo was an assistant at Auburn from 2013-2016. He’s also an alum, having earned 6 All-America honors and an NCAA title while with the Tigers. With a stop at Florida State between his Auburn and Alabama gigs, he’s been around big time programs. Quevedo doesn’t yet have collegiate head coaching experience, though.

4. Jeff Dugdale, head coach at Queens University – Another alumnus with strong ties to David Marsh and the David Marsh era, Dugdale has built the singularly-dominant program at the Division II level of NCAA swimming. While D2 swimming to D1 swimming isn’t the same gap as we’d see in many sports, like football, it’s still a whole different ball game. Prior to Queens, Dugdale was a coach at SwimMAC, and also spent a few years as an assistant coach at Duke. Dugdale won three letters at Auburn from 1989 through 1991 (prior to the golden years), and out of college he spent some time coaching at Auburn.

5. Stefanie Williams Moreno, Georgia associate head coach – At this point, I’m fully convinced that Williams Moreno is waiting for head coach Jack Bauerle to retire and will then take over at Georgia. But, she’s still a top candidate for every job that opens up, especially in the SEC. A great swimmer for Georgia, and now a stout coaching resume between Ohio State and Georgia, Williams Moreno also doesn’t have head coaching experience.

6. Gideon Louw, Auburn assistant coach – Things were pretty messy during Taylor’s tenure as head coach, with 9 athletes entering the transfer portal this season alone. That could mean the AD will want to clean house and get a fresh start. That being said, Louw is one of the best sprinters in program history, has shown the ability to coach sprinters via his work with Bowe Becker at Minnesota, and was a member of the last Auburn NCAA Championship team. It feels like Louw would maybe need to head elsewhere for a few more years of seasoning and then circle back to land as Auburn’s head coach.

I feel like this is gonna come out either tomorrow or Friday. No way Auburn moves slow on this.

I would love to see Tyler McGill as head coach or at least a prominent member of the AU staff.

Why is no one talking about John Hargis. He has created a great TEAM atmosphere at Pittsburgh and developed a great sprinter.

Jason Calanog. How is his name not coming up for a job like this?

Karl Krug – former Auburn swimmer, lighting it up at SPAC in Atlanta. Some of his swimmers are already there or committed there. How many NAG’s have his kids taken down in the past year? Very innovative, and understands what it takes to be successful at Auburn.
Also, glad they made this announcement this week, or Poppell would have been a top choice.

Would be nice to see women as head coaches of a program.

Gold Medal Mel. He can get revenge against Tennessee for making him swim all those 200 flys.