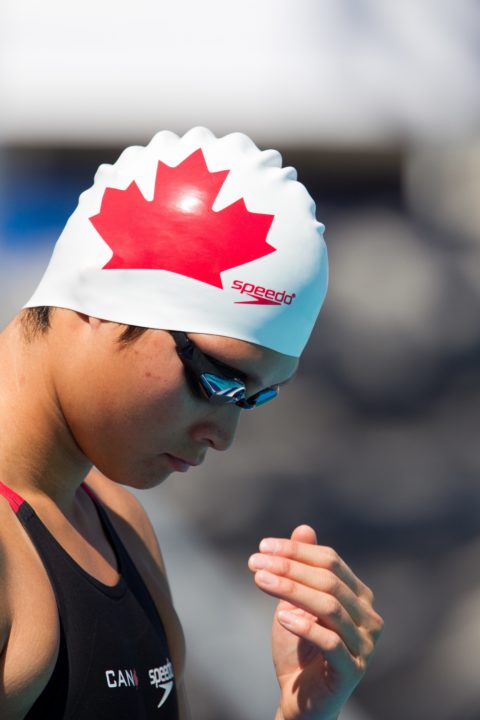 WOMENS 100 FREE Canadian national team veteran Victoria Poon took the number one seed in the 100m free this morning with a 54.91. Alyson Ackman from Point-Claire was second in 55.34, Michelle Williams from NYAC was just behind her heading into finals in third with a 55.53.

Samantha Cheverton and University of Georgia swimmer Chantal Van Landeghem  also will be in the final tonight. The top four swimmers are going to try and attempt to qualify a women’s 4x100m freestyle relay.

Yuri Kisil from Cascade swim club took the top spot in the men’s 100m freestyle being the only one to crack the 50 second barrier with a 49.87. Second was Dominique Massie-Martel with a 50.35. Expect third and fourth seeds Luke Peddie and Coleman Allen to be a factor on tonight’s final too.

Chris Manning took the 8th seed with a 51.01, but he’s got national team experience so he could threaten the field for a position on the team from an outside smoke.

Fiona Doyle from the University of Calgary Swim Club grabbed the first seed in the 100m breast, however will not be able to compete in finals because she’s a competitor for Ireland. Rachel Nicol will be heading into finals with the top seed posting a 1:09.04 this morning.

Tera Van Beilen and Ashley McGregor from last night’s 200m breaststroke final will be competing as well, so you can for sure count on them to bring the heat. Kierra Smith grabbed the ninth seed, but since Doyle won’t be in the final she’ll just squeak in with a 1:11.23.

Richard Funk, winner of the 200m breaststroke last night posted a 1:01.46 to head into tonights 100m breaststroke final in first. Igor Kozlovskij from Lithuania took the second spot in 1:02.31, but will not be able to compete in finals.

Jason Block grabbed third in 1:02.56, but should be faster tonight. Sergey Holson had a great CIS Championships so he could make an impact on the race all the way from an outside lane as he grabbed the eighth seed with a 1:03.42

Emily Overholt grabbed the top speed over a tough field in the women’s 400m IM with a time of 4:46.55. Marni Oldershaw, Erika Seltenreich-Hodgson, and Vanessa Treasure finished just behind her to round out  a very close top four.

Kierra Smith will also be in the 400m Im final, grabbing the seventh seed, but will have to swim it shortly after her 100m breaststroke final. Seltenreich-Hodgson won the 400m IM in a new CIS records to start off her first CIS Championships as a freshman for UBC so you know that she has the potential to step it up in finals. She also competed for Canada’s national team last year in both IMs.

Alec Page will head into the 400m IM final as the favorite after posting a 4:20.08 this morning. Page has the most experience out of the entire field, representing Canada at both the 2012 Olympics and 2013 World Champs.

Luke Reilly grabbed the second spot with a 4:24.67. Alec Page should be able to run away with a win here, but nothing is set in stone.

Sinead Russell added another final to her plate tonight taking the third seed with a time of 28.89. Brooklyn Snodgrass finishes just ahead of her in 28.78.

Paige Miller grabbed the top spot with a 28.62 to round out the top three. Hilary Caldwell and Dominique Bouchard will also be in the final after last night’s 100m backstroke.

Russell Wood has the chance to go two for two tonight, taking the top seed in the 50m backstroke final. Last night he won the 100m back, just getting under the time standard he needed to qualify for the team.

Don’t count out Matthew Swanston and Charles Francis who will also be in tonights finals taking the second and seventh seeds respectfully.