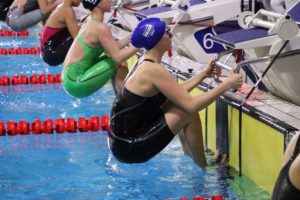 The 17-year old Aviv Barzelay is the Israeli National Record holder in the 200 long course meter backstroke and will head to Texas A&M next year. 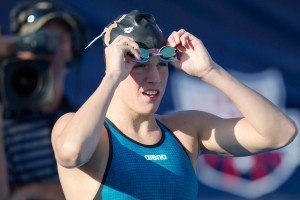 The 2016-2017 season has brought us a Texas women’s team we would hardly recognize just a couple of years ago. Tonight, Tasija Karosas teamed up with Madisyn Cox, Remedy Rule, and Rebecca Millard to take down a Big 12 record to start off their conference championships. 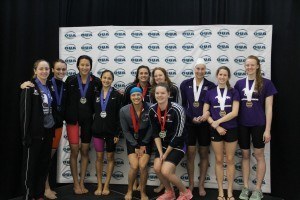 Kylie Masse on the podium after setting the 50m backstroke Canadian record en route to gold in the 200m medley relay. 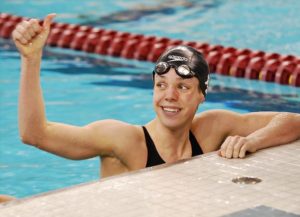 In one of the quickest back-and-forth exchanges Canadian records have ever seen, the short course 50m backstroke Canadian record is back in the hands of Paige Miller. 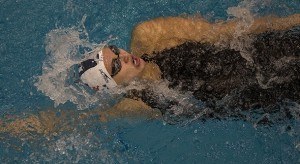 Paige Miller was born on July 30, 1991 in Toronto, Ontario to parents Albert and Janet Miller. She attended Mayfield Secondary School and swam club for COBRA Swimming. She was a member of 200 and 400 meter medley relays that set Canadian Senior National records, and boasts a victory in the 50 meter butterfly from the 2009 Canada Cup as a high schooler.

Miller took her talents to the United States and found her way to Texas A & M University. She had an immediate and positive impact on the Aggie Program, and rounded out her freshman season with very successful conference and NCAA championship meets. She was a member of the winning 200 yard medley relay and won the 100 yard backstroke (52.43), while also earning 2nd place finishes in the 200 yard freestyle relay, 400 yard medley relay, and 100 yard butterfly (54.82). Miller helped break two school records as a member of both medley relays at NCAA’s, and placed 8th in the A final of the 100 back. She would carry her own school record into her sophomore year.

As a sophomore, Miller continued to post exceptional times. She lowered her 200 yard IM time to 1:56.95, but added over two seconds in finals, finishing 15th overall. She raced to 51.89 in the 100 back prelims, once again breaking the school record. She went on to finish 7th overall in the back. Miller was also a member of the 5th place 200 medley relay and 4th place 400 medley relay.

Her junior year, Miller once again broke her 100 back record after going 51.55 in prelims of the 100 back at the SEC Championships. Texas A & M had recently moved from the Big 12 Conference to the SEC. She swam 51.62 in finals to take the title. Her backstroke time was an NCAA Automatic ‘A’ cut, as was her 52.07 100 butterfly. She also posted a ‘B’ cut in the 200 IM. Miller climbed to 6th in the 100 back at NCAA’s and put herself into the B final of the 100 fly to finish 14th after missing a finals swim in the fly as an underclassman. She was also a member of the 200 and 400 medley relays, both of which placed 5th overall.

Miller took her record-smashing habits into her senior year as an Aggie. At the 2013 Art Adamson Invite, she walked away a double champion, after winning both the 100 fly and back in times of 52.37 and 51.36, respectively. Her backstroke time, once again, broke her own school record and earned her an ‘A’ cut. She earned ‘B’ cuts in the 100 fly, 200 IM and 200 backstroke.

A DQ in the 200 IM didn’t seem to faze Miller on day two of the 2014 SEC Championships. She had already swam the fly leg on a 4th place A&M relay in the ferocious SEC, and she had squeezed into the A final of the 100 fly. Her time of 52.99 in finals was a tad faster than her morning swim, however it didn’t move up any places. Day three, which featured the 100 back, was Miller’s big race. She had swam only .10 faster than Georgia Bulldog star freshman Olivia Smoliga in prelims, and finals was even closer. Miller pulled out the big win, dropping down to a new personal best and school record of 50.91 to hold off Smoliga, who was 51.00. She led off the A&M 400 medley in 51.71, not as fast as her individual, but it was still a tenth better than Smoliga, and A&M would go on to win the event.

At the NCAA Champs, the senior helped the 200 and 400 medley relays to 4th and 2nd place finishes, respectively, competed in the 100 fly (but did not final) and 200 back (1oth), and took the 100 back NCAA title. Before getting into her individual 100 back, note that her 50.70 lead-off from finals in the 400 medley relay was a personal best and a new Texas A&M record. Individually, her time of 50.97 was the fastest in prelims– the only one under 51.00. In finals, she felt the heat from Cal’s Cindy Tran and Stanford’s Felicia Lee. The trio finished in a bunch, in 50.77, 50.81, and 50.91, with Miller on top, followed by Tran and Lee, respectively. This couldn’t quite eclipse her lead off from the medley relay, but it was still an incredibly impressive swim in its own. Her 100 fly was just off of her time from the SEC Champs, while her 200 back, which she didn’t swim at any big meets during the season, was a 1:52.84 (personal best/school record).

She ended up going 1:00.48 in the fly at the Speedo Sectional Championships (Southern Zone) several months later to edge closer to breaking the 1:00 barrier.