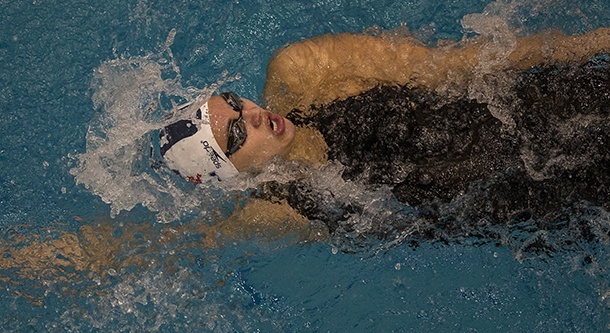 Kylie Masse of the University of Toronto broke the Canadian record in the 50 backstroke Current photo via Michael P. Hall

The Ontario University Division Championships took place this past weekend. The teams in the OUA are split up into two divisions. Competing in the Fairweather Division were the top 5 ranked teams with Toronto, Western, McMaster, Ottawa, and Guelph, and the remaining teams competed in the deBray division including Waterloo, Laurentian, Wilfred Laurier, Brock, Queens, York and Carleton.

The Fairweather Championships took place at the University of Toronto, with two timed finals sessions taking place on Saturday evening and Sunday afternoon.

Both the University of Toronto men and women went wire-to-wire to defend their divisional titles, both topping 1000 points. The Guelph women upset Western to grab 2nd place by a mere 5 points, while the Western men finished 2nd, well ahead of 3rd place McMaster.

The highlight from the weekend was Toronto’s Kylie Masse breaking the Canadian record in the 50m backstroke, coming in at 26.84. That swim broke the record Paige Miller set just two weeks prior at Age Group International that was also held in Toronto, where she went 27.00 breaking Chantal van Landeghem‘s 2013 record of 27.01. Masse was the top point getter on the women’s side, winning all four of her individual events for a maximum 80 individual points. Along with the 50 back she won the 200 back (2:06.23), 200 IM (2:12.05) and 100 back (58.50). The Toronto women also swept the relays. Paige Schultz also scored the maximum 80 points, with wins in the 50, 100 and 200 free and the 50 fly. Masse posted the top time in the country in all 3 backstroke events, while Schultz posted the top time in the 100 free.

The Guelph women managed their 2nd place finish on the strength of 56 and 55 point performances from Emily Anzai and Tara Mallory.

The deBray Championships took place at the same time as the Fairweather Division, with the meet taking place at Brock University in St. Catharines.

The team race was similar to last years battle, with the Waterloo men and Laurentian women running away with the team titles, and the battle for the overall score coming down to the wire. Queens University ended up finishing 2nd on the women’s side, edging out 3rd place Waterloo by 60.5 points. On the men’s side, the Laurentian men finished 2nd, with Wilfred Laurier in 3rd place 32.5 points behind. Laurentian edged out Waterloo for the overall score by a mere 18.5 points.