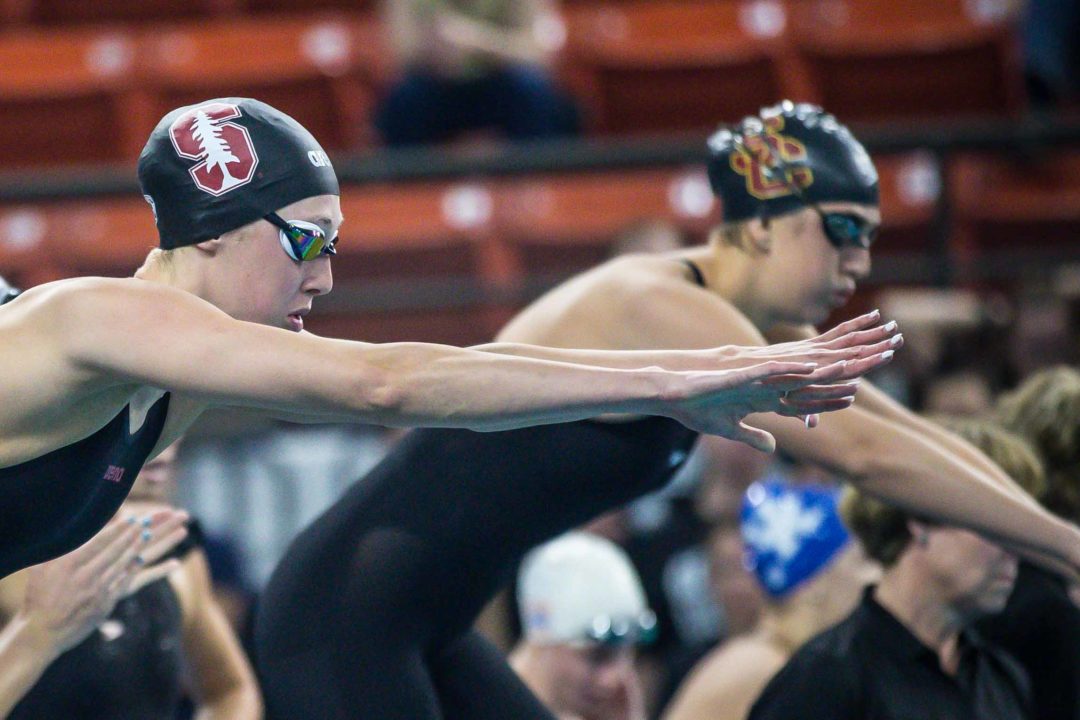 Stanford opted to put Taylor Ruck on both the 200 free and the 400 medley relays this morning. Since she was already on the 800 free relay last night, that'll mean she'll need to sit out either the 200 medley or the 400 free relay, with the former seeming to be the more likely option. Current photo via Jack Spitser/Spitser Photography

Last night we looked at what some of the lineup decisions for the 800 free relay could mean later on in the meet. With two relays this morning, the picture got even clearer, and right now, it’s looking some of the risky decisions by some of the top teams may pay off.

Stanford opted to put Taylor Ruck on both the 200 free and the 400 medley relays this morning. Since she was already on the 800 free relay last night, that’ll mean she’ll need to sit out either the 200 medley or the 400 free relay, with the former seeming to be the more likely option. But so far, it’s looking like the right call. The Cardinal put out their expected lineup of Ruck, Lauren Pitzer, Amalie Fackenthal, and Anya Goeders on the 200 free relay, knocked half a second off their seed time, and easily secured a spot in the A-final.

The 400 medley relay was another story, however. This morning they opted for a totally different lineup than they used at Pac-12s, going with Lucie Nordmann (52.01), Zoe Bartel (59.58), Katie Drabot (52.16), and then Ruck (46.44) on anchor this morning, instead of the lineup of Ella Eastin (51.26), Allie Raab (59.56), Fackenthal (52.85), and Pitzer (47.37) that they used last month. They cut it close, finishing 8th, and while they may ended up having almost a second margin over the 9th-place Arizona squad, meaning they may have been able to get away with using a different anchor, Ruck’s 46.44 leg kept them from coming even closer to missing the A-final.

Chances are we’ll see a different lineup from the Cardinal tonight, with either Ruck moving to back, where she should be around 50-low, and Pitzer on free, or else putting Eastin on back and leaving Ruck on the anchor leg.

USC left Louise Hansson off of the 200 free relay this morning, after using her on the third-place 800 free relay last night and they still managed to improve on seed time and nearly make the A-final, taking 9th. That relay was only ranked 18th nationally heading into the meet, so going from projected to not score to 9th in prelims without Hansson looks to be a win for the Trojans, especially if they can win the B-final tonight.

On top of that, Hansson was able to make the A-final in the 200 IM, picking up some big points there, and the Trojans needed Hansson just to make the B-final of the 400 medley relay, putting up the 12th-fastest time of the morning with Hansson leading off.

It’s actually more likely that Veronica will swim all 5 relays given that she scratched the 50 free this morning.

Yes you were rough on the SHE-Vols last night! If they can muster a win in the 2FRR, Brown wins, Small wins and their 4Med moves up the podium is still very possible! This can be a great come back story!

Why can’t you just call them Lady Vols instead of insulting nicknames?

How is “she” insulting

SHE is not insulting, SHE-Vols is. They are the Lady Vols, not the SHE-Vols. Using an incorrect name is insulting.

Would it be insulting if during MENS NCAAS if I refer to the MEN VOLS as HE-Vols? Pretty pwease!!!??

Do we really have to attribute malice to a positive comment?

Yep when one is a SHE-Vol Marmmy! OK if it offends, I shall evermore refer to our beloved female Tennessee Swimmers and Divers as Lady Vols! Go Lady VOLS!!!!!

Burchill scratched the 50 free, so I feel like it’s likely that Georgia will use her on all 5 relays.

UGA’s Burchill didn’t swim the 50 so maybe 5 relays? Maybe she is doubling 100 fly/200 free tomorrow? They need a lot of help this year scoring points!

So much analysis coming out — thank you, SwimSwam stuff, for tirelessly cranking away at the results and their implications! Much appreciated/fun to read.

Taylor Ruck is a Canadian with an American funded scholarship.

lol the only foreign swimmer in the NCAA

Do not believe for a nanosecond that Staaaaanford is funded exclusively by “Amerikun dollers” there is a ton of yen, rubels and funny money in the coffers.

Does Cal lead off Abbey tonight and get the lead or anchor and chase?

Where is Allie Raab? She was Stanford’s fastest 100 br at Pac12s, and was also in the 4 M.R. I don’t see her on the psych sheets either. Perhaps swimswam already did a quick note about this, and I’ve missed it. That might have helped their prelim relay – but at least they got 8th. They can only move up with a different line-up. Ruck, Bartel, Eastin, Pitzer…my guess on this one for tonight.