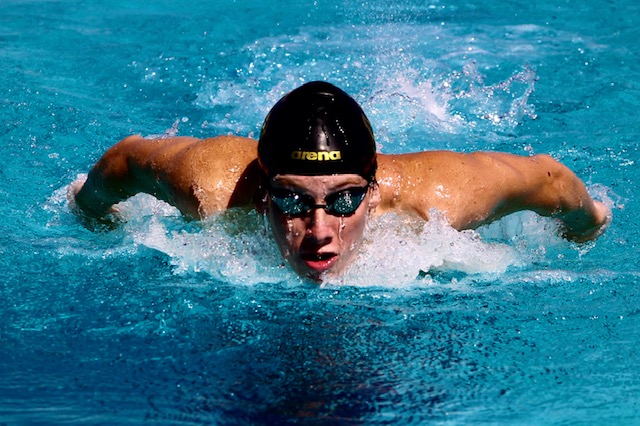 USC commit Daniel Matheson blasted a state record in the 500 free at the AIA D2 Swimming and Diving State Championships.

Arizona hosted their Division 2 (medium size schools) state championship meet on Saturday. In order to reduce the number of athletes and spectators on deck at the same time, the meet was split in two, with boys competing in the morning and girls at night. Each meet was then divided into three “shifts”, with time in between to allow athletes to warm up and cool down.

The boys meet in the morning was highlighted by Sunrise Mountain’s Daniel Matheson setting a new meet record in the 500 free, leading the field with a time of 4:20.64. He broke the state record held by former Horizon High School and Arizona State swimmer Ben Olszewski, set in 2014. Matheson also added another first-place finish in the 200 free, swimming the second-fastest time in state history (1:37.17).

In the 200 IM the top spot went to Canyon del Oro junior Riley Stewart. This marked Stewart’s first State Championship title, as last year his top finish was a third place in the 100 breast.

Also topping the podium was Campo Verde’s, Jeremy Graunke. Graunke swam to a first-place finish in the 50 free, touching in 20.13. This swim made him the 4th fastest boy in Arizona high school state history, falling only behind Ryan Hoffer, Herbie Behm, and Jack Blake. Graunke will be swimming under Behm next year at Arizona State.

Grant Stoddart, a senior at Arcadia, won the 100 fly for the second straight year, taking the title with a time of 49.42.

Posting the top time in the 100 free was another Arizona State commit, Campo Verde’s Christian Osterndorf. Osterndorf touched the wall in 44.83 to beat Jeremy Graunke by half a second. The swim moved him to just outside of the state all-time top-10 times.

In the 100 back, Higley sophomore Keaton Jones took the top spot in 50.45. Jones’s entry time of 49.91 is fast enough to earn him the 10th fastest swim in state history. He also owns the 7th fastest time in AZ history, a 49.70 from last year’s state meet.

In the final individual event of the boy’s meet, senior Andrew Schou touched first in the 100 breast (58.23). He beat out last year’s runner up in the event, Ironwood Ridge’s Carter Dooling.

The girl’s meet was kicked off with Salpointe Catholic winning the 200 medley in 1:48.18. Helping them pull off the victory was Sasha Ganem, who had the fastest 50 back split of the event (27.76).

The second event of the meet, the 200 free, was also won by a member of the Salpointe Catholic team, junior Sydney Even. Even posted the top time at the meet for the second straight year, winning this year with a time of 1:51.42.

In the 50 free Paige Treptow, a junior, repeated as state champion. She touched out Makena Malkemus by just .02 to win the event in 23.87. Malkemus would later win the 100 free, beating out Katherine Rink, who was a part of the winning 200 and 400 free relays. Malkemus won in 52.18.

The 100 fly went to first-time state champion Rachael Lytle. Lytle, who is committed to swim at Northern Arizona next year, won the event in 56.74.

Kylie Ney, a junior, topped the podium in the 500 free for the second straight year. She held off a late charge from Danielle Gleason to touch the wall first in 5:02.39.

In the final individual event of the day, the 100 breast, Sydney Blackhurst won her first state championship title. Blackhurst, who finished third in the event last year, won in 1:03.70, over a second faster than her time last season.