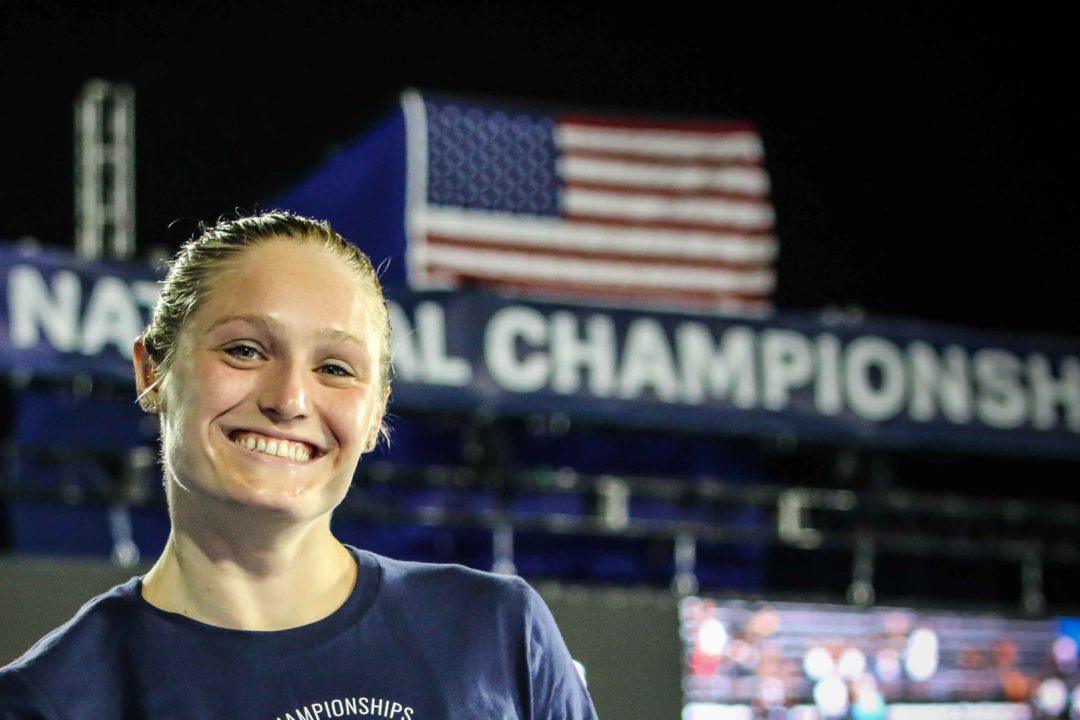 The American Kelsie Dahlia finished the meet with 4 wins and 3 Meet Records, while Italy's Gabriele Detti, in his 2nd meet back from injury, swam to the world's #2 time in the 400 free. Archive photo via Jack Spitser/SpitserPhotography.com

After breaking a Meet Record with a 25.07 in the 50 fly on Friday, American Kelsi Dahlia broke two more on Saturday to finish her run at the 2018 Nico Sapio Trophy.

The first came in her best event, the 100 fly, where she swam a 55.00 to beat both countrymate Kendyl Stewart (56.47) and Italy’s top butterflier Ilaria Bianchi (57.64). That time for Worrell is only .26 seconds from her best, and is the faster than any other American has ever been in short course meters. In total, it ties a 2017 Sarah Sjosstrom swim as the 5th-best performance in history.

Not long after, Dahlia broke another Meet Record in the 50 free. There she swam a 24.02, which broke the old mark of 24.33 set by countrymate Madison Kennedy at a prior edition of the meet. Kennedy finished 2nd, also under her old record, in 24.28, while Lia Neal finished off the American sweep by placing 3rd in 24.66.

Dahlia’s swim also moves her into position as the 7th-fastest American in the history of the event.

Two more victories gave Dahlia a total of 4 at the meet.

Hers were 2 of 12 Meet Records broken at what turned out to be the fastest edition yet of the annual meet.

“Gabriele Detti looks quite healthy”… this guy since 2014 races 1 year and then disappears from meets for another year, to reappear the Olympic year or for world championships, every time claiming some kind of physical injury (but everyone can see him everyday training regularly in Ostia). Every time he reappears after the long stop, healed from the injury, he blows top world ranking times.
The therapies prescribed by his doctors must be miraculous… It would be interesting knowing what kind of TUE he gets.

Indeed the performances of some Italians, especially Detti’s should be closely analysed. His long absences in the past years have always been followed by sudden astonishing improvements and top world times. The Italian swimming environement is going through a difficult time due to the recent (finally) Magnini doping ban but more has still to come out.

Indeed the performance of some Italians should be analysed. Detti is one of them. His long absence from official meets are always the prelude for astonishing performances and after the Magnini doping ban Wada should investigate more deeply the Italian swimming federation.

Good catch, I was looking at rankings updated before the weekend.