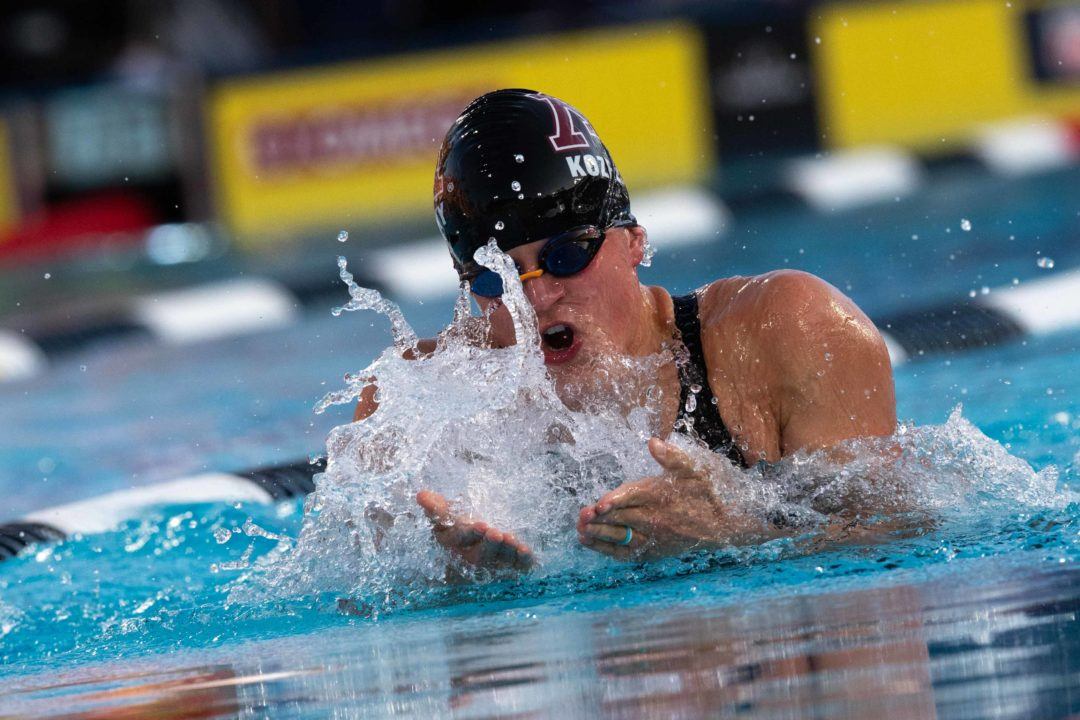 The swimming roster is a little thin, but the Golden Gophers, as usual, have one of the best breaststrokers in college swimming along with a field of talented divers. Archive photo via Mike Lewis/Ola Vista Photography

Chantal Nack and Zoe Avestruz are solid sprint freestylers, though they are most impactful as relay assets, while Mackenzie Padington, the best all-around freestyler on the roster, is best at the 200 and up.

22.5/49.4 sprinter Katherine Wagner, who transfers in from ASU, will be a much-needed addition to a thinly-spread sprint group. It may prove tough for the Gophers to send a 200 or 400 free relay to NCAAs without a hammer leg, and they just lost sprint relay specialist Danielle Nack to graduation. Wagner will be a nice boost, though, and there is still enough on the roster for the Gophers to surprise for a relay final appearance.

Padington leads the charge for the distance group in Minneapolis, but she is without much of a supporting cast. She hit a PR 4:38.54 at the Minnesota Invite last year, but added significantly at NCAAs. She would’ve scored in the B final with that mid-season time, and she’s definitely a candidate for making a finals appearance in this event next year. Meanwhile, Chantal Nack has continued to progress over the last couple of years, and her 4:40.47 was a two-second season best and PR, leaving her 23rd at NCAAs.

The Gophers are pretty thin when it comes to their IM group. They just graduated Brooke Zeiger, the best 400 IMer in school history, which is a huge loss.

Breaststroker Lindsey Kozelsky‘s 1:57.78 was the team’s best and only under 2:00 last year for the 200 IM, and while that’s a decent time, it won’t score at NCAAs and Kozelsky typically focuses on the breaststrokes, anyways. Sophomore Abbey Erwin hit a PR 4:14.74 in the 400 for a glimmer of hope, but none of the freshmen nor transfers are high-impact IMers.

Minnesota will be hard-pressed to replace Danielle Nack, who set school records in both butterfly races this spring. That is, unless they want to switch up the medley relays. Nack was the medley butterflier, but backstroke specialist Tevyn Waddell might slot in as the new relay butterflier since WSU transfer Emily Cook, who is also a backstroker, is in town.

Nack was a 51-low flyer, and Waddell hit a PR 52.31 last season. Kaia Grobe and Zoe Avestruz were 53’s last year, so there are definitely some options here, but Minnesota won’t have the individual presence it did last year in this discipline with Nack.

Zoe Avestruz was a much sought-after backstroker in high school, but she’s found her college groove in sprint free. She was 53.21 last year mid-season but 51.98 in high school. The 100 back would still be an ideal third event for her individually to add to her 50 free and 100 free, and hitting another sub-52 would give her a great shot at scoring, but time will tell if she will focus on that event this season.

Lindsey Kozelsky is one of the top breaststrokers in the country, and she should be in contention for the runner-up spot behind Lilly King in the 100 and a potential A final repeat in the 200. She’s also the main reason the medley relays will be relevant nationally– besides King, she was the only sub-58 split in the 400 medley relay finals (57.49) and tied Stanford’s Kim Williams for a field-second-best 26.50 split in the 200 medley relay finals.

This is a thinner roster than we’re used to seeing with the Gophers, but there’s no doubt they have a proven star in Kozelsky and enough talent to field strong relays. Look for their medleys to make noise again this year, especially the 200 medley, which is looking for an encore after cracking into the A final in 2018.

Padington, Nack, and Avestruz hold things down in the freestyle, but it would be hugely beneficial if a newcomer can step up and become a relay asset for Minnesota. It certainly helps, though, that they return 2018 NCAA 1-meter diving champ Sarah Bacon as well as NCAA scorers Kristen Hayden and Morgan Justus.