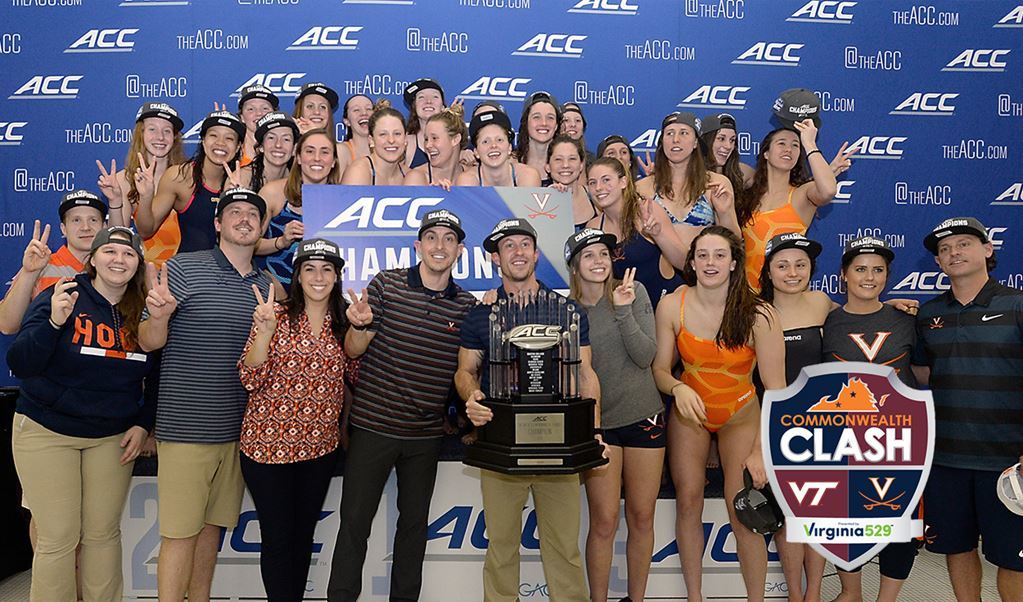 UVA is without a doubt in a stronger place heading into this season than last season, thanks in large part to the #1 recruiting class this year. Stock photo via Virginia Athletics

The Cavaliers followed up their stellar ACC Championships title from 2018 with a 2nd place finish in 2019. Although they dropped a place at ACCs, UVA finished 3 places higher at NCAAs, taking 6th, and scoring 27 more points versus 2018.

The NCAA performance was built on the back of 104 individual points, with an additional 84 coming from relays. Moreover, none of UVA’s seniors last season scored individually at NCAAs, meaning they return all of their individual points. Paige Madden was the highest scoring Cavalier, racking up 38 points in a breakout meet for the sophomore. The 400 free, 200 medley, and 400 medley relays all finished 8th as well.

Eryn Eddy, who competed on the 3 free relays at last year’s NCAAs, is the only major loss from last year’s sprint group. Eddy was the 4th fastest Cavalier in the 50, 100, and 200 free last season. However, that loss is more than accounted for with the incoming freshmen class. Namely, UVA brings in the #1 recruit, Kate Douglass. Douglass comes in with a 21.67 50 free, which would have led the Cavalier roster last year, and would have qualified for the A final at NCAAs. Douglass is also 47.98 in the 100 free, which would have qualified for the NCAA B final, and 1:45.16 in the 200, which was just outside qualifying for finals.

Rising senior Morgan Hill was the fastest 50 and 100 freestyler on the team last year, swimming 21.6/47.4, and making the B final in both at NCAAs. She also swam a 1:43.2 200 free last season at ACCs, but didn’t swim the event individually at NCAAs. Paige Madden, a rising junior, is more middle-distance oriented, but led the team in the 200 free last year with a 1:43.03 that earned her 5th place at NCAAs.  Also returning is 2019 NCAA scorer Megan Moroney (rising senior), who was 1:44.2 in the 200 last season, but was a slightly slower to take 16th at NCAAs.

The Cavaliers were already looking great in the 500, bringing back the reigning NCAA runner-up in Paige Madden. They added to the group, however, with incoming freshmen Caroline Kulp and Madelyn Donohoe looking likely to compete in the 500 at NCAAs this year as well. Kulp comes in with a 4:43.9, and Donohoe a 4:44.2. Emma Seiberlich (rising junior) was 2nd on the team last year with a 4:43.4, and missed out on finals at NCAAs. Freshman Ella Collins also brings in a 4:47.5.

Donohoe and Kulp also bring in promising miles. Donohoe has a personal best of 16:01.6, which would have placed 16th at NCAAs last year. Kulp brings a 16:24 to the table, but as it stands fight now, it seems more likely she’ll swim the 200 fly on Day 4.

The UVA breastroke squad looks primed for huge performances from their breaststroke squad this year. Rising sophomore Alexis Wenger is the 4th fastest returning 100 breaststroker in the NCAA from last year. She also finished 32nd in prelims of the 200 breast last year. Fellow rising sophomore Kaki Christensen was an A finalist in the 200 breast last year, also finishing 39th in the 100. Incoming freshman Ella Nelson comes in with a 2:07.59 200, which would have earned her a spot in the NCAA A final last year.

Morgan Hill returns at the helm of this fly group after taking 7th in the 100 at last year’s NCAAs. Hills’ 50.84 was the fastest on the team by over a second, but freshman Kate Douglass brings a 51.74 into the mix. Douglass’ best time would have gotten her into the B final at NCAAs last year, and is just .47 seconds off what it took to qualify for the A final. Additionally, rising sophomore Jessica Nava‘s best time from last season, 51.99, would have tied for 16th in prelims at NCAAs. Lexi Cuomo comes into her freshman season as a 52.01, just barely outside what it took to final last year.

Rising sophomore Julia Menkhaus was the fastest 200 flyer on the team last year, clocking a 1:55.16, with Nava and rising junior Abby Richter behind at 1:56.18 and 1:56.30 respectively. Had Menkhaus swum her best time in prelims at NCAAs, she would have safely qualified for the B final. Cuomo is strong for an entering freshman here as well, coming in with a 1:59.96. Fellow freshman Katie Cronin adds a 1:58.80 to the group.

Abby Richter was an NCAA B finalist in the 200 IM last year, and returns as the 7th fastest swimmer from last year’s NCAAs. Richter’s 1:55.92 was the fastest on the team by far last year, but Kate Douglass comes in with a stellar 1:56.09. It seems very likely as it stands right now that Douglass will swim the 50 free over the 200 IM, but given she’s in scoring range in both, we can’t rule out the possibility she swims the IM. What we can be sure of is that Ella Nelson will swim the 200 IM. Nelson comes in with a 1:57.80, behind only Richter and Douglass in terms of personal bests. Kaki Christensen dropped roughly 3.5 seconds in the 200 IM last season, going down to 1:59.5. If she has a similar improvement this season, Christensen would be right on the edge of scoring range in the event.

Richter was the only Cavalier to compete in the 400 IM at NCAAs, finishing 30th with a season best 4:11.84. Nelson comes to the program with a 4:10.10, which would have led the team last year. It will likely take a bit under 4:10 to make it back to finals at NCAAs, so there will need to be improvement for any of the Cavs to score.

UVA didn’t score any diving points last year, and they lost their only NCAA-qualifying diver, Kylie Towbin, to graduation. There is potential here, however, as the Cavaliers bring in two accomplished freshmen divers. Jennifer Bell has won multiple YMCA National titles and is a two-time finalist at USA Senior Nationals. The other freshman, Charlotte Bowen, was a two-time All-American in high school. Additionally, rising senior Sydney Dusel earned a 2nd place finish in 3 meter at the ACC Championships last season, but failed to make it out of NCAA Zones.

To put it simply, UVA’s relays look excellent heading into this year. They benefit from only having lost 3 of the 20 relay spots from last year. Moreover, those lost spots came from Eryn Eddy, who was the 4th fastest swimmer on the team in each relay distance. In the 200 and 400 free relays, Eddy will be replaced by Kate Douglass. Douglass is extremely fast in the 50 and 100 for an incoming freshman. The 200 free relay finished 17th in prelims at NCAAs last year. That race was something of a fluke, as Morgan Hill who had been 21.68 the day before, led off in 22.29. Along with the expectation that Hill will be faster, the relay benefits from swapping Eddy’s 22.39 with Douglass, who is already a 21.67 flat-start. Similarly, Eddy was 48.30 in the 400 free relay, and will be replaced by the 47.9 flat-start Douglass.

The 800 free relay is a little trickier. Eddy was 1:45.25 anchoring the relay last year, which came in 9th at NCAAs. Douglass comes in as a 1:45.16, and Kyla Valls was 1:45.66 last year. Freshman Ella Collins is a 1:46.83, and Madelyn Donohoe, Caroline Kulp, and Ella Nelson are all 1:47s. There’s a large pool of swimmers who could breakout and take that 4th spot, along with Hill, Paige Madden, and Megan Moroney.

UVA is without a doubt in a stronger place heading into this season than last season, thanks in large part to the #1 recruiting class this year. Kate Douglass is the #1 recruit in her class for a reason – she is incredibly versatile, especially for relays, and can be counted on to score NCAA points as a freshman. This class also addressed some of the weakest areas from UVA’s roster last year. The Cavaliers didn’t score any points in either the mile or the 400 IM. They bring in Madelyn Donohoe, who is already right on the edge of being able to score points at NCAAs. Ella Nelson would have been the fastest 400 IM’er on the team last year, and enters the NCAA just off what it takes to score at NCAAs. Nelson is a triple scoring threat, however, as she enters with a 200 breast potentially fast enough for the A final, and a 200 IM that isn’t far off at all from scoring range.

Lexi Cuomo enters the NCAA just outside what it takes to score in the 100 fly, and Caroline Kulp brings a potentially dangerous 500 free to the table. Also, on paper, all 5 relays should already be faster than they were last year. Given that relays score double points, that improvement will add up quickly.

Outside of NCAAs, the depth this UVA roster has sets them up nicely to be able to take the ACC title back from an NC State team that lost more than the Cavaliers did. They also have every event covered with highly competitive speed, so they will likely be one of the toughest dual meet opponents out there this season.

I truly believe that the UVA women will be the NCAA champions this year or next.

Left out a great 200 backstroker and 400 IMer- Erin Earley

Coach DeSorbo is awesome for sure.

Kaki is not on the team anymore

anyone know why kaki christiansen isnt on the roster?