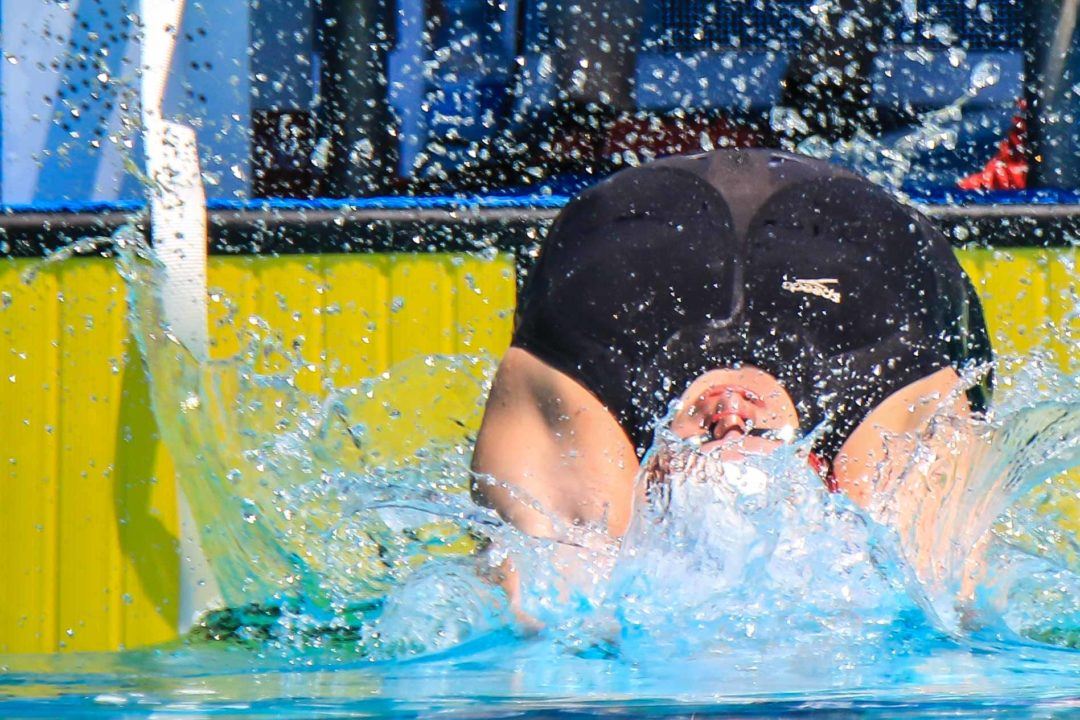 Claire Curzan continued the torrid pace she's been on this year, racking up yet another National Age Group record with a 50.18 in the 100 back tonight Archive photo via Jack Spitser/Spitser Photography

Claire Curzan continued with the torrid pace she’s been on this year, racking up yet another National Age Group record with a 50.18 performance in the 100 back tonight at the 2020 TAC Titans Blizzard Blitz Meet, where times for junior swimmers will count towards USA Swimming’s 18& Winter Championships.

Coming into 2020, Curzan’s best time in this event with a 51.23, a time she hit twice in a week in March of 2019 while still 14. Curzan then went 51.01 at the Titans’ intraquad meet this July, before knocking the better part of a second off of her best tonight. That 50.18 makes her the 13th-fastest woman of any age in the event, according to USA Swimming’s rankings.

In other events, Curzan’s TAC Titans teammate Charlotte Hook won the 200 fly by over three seconds with a time of 1:54.11, just a little over a half second off of her best time from this June. Yesterday, Hook won the 200 free and took 2nd in the 400 IM.

On the men’s side, we were treated to a trio of repeat winners. In the 50 free, Michael Cotter knocked nearly a second off of his lifetime best today, to earn the win. He came with a best time of 21.05, then went 20.38 in prelims and won finals with a 20.19. Cotter also hit a lifetime best in winning the 200 free yesterday, and he’s looking increasingly like he could make an immediate impact on any free relay when he arrives at NC State in the fall of 2022, and NC State should be absolutely stacked with 50/100/200 free types in a few years.

That 50 free tonight was one of the closer races, as Cotter got the touch just ahead of 19 year-old TAC Titans teammate Michael Ivy, who also hit a lifetime best with his time of 20.26.

Results for the championship heat of the boys 100 back do not appear to have been uploaded to Meet Mobile, and will be added in when available.

So excited to see where she ends up committing.

Way to go Claire! Swimmers that have pool space right now are extremely lucky that they are able to train at the same velocity they’re used to. Haven’t seen as much success from the west coast swimmers as they have more restrictions for combating Covid. I feel bad for those swimmers, because they can barely train.

Some conversions are absurd to say the least

Backstroke is a different animal LC. That being said her best time is 1:00.00 so she its possible for her to have a massive time drop. Also I have a feel she’ll make the final at trials.

There is no doubt that she will be a contender at the 2021 Trials.

Will Curzan nab the 100 back spot in Olympic trials? That would be insane. Also, who will swim the back leg in women’s medley relay prelim in the Olympics?

Are we all forgetting that Bacon, Baker and Smoliga exist?

While this is an immensely impressive time, we don’t know how well Curzan can translate this into LCM.