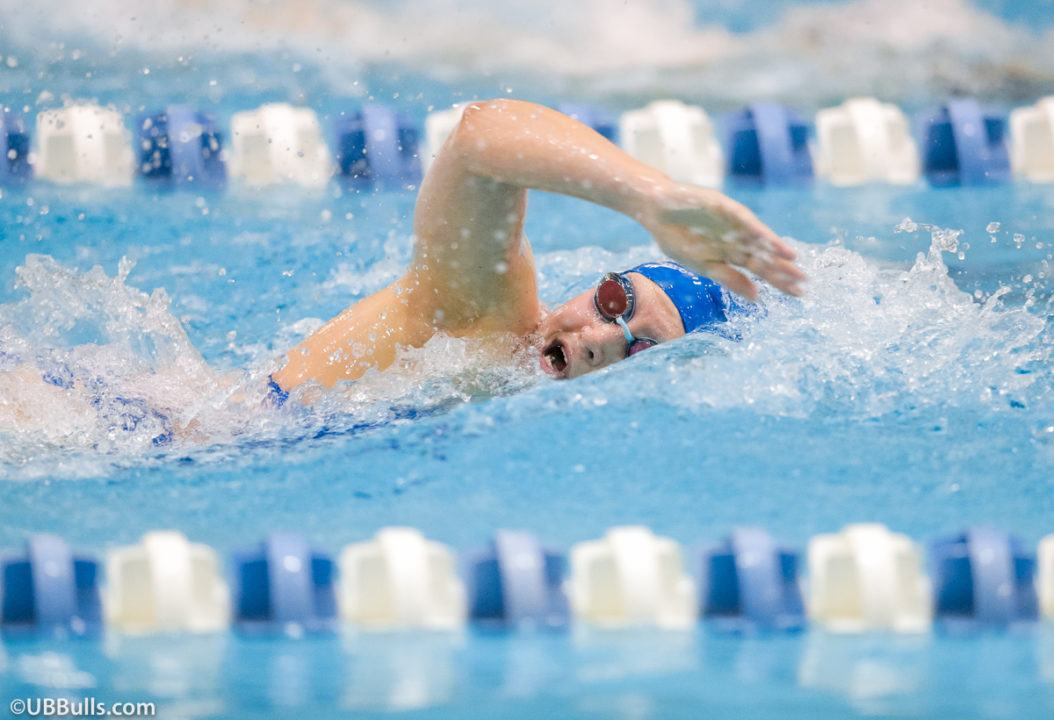 The University at Buffalo earned their first dual win over Ohio University since 2012-2013 (and only the second in program history) today, coming up with 161 points to Ohio’s 139.

ATHENS, OH – For the first time since 2012-13 and just the second time in program history, the University at Buffalo women’s swimming & diving team improved to 2-0 in MAC play with a 161-139 road victory over Ohio on Saturday afternoon.

“It was a great team win today,” said head coach Andy Bashor. “We were very couragous in our races as the team responded after being down after the first break. They came out of the break strong and won several events to take the lead and the win.”

The Bulls were able to collect wins in five individual events on Saturday afternoon and senior Megan Burns led off the day with a victory in the 200 freestyle in 1:51.33 while teammate Olivia Sapio came in second in 1:52.04, a career-best time. In the next event, 100 backstroke, the Bulls were able to go 1-2 once again as freshman Nicole Roitenberg won the race in 57.04 and Andrea Ernst collected second place in a season-best time of 57.59.

With the team score close, the Bulls were able to close out the final event of the meet, the 200 freestyle relay, in style. Buffalo was able to collect a first and second place finish to earn 15 points and post the 161-139 victory. The team of Jillian Lawton, Sarah Baxter, Eve Kosten and Megan Burns won the event in 1:34.72 while the squad of Katie Burns, Andrea Ernst, Catherine Schultheis and Sapio took home second place in 1:35.55.