Brugnoni Breaks 100 Back Record As Statesmen Lead NSISC; Argo Women Out Ahead 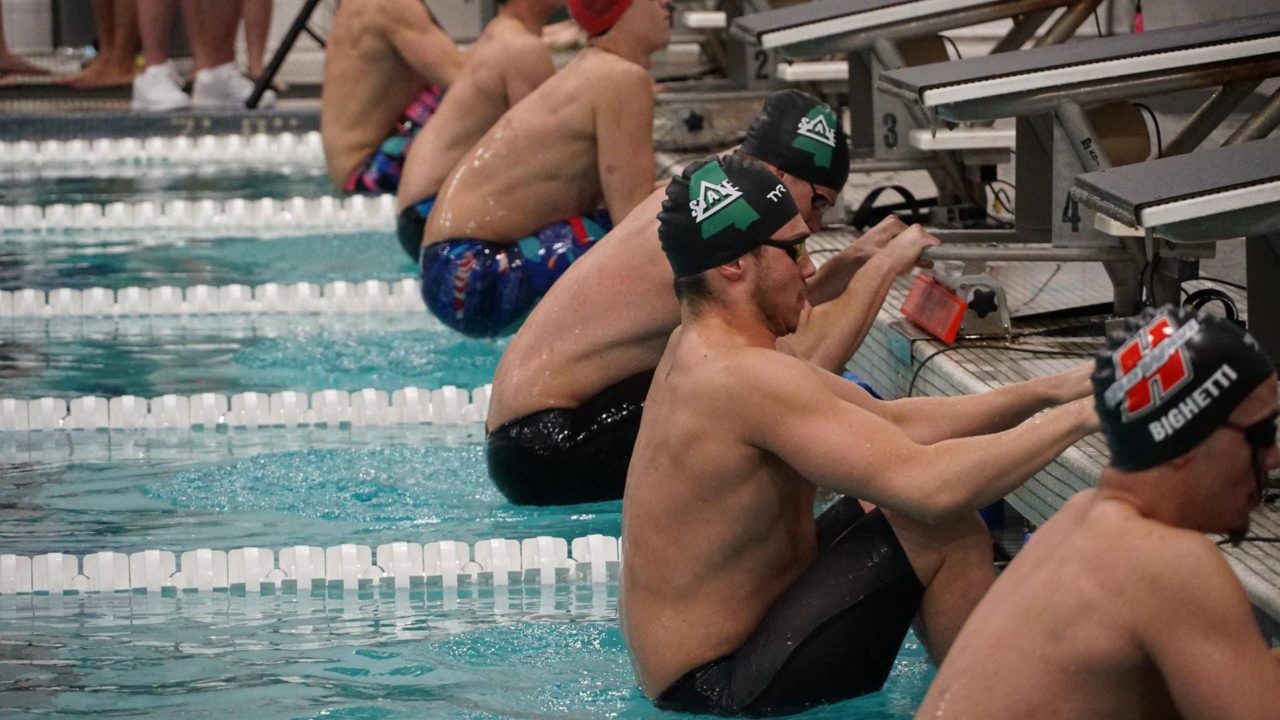 Giulio Brugnoni helped lead the charge for the Statesmen, breaking his own NSISC and pool record in the 100 backstroke (46.23) on Friday. Current photo via Delta State Athletics

Giulio Brugnoni helped lead the charge for the Statesmen, breaking his own NSISC and pool record in the 100 backstroke (46.23) on Friday at the Ronald G. Mayers Aquatic Center.

INSIDE THE LANE LINES

The Statesmen continue with the fourth and final day of the NSISC Championships tomorrow. The prelims begin at 10 a.m., with the finals starting at 4 p.m.

CLEVELAND, Miss. – Both Kelsey DeJesus and Morgan Ayers had first-place finishes to help the Argos build their lead to 101 points over second-place Delta State. After the third night of competition, UWF is in first-place with 907 points. Delta State ended the day with 806 points. The rest of the field remained the same with Ouachita Baptist (286 points), Texas-Permian (253 points), Montevallo (238 points) and Henderson State (215 points) rounding out the field, respectively.

The meet began with the 500 Freestyle and the Argos had two swimmers place in the A-Final: Lauren Jonsson and Caitlin Tierney. Jonsson placed fifth with a finals time of 5:07.78 and Tierney finished right behind her in sixth-place (5:07.99).

In the 100 Yard Breaststroke Ayers, Lisa Cottage-Ramnick, Manon Milczynski, Hannah O’Toole and Stefanie Markwardt placed inside the top 10. Ayers picked up her first individual first-place finish of the NSISC Championships with a finals time of 1:02.06. Cottage-Ramnick came in fourth-place by posting a time of 1:03.98, Milczynski finished in fifth-place by recording a time of 1:05.16. O’Toole placed sixth (1:05.86) and Markwardt came in seventh (1:06.92).

Five Argos also finished in the top seven for the 200 Butterfly: Olivia Hadaway, Katelyn Balent, O’Toole, Gena Mendez and Ardinn Grabenhorst. Hadaway led the group of Argos with a 2:04.78 finish. Balent recorded a time of 2:06.47 placing her third in the race. O’Toole finished in fourth with a finals time of 2:06.86, Mendez posted a time of 2:07.54 earning her fifth-place, and Grabenhorst came in sixth (2:08.04).

UWF took the top two spots in the 1M Dive Championship Final with DeJesus placing first (441.70 points) and Daniela Reyes following right behind her finishing in second (412.35 points). DeJesus won both diving events at the NSISC Championships. Carson Bronnenberg finished fourth in the event by posting a score of 355.85 points.

The Argos ended day three with a second-place finish (7:40.95) in the 800 Free Relay by Tierney, Yael Danieli, Jaworski and Ayers.

The final day of the meet will take place on Saturday, with a prelim session beginning at 10am and finals starting at 4pm in the Ronnie Mayers Aquatics Center. The schedule for Saturday includes the 1,650 Free, 100 Free, 200 Backstroke, 200 Breaststroke, and the 400 Free Relay.