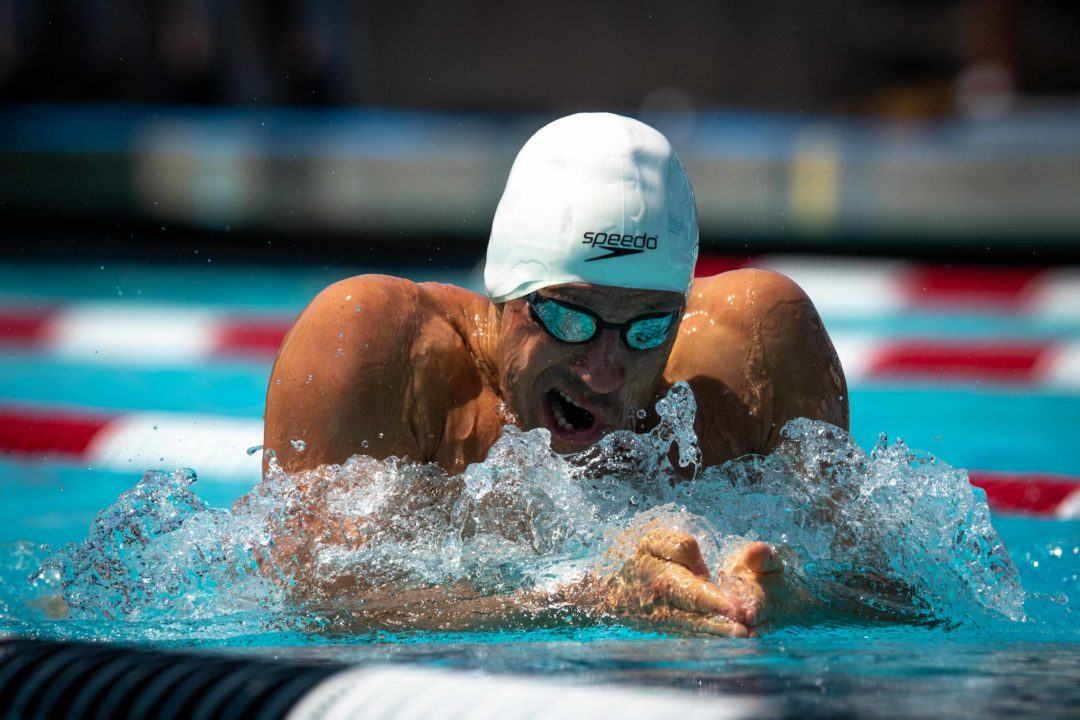 In the midst of his comeback, 30-year-old Brandon Fischer swam a lifetime best of 1:01.06 in the 100m breast. Stock photo via Mike Lewis/Ola Vista Photography

Livermore Cowboys swimmer and University of Wyoming alum Brandon Fischer swam a lifetime best in the 100 breast during prelims at the Clovis PSS at 30 years old. Fischer, a 2016 Trials semi-finalist, is in the midst of his comeback to competition after taking time off post-Trials.

Unlike most swimmers coming out of retirement, Fischer has continued to get faster. After finishing his Wyoming career in 2012, Fischer continued to drop time. Starting from his 2012 personal best of 1:02.40, Fischer has dropped to a 1:01.63 within 2 years. After his decision to return to the sport, Fischer maintained his improvement consistency, going another lifetime best at 2018 Nationals.

Tonight, Fischer has another shot at lowering his 1:01.06 from this morning coming in as the leading prelims time.

Brandon has been through soooo much in his 20 years of training and working full time as an engineer. He has an amazing story even though he’s under the radar. This will be his 4th round of Olympic Trials.

Wow–he dropped like 1.5 seconds in the final for the gold!

Matchup: Gianlucca and Brandon in the 200 breast.

Why is it always breaststrokers?

I practice with him. He practices with our club team and also works full time so he practices whenever he can. He works exceptionally hard while juggling a full time busy job. He’s always a positive attitude on deck and really helps us younger athletes on the team grow and inspires us. He’s been around on the team for a while and is a pleasure to swim with

our feature on him from the LA Invite last summer breaks down his training schedule, as the below commenter alluded to: https://swimswam.com/2016-trials-semifinalist-brandon-fischer-attempting-comeback-at-29-video/

This while working full time at the LNL.