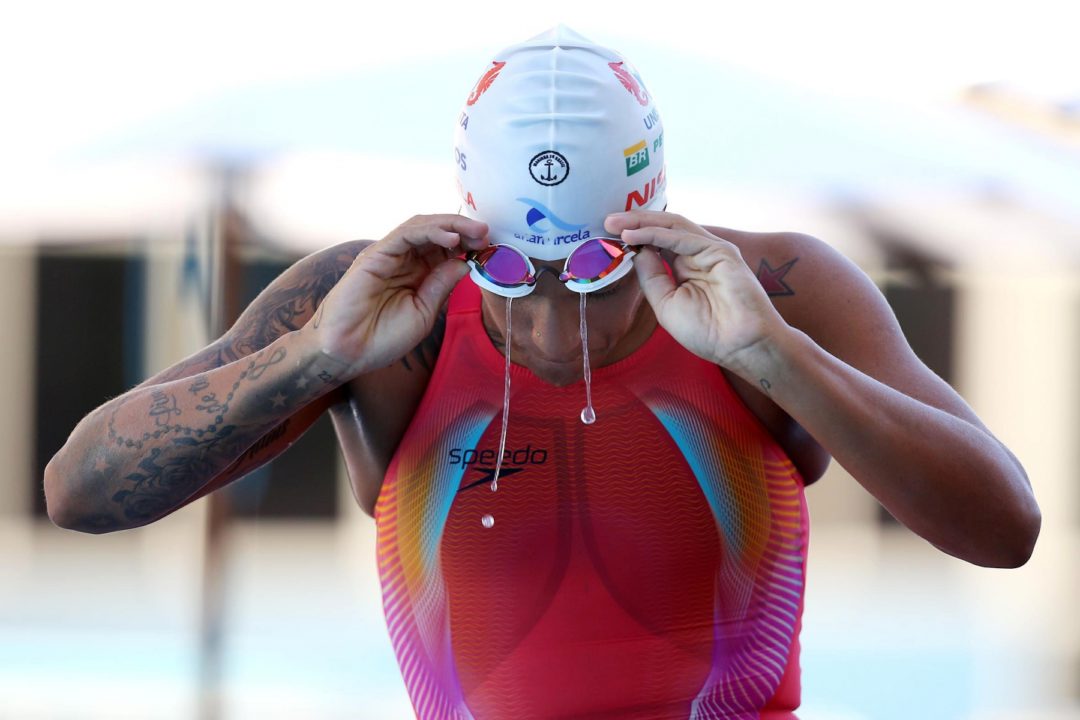 After finishing in bronze in 2017 in this same event, Cunha soared to gold with a time of 57:56.0 in the women's 5K this morning in Gwangju. Archive photo via Matheus Paiva/SSPress/CBDA

Not an Olympic event, the women’s 5K this morning in Gwangju was a race for a World title (and a World title alone). The 10K saw China’s Xin Xin defeat American Haley Anderson by just nine-tenths of a second in the first Olympic qualifying event of these World Championships.

Tonight in the 5K, the race belonged to Brazilian Ana Cunha, who surged in the final two kilometers to touch for gold in 57:56.0. She won bronze in 2017 in this event, which was won by Ashley Twichell (USA) while Frenchwoman Aurelie Muller took silver.

Cunha took it tonight with a 57:56.0, followed by Muller who again took silver at 57:57.0. Third looked to belong to USA’s Hannah Moore, but the photo finish between she and Germany’s Leonie Beck turned out to be a virtual tie at 57:58.0. Moore and Beck would share the bronze.

Italy’s Rachele Bruni, the bronze medalist in the 10K from Sunday, grabbed fifth.

It’s incredible how close these OW races are this week! Every race seems to be a nail biter, and literally only a few seconds between 1st and 10th. 1-2 hour races with placings sometimes only 0.10 apart…. Crazy!

Great job Hannah Moore. Your decision to drop WUGs to focus on this meet was worth it.

SWIM4EVER: “US Distance Swimming is a joke. No medal contenders.”
Hannah Moore: “Hold my beer”

It’s cultural though. How many US club swimmers are spending their summer doing a mix of OW and pool training? Because that’s normal in continental Europe.

Not many, is my guess. Many pool swimmers don’t like open water because they can’t see the bottom of the lake or wherever they are swimming. Not sure the lakes in Europe have amoebas and flesh eating bacteria that we seem to have here in the States.

You wouldn’t really want to take a big inhale through your nose of lake water anywhere in the world if you can help it.