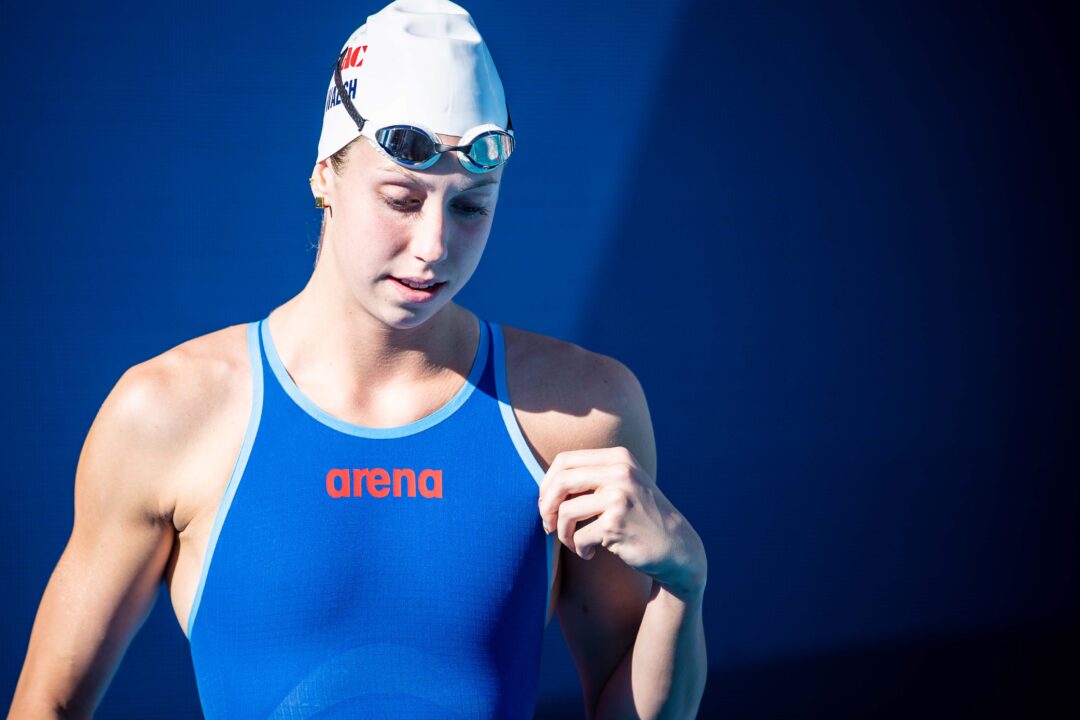 And then there were five.

After our staff counted seventeen different swimmers from top 25 ranked NCAA programs that were undefeated this season in individual NCAA events prior to midseason invites, twelve failed to keep their streak alive, suffering individual losses for the first time this season during their invites.

The five swimmers that were able to remain undefeated throughout their invites include Maggie MacNeil, Leon Marchand, Jasmine Nocentini, Kacper Stokowski, and Gretchen Walsh.

Interestingly enough, none of the five undefeated swimmers raced four individual events at invites – which was allowed at most of them. Marchand, MacNeil, and Walsh were all entered in four events and only swam three, while Nocentini was entered in three events and only swam two. In fact, Stokowski is only on this list because he raced solely in prelims races (for the purposes of this article, we are only counting individual finals races as wins or losses) and technically didn’t lose anything individually.

So, what’s next for the final five? With all three of the undefeated female swimmers being sprint freestylers, it’s very likely that one of them will snap the win streaks of the other two at NCAAs. In addition, there are also many other sprinters like Torri Huske, Claire Curzan, and Kate Douglass who have the potential to snap the streaks of MacNeil, Walsh, and Nocentini.

Meanwhile, the two male swimmers have a better shot at remaining unbeaten. Although Marchand has his fair share of rivals, including Carson Foster and Hugo Gonzalez (who recently announced that he would be coming back to race in the second semester), he’s currently the top ranked swimmer in three different events. With Luca Urlando being out for the season, Stokowski has the fastest 100 back personal best in the NCAA and also has an outside shot in the 200 back (he was around two seconds off the NCAA winning time last year), so there’s potential for him to stay undefeated as well considering that he didn’t swim a third event at NCAAs last year.

It’s important to note that being undefeated isn’t a perfect measure of success in NCAA swimming, as many of the nation’s top swimmers are not undefeated because they had one bad meet or chose to swim “off” events at dual meets. However, to remain unbeaten throughout the course of the season is an extremely rare and impressive accomplishment, and being able to pull it off would be one of the greatest feats in NCAA history.

Who do you think will remain undefeated throughout the course of the 2022-23 NCAA season? Here’s a list of the five undefeated swimmers and all the individual events they’ve won this year:

I think one of GW or MM will be undefeated. Gretchen is looking a little stronger so far this season, but she has a harder path, with Kate Douglass and other strong teammates to compete against at every meet, and then also Berkoff in a dual meet and ACCs. If they are both undefeated going into NCAAs I’d probably go with GW, but MM has better odds at this point.

Of course if any one of Douglass, Curzan, or Huske is on terrific form at NCAAs, no woman will be undefeated this season.

If you finish 4th in prelims and scratch finals, does that count as undefeated?

Clearly specified by the author: “for the purposes of this article, we are only counting individual finals races as wins or losses”

Marchand’s path looks tough, but he was a step ahead of Gonzalez and Foster last year, so that feels a lot more likely.

Gonzalez beat him last year in the 400 IM.

Gonzales won the 400IM Marchand was second at the NCAAs; At the worlds in Budapest Marchan was first in the 400 IM with the second fastest time ever, coming within 1/2 second of Michael Phelps 2009 World Record. So it will be close.