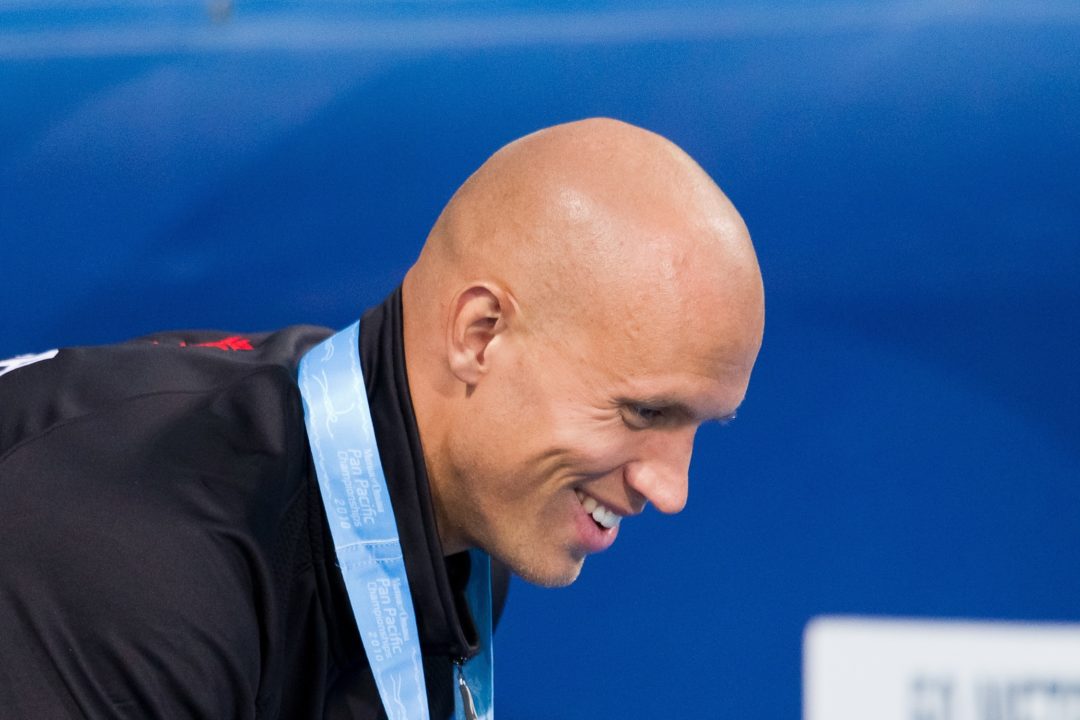 The 36-year old Hayden swam the 4th-fastest time of his career on Saturday in his 3rd meet back from a nearly 8-year hiatus from the sport. Archive photo via Tim Binning/TheSwimPictures.com

36-year old Canadian swimmer Brent Hayden hit his Olympic “A” time on Saturday in the 50 free, swimming a 21.97 to finish 3rd on Saturday at the Pro Swim Series meet in Des Moines.

On Saturday, Hayden blew the doors open and slid under the Olympic “A” time of 22.01.

The time does not officially select Hayden for the Olympic Team. Unlike some countries, Canadian swimmers must hit the Olympic Qualifying Time and finish in the top 2 at the Canadian Olympic Trials to guarantee a spot on the Olympic Team. If nobody hits the “A” standard at the Canadian Swimming Trials in April, the top ranked swimmer who hits the Swimming Canada Olympic Nomination Time of 22.12 will earn an invite. Beyond that, the Swimming Canada High Performance Director has sole discretion to add swimmers who have FINA ‘A’ times where places are still available.

Hayden’s time is the best by a Canadian this year or last, ahead of Yuri Kisil’s 22.23 from the 2019 Canadian Olympic Trials. William Pisani was 22.30 at that meet, and both swimmers are over a decade younger than Hayden.

The older the better

Youre right. I think the idea of athletes having “prime” years is a bunch of bs. If athletes and coaches learn how to adapt their training and diets to match their age, the so called prime years can happen over and over

Incredibly impressive to not only be within spitting distance of best times at age 36, but after 7+ years of retirement! As a Canadian fan, there’s a massive appreciation there for Hayden being one of the few guys that kept Canadian swimming afloat in the 2000s. Having him back in the sport is so exciting, and there’s such an insane level of talent there to be able to move down from the 100 to the 50 and still be performing at this level.

Thanks so much! That really means a lot. Just hoping my presence back can have a positive impact on this younger team.

And Brent himself leads the comment section… Awesome!! But not as awesome as being 2 tenths off his lifetime best… From 11 yrs ago… In a supersuit… In season… After 7 yrs of retirement… Etc… Etc… Etc …

That’s the real huge thing. Surely both of those times from 2009 were super-suited. Absolutely amazing. If you want to hear some of things Mr. Hayden is doing diet-wise, check out the “Inside with Brett Hawke” podcast they just did. It seems like he’s hitting all the right things in the pool, into the body and inside the mind. Can’t wait to watch him in Scarborough in a month, then Tokyo this summer.

Glad you enjoyed the podcast!

11 years…in a super suit…thanks for reminding me how old I am! Haha!

Age is just a letter

Now just need to find some old man speed off the blocks!

Love to see you interact with the other swimmers once the race is over!

That’s one of the things I missed the most when I retired.
PS – I legit had to ask Dressel what my time was because I couldn’t read the board without my glasses.

That is hilarious. Congrats.

You must have picked up your dive from Ryan Cochrane

All the best this summer on your road to Tokyo!

Don’t underestimate Hayden. He was the fastest *swimmer* in the water tonight. He got off the blocks like an elderly man getting out of bed and at 15m was like a body length behind Dressel, but then was only .46 behind him at the finish. 21.97…not bad for 8 years away from the sport. VERY reminiscent of Ervin’s story, even down to the start. Happy to see Caeleb giving the veteran respect at the end!

That is the best description of my dive I’ve ever read! Hahaha!!! Yeah I’ve always had slow dives for a sprinter…and believe it or not.. this is actually better than before. Got some ideas of what I can work on. Overall happy with the time and had a lot of fun racing those guys! Glad to be back!

Haha yeah honestly I’ve never seen ANYONE come back on Dressel in such a short distance. In fact, in ANY distance (with the lone exception of Chalmers in the 100FR). It’s a bold statement, but your raw freestyle speed might very well be the best in the world at the moment, which is quite something given your comeback circumstances. With some more training heading into the summer, good rest, and even a marginally better start, your wicked acceleration/momentum could take you further than anyone might suspect! You’re making waves Brent (literally and figuratively)

You add a second for daylight saving time.