6 Storylines To Watch In the ISL’s 2020 Season Final 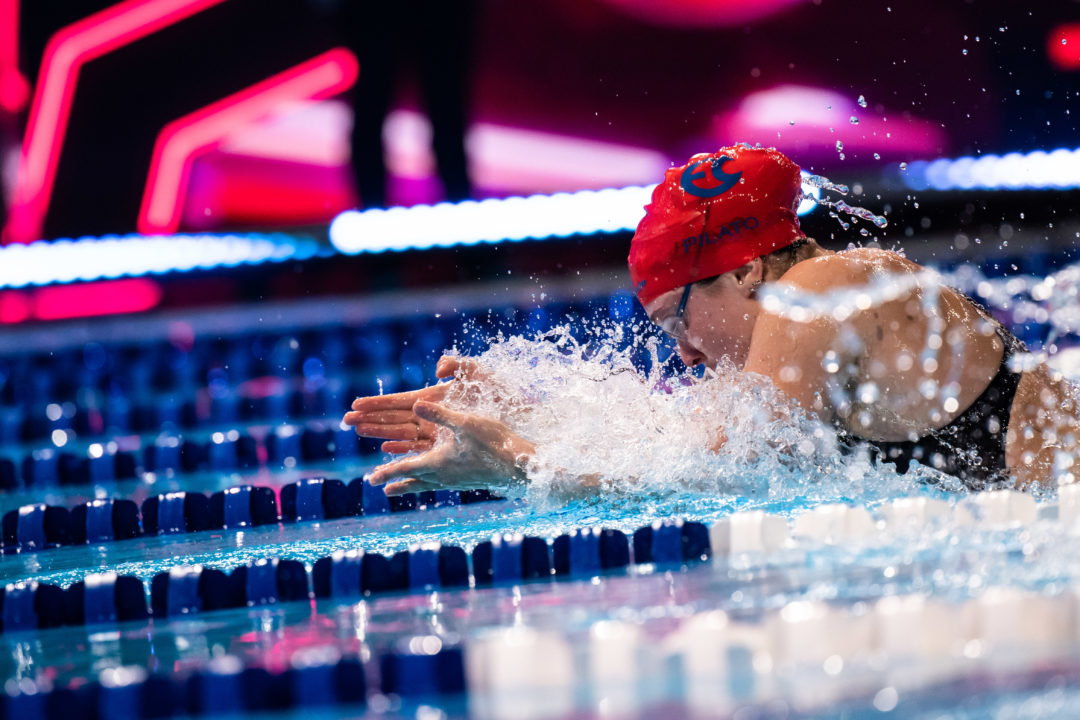 Co-ISL leaders Lilly King and Benedetta Pilato will do battle with each other and world record-holder Alia Atkinson in the 50 breaststroke. Archive photo via Mike Lewis/Ola Vista Photography

The outcome of the whole meet might turn on the women’s medley relay to close day 1.

Cali has never lost this relay, a streak of 9 straight wins stretching back to last season. But over the regular-season finale and the semifinal rounds, both Energy Standard and London put up far better times than Cali. Energy Standard broke the ISL record and leads Cali by about 1.6 seconds in the ranks.

The winner of this relay gets to pick the skins stroke for day 2, so the impact of this relay could very well flip the meet for any of the top three teams. Here’s a quick comparison of each team’s season-best, but also a composite time made from individual season-best relay splits from the four likely legs – these splits do factor in relay exchanges, except when a swimmer has been faster without a relay exchange. Those cases are noted with an asterisk (*) and suggest a team could have room to improve on that split:

2. The Backstroke Battle We’ve All Been Waiting For

Last week, we highlighted the men’s backstroke battle in semifinal #1. But it actually gets even better this week.

The top 4 swimmers in the league this year will go head to head in the 50 back – that’s Ryan Murphy, Christian Diener, Coleman Stewart and Guilherme Guido. Meanwhile the meet will feature 4 of the top 5 swimmers in the 100 back (Kliment Kolesnikov, Guido, Murphy and Stewart) and 200 back (Murphy, Radoslaw Kawecki, Evgeny Rylov and Kolesnikov).

Every team should have a threat to win at least one of the three backstroke races. Energy Standard has ISL record-holder Kolesnikov in the 100 back, and he could also be a wild card in the 50 after not swimming it yet this year. LA’s Murphy is the league leader in the 50 and 200 backs. Cali’s Kawecki has been one of the few swimmers to beat Murphy in a 200 back this year, and Stewart pushed Murphy to the third round of the 50 back skins last week. And London’s Guido is the ISL record-holder in the 50 back with Diener ranked #2 in the league this year.

There’s also a decent chance we see the backstroke skins on the men’s side, too. Murphy has won 4 backstroke skins and Diener 1, while Guido, Stewart and Dylan Carter have all been in skins finals.

Caeleb Dressel set a world record for the Cali Condors last week. But if things break right this week, he could legitimately challenge five world records.

There’s the 100 IM, where Dressel went 49.88 to take almost half a second off the world record.

There’s the 50 free, where Dressel set the world record at 20.24 in last season’s final and was just .04 off that mark last week.

There’s the 100 free, where Dressel broke his own ISL record last week and sits just three tenths off the world record.

There’s the 50 fly, where Dressel hit a career-best last week and is only three tenths off the world record.

And there’s the 100 fly, which will be Dressel’s first swim of the meet and where he’s about nine tenths off the world record with his swim from last week.

In the five meets since then, though, Pilato had gotten steadily faster, culminating in a 28.86 last week to tie King’s league record and set the two in a tie for the fastest time in the league. King, meanwhile, has taken on a brutal event schedule on a weekly basis, winning four ISL skin races, but also taking her first career losses in the 50 breast and 200 breast.

King and Pilato get their much-awaited rematch in the final this week, with the 50 and 100 breast titles up for grabs, plus key legs on the medley relay (where the two have identical 1:03.03 season-best splits) and a potential skin race rematch.

The wild card behind them is London’s Alia Atkinson, who is the world record-holder in the 50 breast and who broke King’s 100 breast league record last week.

5. How Do Toussaint & Peaty Follow Up Semifinal World Records?

London set two world records last week – now we get to see just how much more they have in the tank after swimming lights out as a team in the semifinals.

Kira Toussaint broke the world record in the 50 back at 25.60. But she now gets to face Cali’s Olivia Smoliga, herself only about two tenths off the world record. The two have had a back-and-forth rivalry all season long.

Adam Peaty set the world 100 breast record last week in a banner meet. It’s his good fortune that he doesn’t have to face rookie of the year Emre Sakci, whose Iron team was eliminated last week. But Peaty will still face Energy’s Ilya Shymanovich, who is one spot behind him in league ranks in both the 50 and 100 breast.

Energy Standard’s Sarah Sjostrom was a dominator in those events last year, but has been dealing with ongoing back pain this year. And Energy’s immense butterfly depth means she could actually sit out the fly, where her team has three of the league’s top 5 performers with Anastasiya Shkurdai (#3) and Maddy Banic (#5).

In the 100 free, Energy also has league leader Siobhan Haughey, who is just a tenth off the league record.

LA will put up arguably their best swimmer, Beryl Gastaldello, in both races. She leads the league with a league-record 55.32 in the 100 fly, and sits #2 in the 100 free. Her teammate Abbey Weitzeil is among the rookie contenders in the 100 free.

London is very strong in the freestyle, with Freya Anderson consistently throwing down 50-point splits on relays. She’s the #5 swimmer in the league this year in the 100 free.

And Cali is strong in the 100 fly, with Kelsi Dahlia sitting #4 in the league as the former league record-holder.

i think Pilato is already the best 50 m long course sprinter (her turn isn’t that great, yet). Lily King will win this short course “battle” though

That’s one way of interpreting what happened I guess.

The only one so far who could live with Murphy’s endurance in the backstroke skins was Irie, who came within a few hundredths of Murphy on the third 50. Even if Irie were racing in the final, he likely would not have the raw speed to get through the first round.

Kolesnikov seems the most likely to be able to challenge Muprhy in backstroke skins. ENS keeping their cards close to their chest though — we haven’t even seen Kolesnikov swim a 50 yet, but his back halves in the 100 back have been scarily fast.

If dahlia hits the taper right and splits 55.0-54.6ish and everyone else is right on their best or faster it’ll be very interesting

She didn’t at worlds last summer, hopefully she redeems herself in SCM.