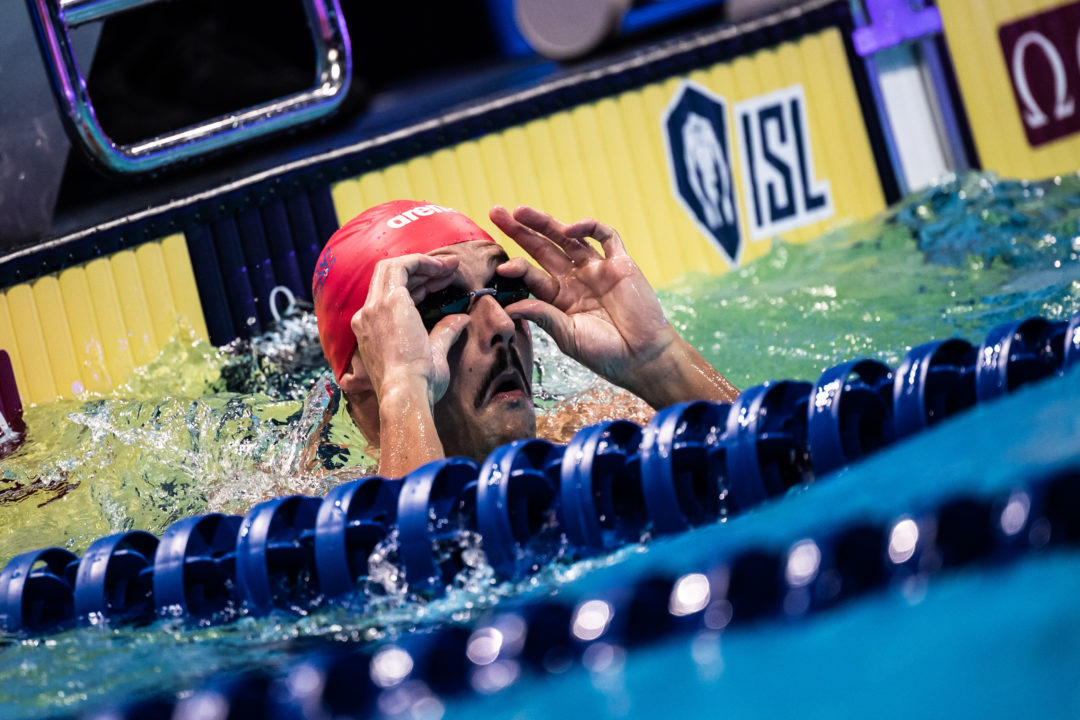 We compiled season-best times from each of the four teams in the ISL final to create a makeshift 'psych sheet,' plus applied our XBox team ratings system. Archive photo via Mike Lewis/Ola Vista Photography

Thanks to SwimSwam’s Barry Revzin for compiling the psych sheets and doing all the math for our ‘Xbox’ team ratings.

The International Swimming League final is this weekend. And to make it feel more like a traditional championship swim meet, SwimSwam has compiled season-best times from all four teams to create a meet ‘psych sheet’ of sorts.

You can see our full compiled ‘psych sheets’ for the final here.

These psych sheets don’t include the skin races, as the strokes for those races won’t be determined until we know the medley relay winners on day 1. For a more detailed analysis of the skin races in all four strokes, check out this post from earlier today.

Early in the season, Barry ran a rough approximation of Xbox Live ratings on ISL teams, aiming for an Elo-based rating system of ISL franchises.

You can see that post from last month here. Calculated after just the third of twelve ISL matches so far this year, that ratings system did put the four eventual finalist teams in the top four, and also accurately ranked the bottom two teams eliminated after the regular season.

That pretty much exactly mirrors our final edition Power Rankings – which, to be fair, take a lot of Barry’s statistical analysis into account. The only difference is that the XBox ratings put the DC Trident last, while our Power Rankings had them 9th and the Aqua Centurions 10th.

Looking at the “psych sheet” it really highlights how much of a shame it is that Margalis had to leave before the post-season could be concluded. Would of made for some even closer, and fun, IM and 400 free races.

and we don’t still know why she left

That’s probably because it’s none of our business.

Looking at the jackpot lines, it looks like there will be a lot fewer jackpots in the finale than there were in regular season meets. Now that we’re almost through the season, it seems the jackpots ensured the top four teams they would make the semifinals, allowing them to experiment more with their lineups and to rest swimmers. It’s still the rich getting richer, but the final likely won’t be driven by jackpots the way the regular season meets were.

Even without the jackpots the top 4 right now would be the top 4 without jackpots. However cali wouldn’t be undefeated I think

Cali have defniitely benefited the most from the jackpots and a projection of the final based on semis times without skins has Cali first but dropping to third without jackpots.

Even without jackpots, Cali would still be undefeated. We’ve been following this one closely, and actually jackpots would’ve have affected the standings in any meet so far… surprisingly to us.

big jackpot in the 100 IM with Dressel Ciezlack, 37 pts again and zero for the other team. The first semi-final was slow, 51 high for Orsi who is not here.

Interested to see how this plays out. I imagine jackpots will probably be less effective i since everyone will be on a full taper. That is unless someone has a swim beyond what we expected. Skins will be extremely important. It’s also interesting how everyone team has some decent options for most skins choices so maybe we will see a team that picked the skins actually lose the skins.

Like maybe if ens men pick the skins, they go with backstroke to avoid dressel and go with kolesnikov/rylov and then Murphy or carter wins it. Same if they pick breaststroke and go with lima/shymanovich and lose to peaty

I’d expect Energy to pick Breaststroke for men. Shymanovich has a good shot of beating Peaty there and definitely of advancing regardless, and Cali is unlikely to score a lot. In the semifinal this past weekend, we had Peaty (35) and Prigoda (12) to Shymanovich (21) and Lima (11). But Cali isn’t going to make it to the second round, so while Energy could lose 15 to London (and they could do better than this) they’d probably gain 20 on Cali, so it seems like their best bet. Of course, Dressel might go 25.5 in the Finals because he’s Dressel so who knows.

Backstroke they might not make it past the first round, they haven’t had anybody break 23… Read more »

I think free is the worst option. Dressel would score 21 point in the finale round of the free skins against anybody in this field. And he would absolutely stole some points in first two rounds. He alone could score 45-50 points for Cali. There is no chance they would go for free.

I think the probability of them choosing back is larger than what you expected. At least it isn’t more unlikely than fly and free.

Kolesnikov is kind of unknown. I think he didn’t swim 50 back this season except in the first match, where he was not in form at all. He improved quite a lot through the season, so maybe he has a pretty good 50 in him right now considering he’s the LCM wr holder.

Losing to London in skins is as bad for… Read more »

Choosing back would be risky imaging only Guido dinner Murphy and Stewart going into top 4?

It’d be a big surprise if Kolesnikov misses top 4. He has 4 of the top 5 times in the 100 so far this season including the top 3 and is WR holder in long course 50. ENS just doesn’t put him in the 50 to save him for the medley relay which is more important.

He also was the former WR holder in the 100 SC back too a few years ago. The kid has speed!