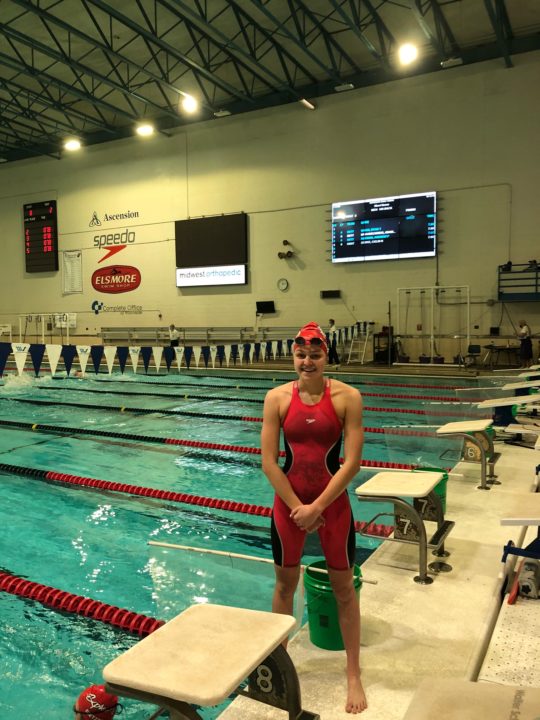 In the wake of last week’s high school state championship meet, a group of Southeastern Wisconsin club teams got together on Thursday for a quick long course time trial event.

The results included a first Olympic Trials cut for 16-year old Faith Johnson of Rocket Aquatics in the women’s 100 backstroke. She swam 1:02.26, which cleared the established standard of 1:02.69 to qualify for next summer’s Olympic Trials. Her previous best time was 1:03.11.

Editor’s note: not to be confused with the former University of Tennessee standout of the same name.

Johnson now ranks as the 64th-fastest American in the 100 meter back in history, jumping one spot ahead of legendary high school swimmer Dagny Knutson and famous Wisconsinite Beata Nelson, who went on to become the fastest woman ever in the 100 yard backstroke and who won the 2019 NCAA title in that event.

When the coronavirus pandemic postponed the Olympic Games, and US Olympic Trials, from the summer of 2020 to the summer of 2021, USA Swimming decided to leave the existing standards intact at least through the end of 2020. While there were some concerns that this would lead the meet to be larger than USA Swimming wanted, so far there have only been a handful of new qualifiers – which have been partially offset by swimmers opting to retire instead of hang around for next year’s Trials.

Also at that meet were sisters Maggie Wanezek and Abby Wanezek of the Elmbrook Swim Club. The 15-year old Maggie won the 100 back in 1:01.22, which shaved a couple of tenths off her previous best time – though she was already qualified for the Olympic Trials in this event. She’s now the 22nd-best 15-16 in the history of the event, in spite of being at the younger end of the age group.

Abby later won the 50 free in 26.46, which is a new lifetime best for her. Maggie was 2nd in that race in 26.59. The two finished in the same order at the Wisconsin Division I State Championship meet last weekend.

Other Highlight Performances At the Meet: