21 Swimmers Add NCAA ‘A’ Cuts During Final Weekend Of Invites 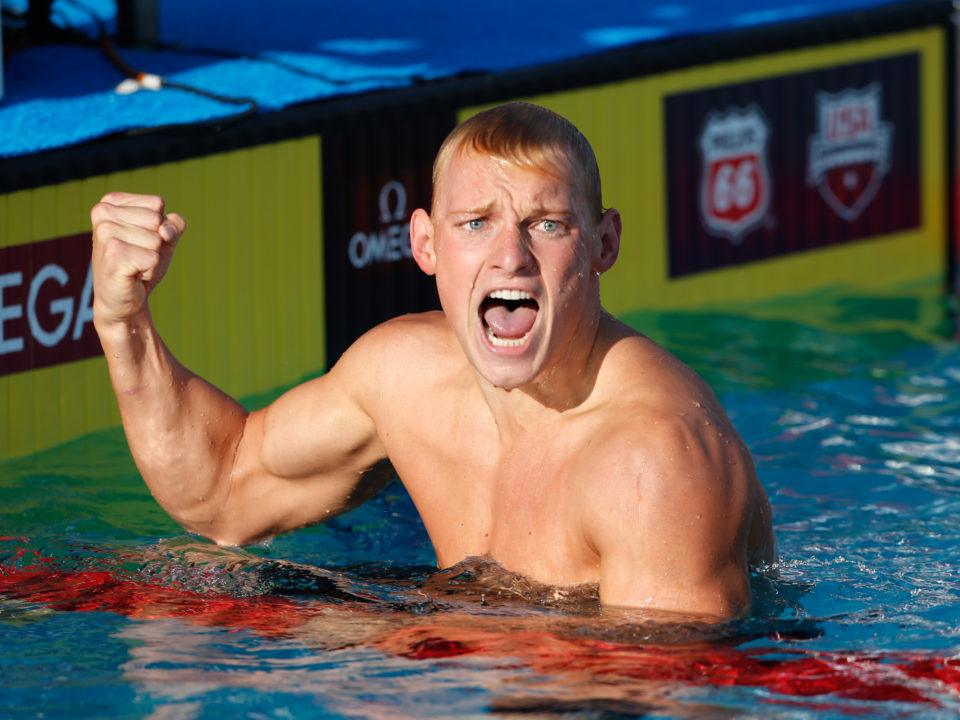 Andrew Seliskar hit an NCAA 'A' cut in three different events over the weekend. Archive photo via Tim Binning/TheSwimPictures.com

After a week off for Thanksgiving, the last round of mid-season NCAA invite meets took place over the weekend and there were a lot of fast times put up. As the last real opportunity to score an NCAA qualifying swim before the end of 2018, a swimmer locking up a qualifying time now meant they could go into their Conference Championship with less rest and less pressure and thus allowing them to put their primary focus on peaking for NCAAs.

In total, nine women and twelve men hit NCAA ‘A’ cuts for the first time this season over the weekend, bringing the cumulative total to 25 women, 17 men and 42 total swimmers. Check out the full list below (the swimmers in bold are new qualifiers from this weekend):

In addition to all of the new qualifiers, Beata Nelson and Louise Hansson both achieved new cuts, with Nelson adding the 200 back, 100 fly and 200 IM to the 100 back time she already had (she also broke the American Record in that event this weekend), and Hansson added the 200 fly and 200 free after already having the 100 fly. Nelson now leads all swimmers with four ‘A’ cuts, while Hansson, Sydney Pickrem, Mallory Comerford, Ella Eastin, Erika Brown and Andrew Seliskar all have three.

Seliskar’s three are obviously the most amongst the men, while Texas sprinter Tate Jackson, Michigan distance freestyler Ricardo Vargas Jacobo, and freshman breaststrokers Reece Whitley (Cal) and Charlie Scheinfeld (Texas) are the only others with multiple cuts at two (all doing so this weekend).

Additionally, after the first round of invites we had found that a total of 98 women and 41 men had achieved at least one time that would’ve qualified them for the 2018 NCAA Championships. This past weekend that number grew by over 100, as there are now 141 women and 100 men with a time.

Stanford leads with the way with ten female swimmers under a 2018 invited time, followed by Texas and NC State with nine, and then Indiana, Michigan, USC, Tennessee and Texas A&M all have eight. Louisville and Cal both have seven. Look at the full numbers by team below:

Check out the full rankings of all swimmers under the invite time below:

On the men’s side, Texas leads the way with 14 swimmers under, followed by Cal with 13. Michigan is next with nine, and then Indiana and Stanford both have six. Check out the full number of swimmers by team below:

Check out the full men’s rankings below:

On your list NC STATE women have 9 under last year’s cut. So I guess they’d be tied with Texas for 2nd most?

Correct, I miscounted them. Updated now. Thanks!

Would be cool to see a “prediction” of what it will take to obtain an invitation to the 2019 NCAA meet… Given the data we have already, as well as historic information, this “prediction” wouldn’t be too far from actual.

I dont think USC is trending up. Stanford swam like they were tired. Florida did okay they are steady. Virginia men I agree we didnt see much.

How about this analysis? swimmers likely to A final in two or more events:

Hoffer A finaled in 50 free/100 fly last year, so I would say definitely in

okay then move him over but I dont think that Jensen, Sendyk AND Hoffer can all A final the 50/100 free. Maybe move Jensen down I only thought he could do it cause his summer swims were very strong but they dont always convert to SCY.

Did he make a sanctioned time? He had some fast swims at inter squad meet a few months back but those don’t count. He can definately score in the 200 and has potential in the 50 and 100.

Like Sam Stewart, he’s gotta make the cut AND perform and NCAA’s. Both those guys may have to taper for Big 12’s and then hope to hold it. Krueger was apparently sick last week

2
0
Reply
JP input is too short
Reply to  Longhorn

A Final in 2? No, I think that’s a bit aggressive. Which of these guys do you think he’s going to beat out in the 100 – Ress, Molacek, Haas, Jackson, Apple, Howard, Becker, Jensen, Hoffer, Rooney, Samy, Blaskovic? He’s very good but it is *hard* to A final in the sprints as a freshman.

Lots more good swimmers still to qualify from all teams and be in the mix, btw, not trying to say that Texas and Cal are all that matters nor that the numbers in the table are guarantees for the meet.

It was a good first crack at it but we need diving and relays added in. There are too many holes in the times posted to really be meaningful. Some guys are likely to just repeat their swims in March but there will be 5 to 10 other guys swimming faster then so they will be lucky to score. We can’t even be sure who will swim faster and who will just be about the same. So in my opinion Texas still wins because of diving I think thats the likely outcome. Does anyone think Texas will win the swim portion outright? I guess its really close.

I respect the heck out of the divers from all teams but yes, I do believe that this year Texas will be top scoring team in swimming alone. Very special team this year.

the results from this past weekend showed me that Texas is now the favorite. Scheinfeld was huge, can’t be understated. Also a huge swim from Yeager. And solid swims from the other freshmen and Harty. And Krueger didn’t swim. Where was he?

Apparently he was sick. I don’t have inside info, just the rumor

His latest Instagram post indicates that there’s something going on with his health. We don’t have any more info either.

Krueger went a 48 high this summer. It looks like he will be a mystery swimmer until conference. He could score in the 100 but I dont see him being a big contributor. Koustik can definitely score in the 200 fly, I dont think he can score in anything else. Scheinfeld was like finding a pot of gold.

Texas had 5 freshman below an invite time from last season and the group doesn’t include Krueger.

Yeah, and I’m not sure Texas put their best relay together for anything but the 400 FR – and even that one is subject to change based on where Krueger is healthwise. Katz was 46.5 back and 1:35 free splits which are sub-Texas standard, I would think Bowman would not be on their best 200 FR and 200 MR, Shebat was slower in the 50 back split than he was out to the feet in his also sub-par 46.0 individual 100 back. And we of course know that Townley will not put out the stinker he did in anything longer than a 100…

Totally agree. Texas will be much improved on the 400 medley relay and that alone could make the relays a dead heat. Texas probably finishes above Cal in 800, I would give Texas the slightest of edges in the free relays and cal the edge in the medleys although Texas has closed that gap.

Texas was 4/2 last year on diving.

Counted Cal at 16/8 but Seliskar was up four times, so really 15/8. Who esle from Cal is reasonably expected to qualify and score ?

Indiana will also be there in the mix.

Going to be a fantastic meet.

From Cal, there are lots of key players: Mefford, Jensen, Sendyk, Carr, Whitley, Julian, Mike Thomas, you get the point