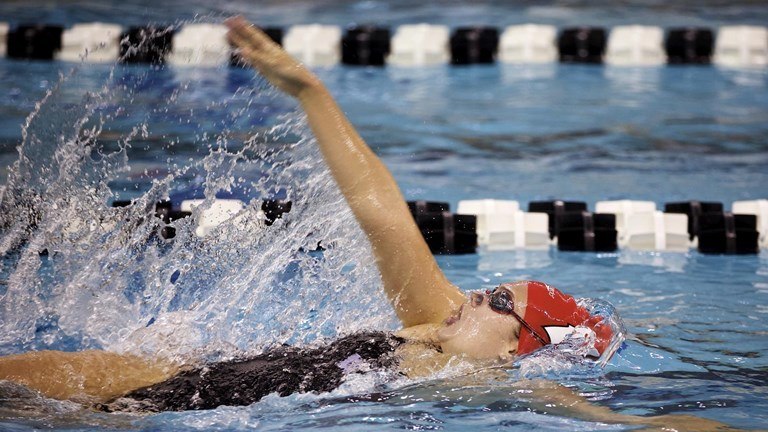 Beata Nelson smashed the all-time record in the women's 100 yard back in a time of 49.67. Archive photo via Wisconsin Athletics / Deb Lindsey

Beata Nelson of the Wisconsin Badgers broke the American, NCAA and U.S. Open Records in the women’s 100 back at day 3 finals of the Texas Invite, clocking a time of 49.67 to lower the previous mark of 49.69 set by Stanford’s Ally Howe at the 2017 Pac-12s.

Nelson has had a red hot start to the year, including posting the #1 time in the nation in this event three weeks ago at the ACC vs B1G Challenge in 50.86, and further lowered it in this morning’s prelims down to 50.50. However, her swim tonight toppled past that by a full eight-tenths, improving on her previous best of 49.78 from the 2018 Big Ten Championships. That swim previously ranked 3rd all-time, as Howe also swam a 49.70 last season at NCAAs.

The 50-second barrier has now been cracked ten times in history, with Nelson doing so four times. In addition to her 49.78 at Big Tens, she also went 49.83 and 49.92 at NCAAs last season, where she placed 2nd to Howe in the final.

Nelson is currently in her first season under the tutelage of Yuri Suguiyama, who was announced as Wisconsin’s head coach back in April after previously serving as an assistant with Cal.

My sister goes there!!

… gonna be hard to BEATa Nelson in March 😏

You forgot to mention she has a new coach this year. Evidently its working out for her

Disagree. A .03 improvement and all of the sudden her new coach is the reason for her AR? How about Whitney who got her to essentially the same level but started with her going 52/53’s?

In November, his assistance/guidance has it happening here early on. You can hear and see in interviews with Wisco kids, things are different there.