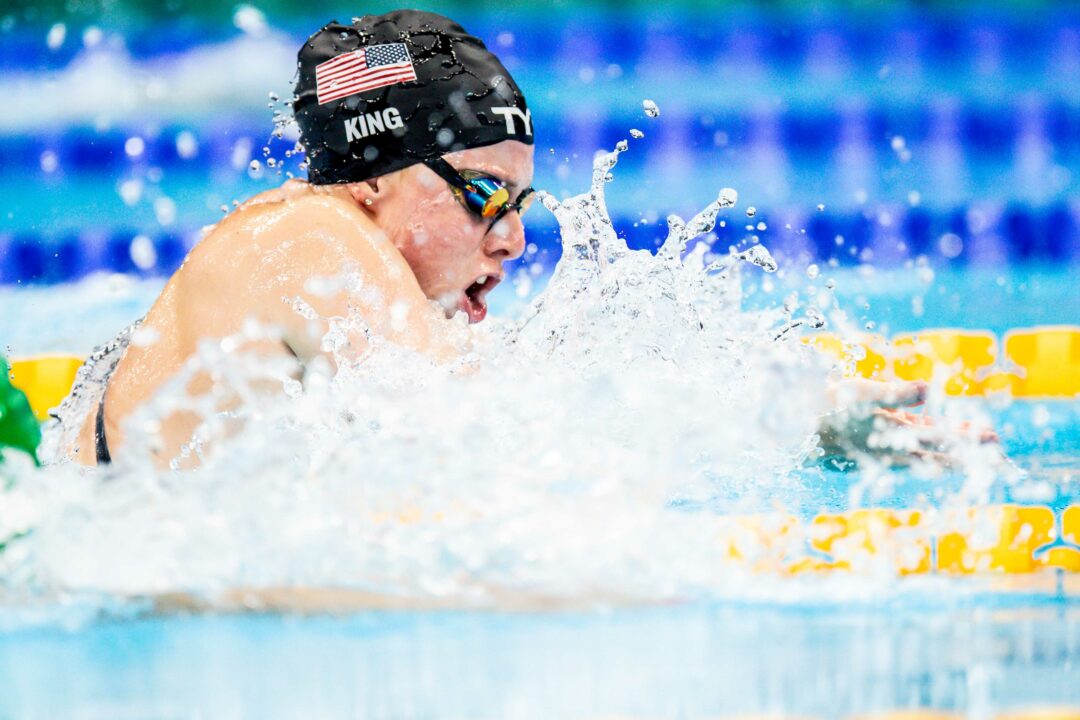 Lilly King will play a crucial role for the American women as they aim to take down Australia in the 400 medley relay after falling shy at the Olympics. Archive photo via Jack Spitser/Spitser Photography

The women’s 400 medley relay has historically been a seesaw battle between the United States and Australia, with the Americans usually getting the upper hand. China has also picked up a few championship victories over the last two decades, but in recent memory, it’s been all U.S., until last year.

The Aussies came through with an upset victory to win the Olympic title in a nail-biter over the Americans, with the two teams mirroring each other’s splits over the first three legs until Cate Campbell overcame Abbey Weitzeil for gold by 13 one-hundredths of a second.

Of the eight swimmers that suited up for those two nations in the Olympic final, only three will be racing in Budapest. Campbell and Weitzeil both won’t be there, nor will either breaststroker or Australia’s butterflier, Emma McKeon.

Given how close the two were last year, it begs the question: which country has the upper hand in terms of the “additions” who will take over in the last event of the World Championships in just over one week’s time?

The most significant loss to either team comes on Australia’s fly leg, where McKeon was an individual medalist in Tokyo and they now lose around a second and a half by turning to Brianna Throssell.

The Americans maintain Torri Huske on fly, unless they go with Claire Curzan, who was a close second to Huske in both the 100 free and 100 fly at U.S. Trials. Either way, the U.S. should pick up at least a second on the third leg after losing ground in Tokyo.

Breaststroke has always been a weak spot for Australia on this relay, and last year’s relay finalist, Chelsea Hodges, fell to third in the women’s 100 breast at Aussie Trials with Jenna Strauch claiming the win in 1:06.49. That’s almost a second slower than Hodges was on the Olympic relay (1:05.57), but given she was 1:06.6 individually in Tokyo, Australia won’t lose much there if Strauch can have a strong relay swim.

The U.S. has Lilly King on breast, who fell to Lydia Jacoby in the individual event last summer and thus her spot in the relay final. King should, at worst, hold firm with Jacoby’s 1:05.0 split from last year.

Freestyle swimming in Australia is so deep that they lost 75 percent of their world record-breaking 400 free relay from Tokyo and haven’t missed a beat. Mollie O’Callaghan (52.49) and Shayna Jack (52.60) lead the world rankings in the 100 free to give the Aussies an edge over either Huske (53.35) or Curzan (53.58).

Then we come to backstroke, where, for all intents and purposes, the two teams are deadlocked with Kaylee McKeown and Regan Smith.  McKeown won the Olympic gold in the 100 back, Smith has been faster this year, and they were both 58.0 on the relay lead-off in Tokyo.

The overall advantage clearly goes to the Americans, and the Aussies would need to pull out something big, and hope one of the U.S. swimmers falters, to have a chance.

The Canadians have been a steady presence in this event of late, and among the nations competing in Budapest (AKA removing Russia from the mix), they’ve been third-best at the last two World Championships and the 2021 Olympic Games.

The one thing that’s always stood in Canada’s way from truly contending for gold? Breaststroke. And that won’t change this year.

Of course it doesn’t work like that, but we can’t emphasize enough how strong the team is on three legs and then equally as weak on the other.

That puts them at a distinct disadvantage against the U.S. and Australia, and they may need Masse, MacNeil and Oleksiak to be on point if they want to stay on the podium with China lurking.

The Chinese quartet comes with the caveat that their “season-best” times were set in September at the Chinese National Games, which we can assume they were peaking for. Nonetheless, China has a very strong team.

They were fourth in Tokyo, a second and a half back of Canada, but an improved breaststroke from Yu Jingyao makes them a medal threat. Based on season-bests, China is up by over two seconds on Canada, the majority of which comes from breaststroke. They’re actually slightly outpacing Australia as well.

We can confidently predict that Masse, MacNeil and Oleksiak will all be faster than their season-bests in Budapest, but for China, we can only say the same about Zhang Yufei (55.39 split in Tokyo) and Yang Junxuan (53.02 flat start at the Olympics).

Canada will also have Pickrem (1:06.4 relay split), Kelsey Wog (1:06.4 flat start) and Rachel Nicol (1:06.6 flat start) in Budapest, so they’ll have some options if one of them is lighting it up in their other events.

The Swedes are the most prominent team we haven’t touched on yet, as they finished fifth, .14 back of China, in Tokyo.

Led by sprinting superstar Sarah Sjostrom, Sweden boasts a strong team that’s complemented by sisters Sophie and Louise Hansson. The fourth member of that Olympic relay, Michelle Coleman, won’t race in Budapest, however, leaving a hole to be filled.

Last year Coleman took on backstroke, while L. Hansson swam fly and Sjostrom was on free. While Hansson has made big strides on backstroke of late, the most likely occurrence is that we’ll see Hanna Rosvall slide into Coleman’s lead-off spot. Rosvall set a 100 back PB of 1:00.81 in April, about a second slower than Coleman was in the Olympic relay.

An add-up of that foursome puts Sweden into a tier below China and Canada, coming in at 3:57.35.

The other Olympic finalists from last summer were Italy, Japan and Russia. However, we know the Russians won’t be in attendance, and Japan hasn’t entered this event.

Great Britain should also factor into the final, though it should be mentioned that Molly Renshaw didn’t race at British Trials and was 1:06.2 in the 100 breast last year. Freya Anderson and Anna Hopkin are both capable of 52-mid splits on free, which helps their cause as well. The Brits will miss Kathleen Dawson on the lead-off leg, however.

That eighth and final spot in the championship heat is seemingly up for grabs, with France and the Netherlands in the mix, but both having a glaring hole somewhere.

The edge would probably go to the Dutch, as Maaike de Waard could step in on fly to join Kira Toussaint (back), Tes Schouten (breast) and Marrit Steenbergen (free). The retirements of Ranomi Kromowidjojo and Femke Heemskerk certainly sting.

France has three solid legs but their top female breaststroker is entered at 1:08.7.

The first sentence of the Breast analysis says that breaststroke has always been a weak spot for AUS on this relay. Samantha Riley and Liesel Jones would beg to differ as they both held the WR in the 100 Breast.

In Beijing Aus was slower on 3/4 legs but still won based on the strength of Jones’ breaststroke leg.

Only five more previews to go.

USA is clearly winning. I honestly see Canada or China in silver. I am picking Australia as bronze at best, possibly fourth.

Canada was/is/and still maybe that 106 breast split away from challenging for gold. When Kelsey Wog went 106.4 in Feb 2020, hopes for that leg were really high. Sidney had even gone 106 mid in 2019. Take that split and suddenly Maggie is diving in at the other 2s hips and likely closes to where Penny dives in at their shoulders or better …

Kylie is showing great and consistent in season form this spring as we’ve come to expect from her. Will be a huge hope that one of Sydney, Kelsey or Sophie can approach 106 to mitigate the US/AUS legs. Maggie/Penny combo is still better than either Us/AUS back half, unless the young Curzan/Huske duo drop 55/52 splits… Read more »

Sjöström and Sophie Hansson will shave about a second each I predict. Louise Hansson maybe half a second. It comes down to Rosvall’s form in the 100 back, if she delivers something steady enough around the minute mark, there will be three finishing legs right up there for Sweden to compete for a bronze. No Swedish trials and early champs so neither have had any fast races before this.

They could also take a huge risk and put Louise on back, with Sjostrom on fly and either Junevik/Astedt on free (54ish). Just depends how they want to play the game, do they want to be in with a chance from the start or play major catch up? But I seriously doubt they will use this alternate team…

Heats lists are out

The US will win comfortably and they only lost last year when Australia was stronger because of poor changeovers. Australia and Canada will fight it out for silver and bronze but not impossible that China could knock one of them off the podium.

Somewhat of an oversimplification of what transpired in Tokyo. AUS victory was due to three key factors which all played into each other

DO fully agree the only way USA will lose this one is via their own misadventure.

However, the only way I can see AUS missing the podium (and most likely silver) is either a break or… Read more »

Only if Sophie Angus can go 1:05 mid….Maggie swimming relays

If Kylie, Maggie, Penny are in 57 high, 55 anything, 52 low form, then even a mid 106 puts them right in the thick of it. Let’s assume the backstroke is a wash. US distinct ad on brst w/King, Canada’s weakness depending, 106 means Maggie tries to hold the gap with Huske giving Penny a chance to reel in Curzan. Aussie flyer their weak leg but followed up by 2 of the strongest free legs.