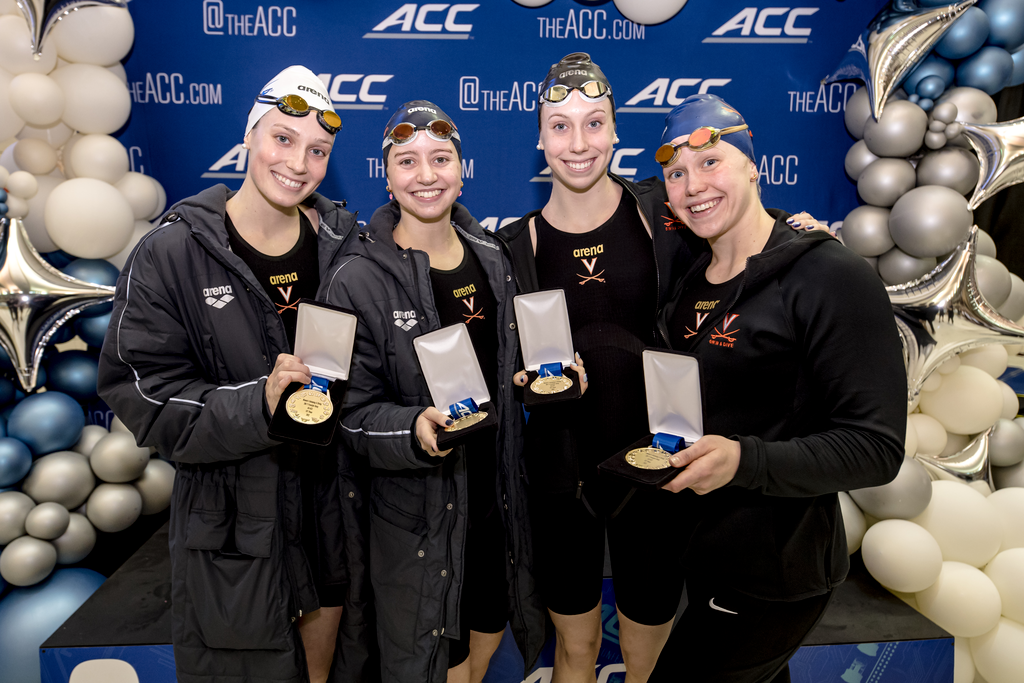 The Virginia women are favored to win both the NCAA team title and the 400 free relay, but a revamped Stanford group might have something to say about that. Archive photo via Matt Riley - UVA Communications

Virginia and Stanford are on a collision course for NCAA supremacy this week, and while the Cavs are the heavy favorites to walk away with a second consecutive championship title, the two teams will have plenty of exciting head-to-head showdowns in the pool.

The closest relay between the two on paper is the 400 free relay. UVA is the clear front-runner in the 200 free relay, and Stanford is the odds-on favorite in the 800 free. They’ll meet in the middle in the meet-ending 400 free relay, a race that will have no shortage of star power.

The Cavaliers will bring out their vaunted trio of Kate Douglass, Gretchen Walsh and Alex Walsh, who helped lead the team to the ACC title and the fastest time in the nation this season last month in 3:08.22

UVA used Reilly Tiltmann on that ACC relay (48.13 split), but there’s a chance they could also use Lexi Cuomo in that fourth spot at NCAAs, with Cuomo having anchored the runner-up team last season at nationals in 48.08.

For Stanford, they’ve got Torri Huske and Taylor Ruck, who have both been 47-low this season, and then freshmen Regan Smith and Anna Shaw both provided 47-second legs on the relay at Pac-12s. There’s no shortage of depth either, with Anya Goeders and Amy Tang having been 48-mid flat-start this year.

Here’s a comparative look at the two relays from the conference championships:

Douglass (46.81) and G. Walsh (46.86) are the two fastest swimmers in the individual 100 free this season, and even if Ruck and Huske had the swims of their life in order to match those two, UVA having that third dagger in Alex Walsh sets them apart.

Stanford would likely need something in the sub-47 range from Regan Smith to have a chance to win, and given that Smith is already swimming the 200 back and 200 fly individually that day, that’s a tall order.

While UVA and Stanford appear to be a clear 1-2 in this race, there are several other teams not far behind that will make this a close race, starting with Michigan.

The Wolverines are the third squad to have broken 3:10 this season, with defending 100 free NCAA champion Maggie MacNeil joined by stud freshman Lindsay Flynn, breakout sprinter Claire Newman and the ever-versatile Olivia Carter.

In Flynn, Newman and Carter, Michigan got three solid 47-high splits at Big Tens before handing off to MacNeil, who anchored in a blistering 46.14 as the team won the conference title in 3:09.84. It will be interesting to see if they switch up the order for NCAAs and lead off MacNeil, to put them at the front of the race from the get-go (rather than try and come from behind), but either way, it’s a strong quartet.

NC State is spearheaded by Katharine Berkoff, who has asserted herself as a legitimate contender in the 100 free after cracking 47 seconds twice at ACCs. That included leading off the relay in 46.93, beating Douglass head-to-head, and Kylee Alons is a good bet to be 47 low-to-mid.

The back-half of their squad featured Abby Arens and Annabel Crush at ACCs, who were 47-high and 48-flat, respectively.

Alabama comes in as the defending champs with a ton of high-end depth that will keep them in the hunt this year.

The Crimson Tide has three elite 100 freestylers in Morgan Scott, Kalia Antoniou and Cora Dupre who were all ‘A’ finalists in the event at NCAAs last season.

In that 2021 NCAA-winning relay, which includes a 46.9 anchor from Dupre, that trio was joined by Flora Molnar. This season, that spot is allocated for Diana Petkova, who came through with a best time of 47.69 leading off the SEC relay.

Scott was the fastest split there in 47.17 as Alabama did what they needed to win comfortably by over a second in 3:10.36. With more of a challenge from the top teams, we should see them in the 3:09s.

The others who have hit 3:10 this season are Ohio State and Lousiville, while Tennessee, Wisconsin and USC are back in the 3:11s.

OSU had some monster performances from Katherine Zenick (47.40 lead-off) and Amy Fulmer (46.74 anchor) at Big Tens, as both were firing on all cylinders with best times throughout the meet. If the Buckeyes got a similar showing at NCAAs, and Kristen Romano and Teresa Ivan turned those 48-lows into 47-highs, they’ll be right in the fight for a top finish.

For Louisville and Tennessee, the Cardinals had a big-time 47-low anchor from Arina Openysheva at ACCs, which was well under what she went individually. She would need to do that again, and the rest of the team to drop, to challenge the other top teams.

The Vols had three 47-second splits at SECs, and the only split 48-plus was freshman Ellen Walshe, who has proven to be dynamic in whatever she swims, but perhaps her freestyle has lagged behind the others a little bit. But given her talent, it’s easy to see her in the 47s to give Tennessee a very strong quartet that can mix it up with the best of them. It’s also possible she’s left off this relay and swims the other four, however.

And similar to what we wrote in the 200 free relay preview, 2019 champion Cal is lurking down the psych sheets as just the 11th-fastest team this season. The Bears are the only team inside the top 11 that was faster during their mid-season invite (3:12.36) than they were at the conference championships (3:12.41), and we fully expect them to be saving something big for NCAAs. But it’s difficult to predict given we haven’t seen them swim up to their usual level so far this season.

Izzy Ivey is their ace in the hole, splitting 46-high in both the Minnesota Invite and Pac-12 relays, and Elise Garcia has been the other constant on the relay this season as they moved some pieces around from invite to conference. Behind Ivey, Cal had five swimmers inside the top-16 of the 100 free at Pac-12s, and Emma Davidson (48.91) was the only one of them to break 49 seconds in the individual final.

Needless to say, the Bears need swimmers like Garcia, Emily Gantriis, Eloise Riley and Ella Mazurek to be 47-something with a takeover to be competitive. At Pac-12s they used backstroke specialist Isabelle Stadden (along with Davidson), which would be a solid option if the others aren’t swimming well.

USC beat Cal at Pac-12s and is right there in the hunt for a top-eight finish, led by Laticia Transom who has been consistent with five 47-point flat-start swims this season.

For Wisconsin, Sophie Fiske dropped a sub-47 anchor at Big Tens, which was huge, but they’d likely need her to do that again (and one or two others split 47) to crack the top eight.

Note: SB add-up includes the four fastest flat-start times from the team’s swimmers this season. This may not be indicative of a team’s ability in instances where a swimmer who is used on the relay doesn’t swim the 100 free at a taper meet.

Darkhorse: Florida – Freshman Ekaterina Nikonova is still getting used to the yards pool after joining the team in January, but she’s starting to heat up with a 47.9 split at SECs and a 48.2 flat-start in late February at the Bulldog Invitational. With Talia Bates having been 47-9 flat-start, the Gators shouldn’t be counted out with this duo.

Can a team have an A and B relay?

Cal is going to miss Izzy Ivey so much next year. I hope she has a great meet.

Crazy that A Walsh can split the same as Huske

I think it’s more of a reflection of how good Walsh is not that Huske is lacking. Tho not surprising that you turn it into a reason to trash Meehan. Your obsession with him during Pac12s still weirds me out.

yeah 46.72 is clearly an elite split, it’s just astounding since the 100 free isn’t even one of her “relevant” events. She’s clearly overshadowed by Douglass and her sister as sprinters at UVA but she’d be like the best sprinter almost anywhere else

There are gonna be many names that miss the A final this year. This year’s championship is going to be much faster than 2021, and we are going to be very shocked by some of the results

If Ruck is back to her 45 second anchors, that could change the conversation in this relay and the 400 medley

im quite ready for the Greg Meehan redemption arc so looking forward to see what Stanford does this weekend!

I think Stanford will be fine.