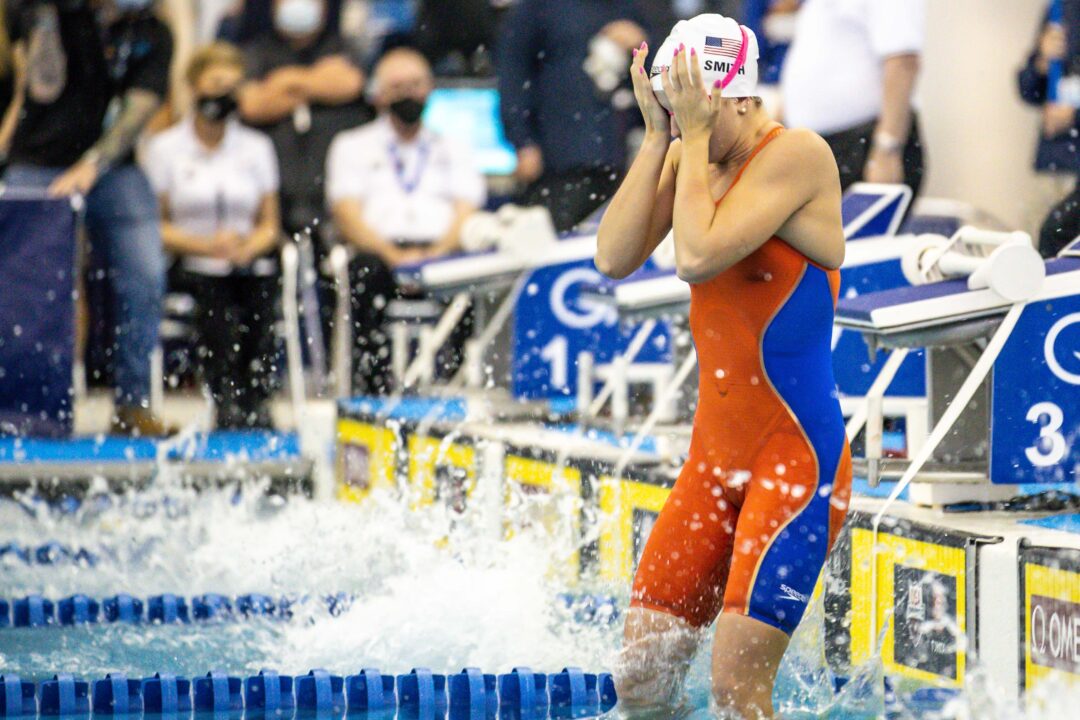 Regan Smith owns the American and U.S. Open record in this event. Can she add an NCAA title in the 100 backstroke to her already impressive resume? Archive photo via Jack Spitser/Spitser Photography

This might be the deepest race of the meet. The 100 backstroke features the American Record holder, multiple Olympians, the Olympic bronze medalist, last year’s NCAA champion, and the unofficial record holder in the 50 backstroke.

Regan Smith of Stanford broke the American and U.S. Open record in the 100 backstroke as a high schooler, which is her lifetime best (49.16). En-route to breaking the Pac-12 meet and conference record at the Pac-12 Championships a few weeks ago, Smith produced the nation’s top time in the 100 back this year (49.23). Given that she is the American and U.S. Open record holder, she is slightly favored to win the event, but this field is so talented that anything can happen.

Rhyan White of Alabama burst onto the national scene by qualifying for the Tokyo Olympics in the 100 and 200 backstroke events. White won this event at the SEC Championships (50.18). She currently sits 4th on the psych sheet (50.15), which is her lead-off split in the 400 medley relay at the Tennessee Invite in November 2021. At the 2021 NCAA Championships, White was 2nd to Berkoff (50.21).

Virginia’s Reilly Tiltmann won the B-final as a freshman at last year’s NCAA Championships (51.33). This year, she’s seeded 5th (50.42) with her time from the ACC Championships where she was 3rd behind Berkoff and Walsh. It would be huge for the Cavaliers if they can get two swimmers into the A-final of this stacked field.

Phoebe Bacon of Wisconsin was 3rd in this event as a freshman last year (50.39). Also at last year’s NCAA Championships, Bacon won the 200 backstroke, the event that put her on the Tokyo Olympic team last summer. Bacon sits 10th on the psych sheet (51.38), which is her winning time from the B1G Championships.

Finishing 2nd to Smith at the Pac-12 Championships was Isabelle Stadden of California (51.08). She sits 7th on the psych sheet with her time from the Minnesota Invite (51.00) . Last year at the NCAA Championships as a freshman, Stadden was 5th (50.87).

Despite Cook, Stadden and Countie all qualifying for the A-final last year, this year’s field is incredibly deep. There’s only room for eight on the podium.

Dark Horse–Nyah Funderburke, Ohio State: Funderburke posted the top time in the 100 backstroke at the B1G Championships (51.62), but wasn’t on the Buckeyes’ scoring roster, so she was unable to race in the finals at night. This year, there was a shift in the rules for the B1G Championships. Teams were still permitted to bring a roster of 24, but only 18 of the 24 were able to score. She sits 14th on the psych sheet with her prelims time from the B1G Championships. If she’s able to get up and go in the morning like she did a few weeks ago, Funderburke could secure herself a lane in the A-final.

This race has more talent than all the actors in the movie “Ocean’s Eleven.”

walsh-tiltmann fan club here!! gonna be a great race and would love to see both of these ladies in the A final

except she’s not in this race?

Will somebody go a 48 in the 100 back here? Possibly if not we are maybe a year away from that. It will be fun to see that. I think it will be Reagan for the win!

I think Gretchen is still figuring out how to carry over her 50 speed to the 100 back so I have a hard time seeing her beat Berkoff who is pretty dialed in and dropped time from ACCs to NCAAs last year.