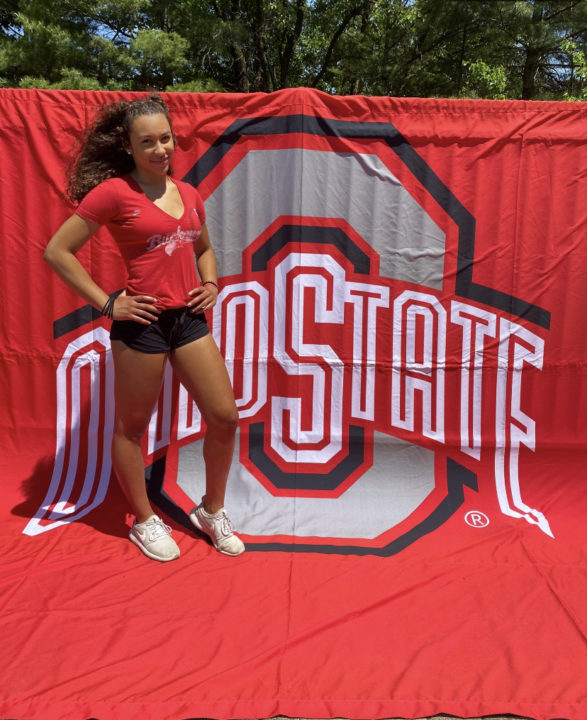 Nyah Funderburke didn't crack Ohio State's team for the Big Ten Championships, but she still qualified for NCAAs with her prelims swim in the 100 back.

Bob Bowman on David Popovici: “He reminds me of Michael at a very young age”

Bowman says “they were built similarly, really skinny, little guys… they’re generating speed by reducing drag, right? Which is the best way to do it anyway”

Popovici is the first swimmer to break 1:43 in the 200 free in a textile suit, blasting a blistering 1:42.97 at the European Championships.

There are a few new challenges for Big Ten head swimming & diving coaches this season, brought on by a change in the conference’s roster limits.

Ohio State freshman Nyah Funderburke exposed one of those challenges on Friday morning.

Previously, Big Ten coaches were allowed to bring 24 scoring athletes to the conference championship meet. This year, while they are still allowed to bring 24 athletes, only 18 of them are allowed to score, with divers counting as a half. The rest of the athletes they bring compete as exhibition swimmers – able to race in prelims, but not able to advance to any of the finals or score points.

For Big Ten coaches, this ramps up the pressure to make the ‘right’ choices for their roster.

While Funderburke wasn’t chosen among the Buckeyes roster of 19 scoring athletes (17 swimmers and 2 divers, based on what we’ve seen so far), she still erupted on Friday morning at the Soderholm Family Aquatic Center.

Funderburke swam a 51.62 in prelims, which was the fastest time of any swimmer in prelims – scoring or not.

The top qualifiers for the A-Final were Mackenzie McConagha (51.91) and Phoebe Bacon (52.38) of Wisconsin. In fact, the Badgers had 4 of the top 6 scoring swimmers in prelims with Mara Newman qualifying 5th in 52.46 and Kaylyn Schoof qualifying 6th in 52.53.

Ohio State has just one swimmer advancing to the A-Final: senior Emily Crane, who swam 52.63 for the 7th seed tonight. She has a season-best of 51.94.

While some of those swimmers, specifically Bacon, the U.S. Olympian, are probably saving their best swims for the night, Funderburke would have picked up big points for the Buckeyes if she had been on the scoring team.

She also swam 22.67 in the 50 free prelims, which was the fastest non-scoring time in that event as well. That swim would have put her into the scoring C-Final as the 22nd-best overall swim in prelims.

But it does show that, even for coaches who are in practice with athletes every day, how difficult it can be to predict breakthrough performances at conference meets. Especially for freshmen.

“We had built the team for team depth at the Big Ten meet. Scoring changed last year and we had to make tough decisions with a lot of unknowns.

As Dorenkott points out, the swim is still a sanctioned swim, which means that Funderburke is now a likely NCAA Championship qualifier for the Buckeyes.

It’s not uncommon for coaches to ‘miss’ on predicting the last few spots on their roster, though traditionally it is less obvious because those missed swimmers are racing at First Chance meets, not in the same heats as their conference-team counterparts.

Funderburke is an Ohio State legacy. Her parents both attended Ohio State, where her father Lawrence played the last 3 years of his college basketball career after transferring from Indiana. He led Ohio State to the 1992 Big Ten Championship before going on to an 11-year professional basketball career, including 8 years in the NBA.

Like her dad, Funderburke’s impact at Ohio State won’t necessarily be felt as a freshman, albeit for different reasons. Her heat swim ranks as the 4th-best by a freshman this season in the NCAA and would have scored points at last year’s NCAA Championship meet, even almost making the A-Final.

While she isn’t going to score points at this meet, she still has a lot more scoring to do for the Buckeyes.

And the silver lining is that Ohio State, who lead the meet after 2 days, will still outscore the Michigan Wolverines, who are 2nd in the event. Michigan didn’t qualify any swimmers for the A Final.

Love all the armchair coaches here saying “he should’ve known better”. He just won his third straight women’s conference championship with a roster designed for the previous set of rules. I think he’s earned a little grace in his decision making!

I’m curious about the rule change. Why limit scoring swimmers to 18 if you allow 6 more to travel? If they’re there, why not let them score?

Seems like a coaching disconnect— how can you not see big time drops like that coming, you see the girl everyday in practice

No surprise here. When you swim just for fun, with no pressure to get into the finals, you most likely would get your personal best.

Yes the coaches may not have known that she would drop this much, but you would think training would reflect a little of her potential, especially if they’re strong in the weight room, I believe there’s correlation between this and a longer taper needed.

Her dad was a beast on the hardcourt.

“Consequentialist.” I see Braden’s upping his game for conference champs this year. Don’t downvote me, I’m just being deontological.

Ooooooo, look at Ol Longhorn with the big word!

Unfortunately, Ohio State does not taper and barely rest mid-season for their invite. This makes it challenging to know how swimmers will do. This is a great example why some swimmers need more rest then others to really know what they can do. Some swimmer get the benefit of the doubt with the coaches only using metrics. Metrics doesn’t replace heart. Great swim.

I stopped reading after “does not taper.” Had to go lie down.