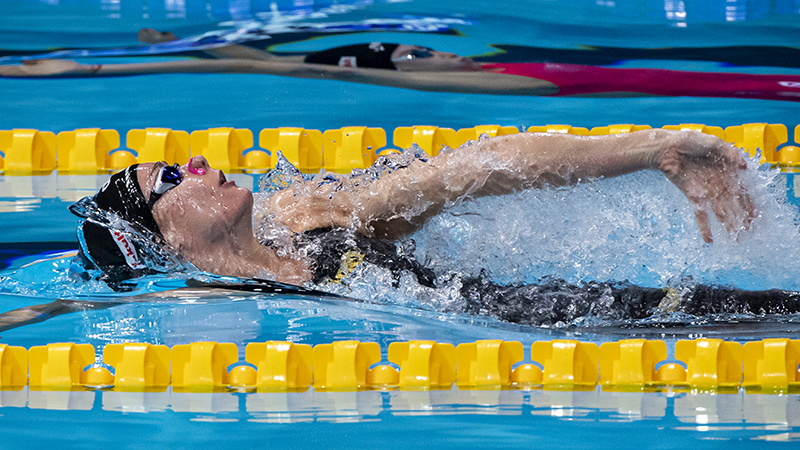 The men's 100 fly, women's 100 backstroke, men's 200 freestyle, and women's 50 free are among the events to be raced on Day 4 of Italy's Spring Championships Current photo via Giorgio Perottino / Deepbluemedia / Insidefoto

Simone Cerasuolo tied Nicolo Martinenghi’s Italian Junior Record in the 50 breaststroke, posting a 26.85 taking 2nd to Martinenghi, who posted a 26.49.

The swim comes in just 0.28 seconds off her World Record mark of 29.30, and puts her #1 in the world by comfortable margin.

Italian Record holders Piero Codia and Margherita Panziera return to contest their signature events: the 100 fly and 100 backstroke, respectively. Panziera holds a strong 0.65 lead over her closest challenger from the morning, Silvia Scalia, who has already broken the Italian National Record twice this week in the 50 backstroke. Codia, meanwhile, faces a tighter field in the men’s 100 fly where Codia clocked a 52.16 versus a 52.47 from Federico Burdisso and a 52.58 from Matteo Rivolta, who shattered the Italian Record in the 100 short course meters butterfly during the 2021 ISL season.

Sprint specialist Silvia di Pietro scared her National Record in the 50 freestyle, while the men’s 200 freestyle was stacked with 9 men under 1:49 in the 200 freestyle, including a pair of 1:47s from Stefano di Cola and Gabriele Detti.

Ilaria Cusinato and Alessia Polieri will battle in the women’s 200 fly, though both women will need to be significantly faster than their prelims times in order to secure a trip to Budapest for the World Championships in June. A similar situation is coming together in the men’s 200 breaststroke where Luca Pizzini and Alessandro Fusco are locked in a dead-heat going into finals, though both men have significant time to drop from prelims to finals to guarantee a spot on Italy’s World Championship team.

Though a full second off his lifetime best, Piero Codia won the men’s 100 fly in confident fashion, posting a 51.65, making him the only man sub-52 in the race. 200 butterfly specialist Federico Burdisso posted a 52.04 for second, while Matteo Rivolta, the National Record holder in the short course version of the race, posted a 52.16 for third. Christian Ferraro, who recently represented Georgia Tech at the 2022 NCAA Championships, placing 5th in the 200 yard butterfly, earned a 4th-place finish Tuesday in Riccione with a 52.35 effort.

No swimmer made the cut for the Italian World Championship team, though Codia was comfortably under the FINA ‘A’ cut of 51.96

The women’s 100 backstroke final was a tale of two races as Margherita Panziera, the National Record holder in the 100 and 200 backstrokes, took on Silvia Scalia, the National Record holder in the 50 backstroke. Scalia was out fast, turning in a 28.77 versus Panziera’s 29.44, though Panziera utilized her back-half speed to reel in Scalia, churning out a 30.81 over the final 50 meters, versus Scalia’s 31.56. Neither woman was under the cut to qualify for Italy’s World Championship team in this event, though Scalia is already qualified in the 50 backstroke, and Panziera the favorite to win the 200 backstroke, potentially earning a spot on the team as well. As Scalia is already qualified, she will likely get a chance to swim this race in Budapest.

Panziera was about 1.3 seconds off of her best time, while Scalia nearly hit her PR from 2019, only falling short of it by 0.20.

The start of the men’s 200 backstroke was delayed for approximately one hour by a power outage in the building, throwing off the timeline of the session.

A lengthy power outage delayed the beginning of the men’s 200 backstroke by approximately 1 hour. The men’s 200 backstroke was won by Matteo Restivo, who finished 2nd in morning prelims. Restivo was 2nd at the 50-meter turn, but had taken the lead by 100, and held on from there. Runner-up Lorenzo Mora was out a hair faster than Restivo on the first 50, and produced a slightly quicker final 50, but could not match Restivo in the middle 100 of the race, particularly on the 3rd 50.

While both Restivo and Mora swam under the FINA ‘A’ cut, neither made the Worlds cut set by the Italian Swimming Federation, which has become a trend throughout the meet.

Ilaria Cusinato was out fast, and led start to finish in the women’s 200 butterfly. By the 150-meter turn, Cusinato had built up a lead of nearly a second over Federica Greco, who lingered with a 1:36.87 to Cusinato’s 1:35.92. Both Cusinato and Greco would fall off the pace, though Cusinato would have just enough left in the tank to finish and hold onto her lead, closing in a 34.44. Alessia Polieri, who was only 6th at the 150-meter turn, produced a 33.70 on the final 50 to come back on everyone else in the field, passing all but Cusinato. Greco, meanwhile, faded to 4th in 2:12.68.

The women’s 200 butterfly produced no new qualifiers for the World Championship team. Not only did no swimmer crack the standard set by Italian Swimming, but none of them swam under the FINA ‘A’ cut, though 6 of the 8 women in the championship final were under the FINA ‘B’ standard.

Top-seed Luca Pizzini dominated the men’s 200 breaststroke, posting a 2:10.98. Pizzini didn’t quite lead start to finish, as runner-up Alessandro Fusco was a touch faster at the 50-meter turn, 29.73 versus Pizzini’s 29.81. However, Pizzini began to pull ahead on the 2nd 50, and then created the greatest distance on the 3rd and 4th 50s. Pizzini, the 2nd-fastest performer in Italian history, was nearly two and a half seconds off his best time.

No swimmers qualified for the World Championships in this race, though 7 of the 8 men in the championship final swam under the FINA ‘B’ standard.

Silvia di Pietro pulled off the victory in the women’s 50 freestyle, posting a 25.10, nearly 3/10ths off her best time from 8 years ago. Teenagers Chiara Tarantino and Viola di Carlo duked it out for 2nd, though Tarantino came out on top by a tenth.

The final overall was relatively pedestrian and resulted in no new qualifiers for the World Championship team.

Marco de Tullio picked up his second win of the meet in the 200 freestyle, following up his victory in the 400 freestyle. De Tullio dominated the field with a strong back-half, a tactic used by runner-up Gabriele Detti as well. De Tullio’s time of 1:46.29 does not qualify for the World Championships, though it is well under the FINA ‘A’ cut, making him the only man in the field under the FINA time standard. Stefano di Cola, who was the only man to split 1:45 in the 4 x 200 freestyle relay earlier in the meet (with a flying start), placed 3rd in 1:47.55.

The team from Centro Sportivo Esercito won the women’s 4 x 200 freestyle relay in 8:05.38, besting the rest of the field by over 2 seconds. It was a rather pedestrian championship final, however, as for all of the 32 women swimming, only 2 dipped under the 2:00 barrier, those being Sara Gailli of G.S. Marina Militare, which placed 4th, who split a 1:59.22, and Alice Mizzau with a 1:59.87, representing Fiamme Gialle, which placed 5th.

Panziera’s signature event is actually the 200 back.

The last 50m of the 200 free final was beautiful for Marco De Tullio (26.50 and new PB at 1.46.29) and really painful for Italian recold holder Filippo Megli (28.32, he was second at 150 m) who gave everything he had in that last 50m, and his difficulties to get out of the pool after the finish showed that. Bravo Filippo!

I’ll never understand why federations have qualifying times faster than the FINA cuts.

Because flying to WC’s costs money they don’t always have?

Winning the 100 fly final in 51.65, Piero Codia will be swimming at Worlds in the mighty (Olympic bronze medalist) Italian medley relay, beside Ceccon, Martinenghi and Miressi.

Is Burdisso officially out of World Championships? Didn’t even make Fina A cut in 100 fly and just third in 200 fly.

I think so. Anyway Burdisso is one of many Italian swimmers that said before these Nationals that the main event of their season will be the European Champs at mid-August in Rome (till four swimmers per nation in an individual event). So Burdisso will be certainly there.