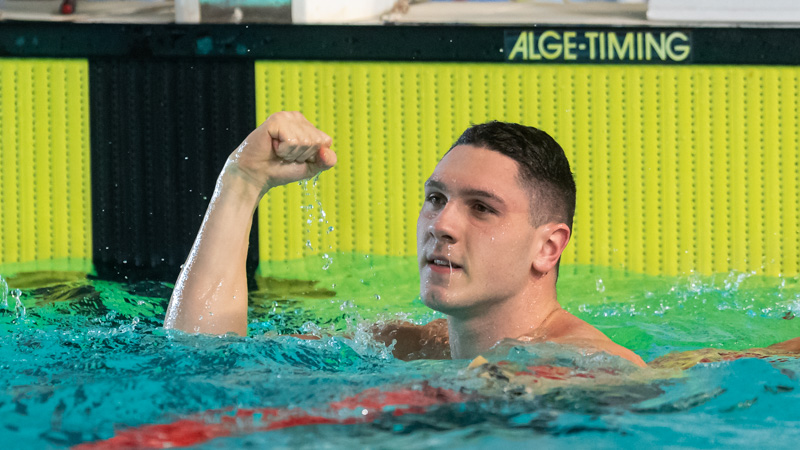 18-year-old Simone Cerasuolo tied Nicolo Martinenghi‘s Italian Junior Record in the 50 breaststroke in the final session of the 2022 Italian Spring Championships Wednesday night in Riccione, posting a 26.85 to take 2nd to Martinenghi himself, who posted a 26.49 to win.

Martinenghi set the original Junior Record at the 2019 Setti Colli Trophy in Rome on June 22nd of that year, meaning his record has stood alone for less than 3 years.

Cerasuolo’s time is also significant in that he has now officially qualified to race the 50 breaststroke at the World Championships in Budapest in June, having swam under the FINA ‘A’ cut of 27.33 and, more importantly, under the world championships qualifying time of 26.90 set by the Italian Swimming Federation.

Cerasuolo beat out long-time sprint breaststroke veteran Fabio Scozzoli to take 2nd in the 50 on Wednesday, meaning Scozzoli will not represent Italy in Budapest.

Surely Peaty more at risk loosing to Martinenghi in the 50m than Kamminga in the 100m? People seem to be focusing too much on an upset in the longer distance when surely he is more vulnerable over 50m?

He’s been beaten at 50, so it would be nowhere near as interesting is more the thing I think.