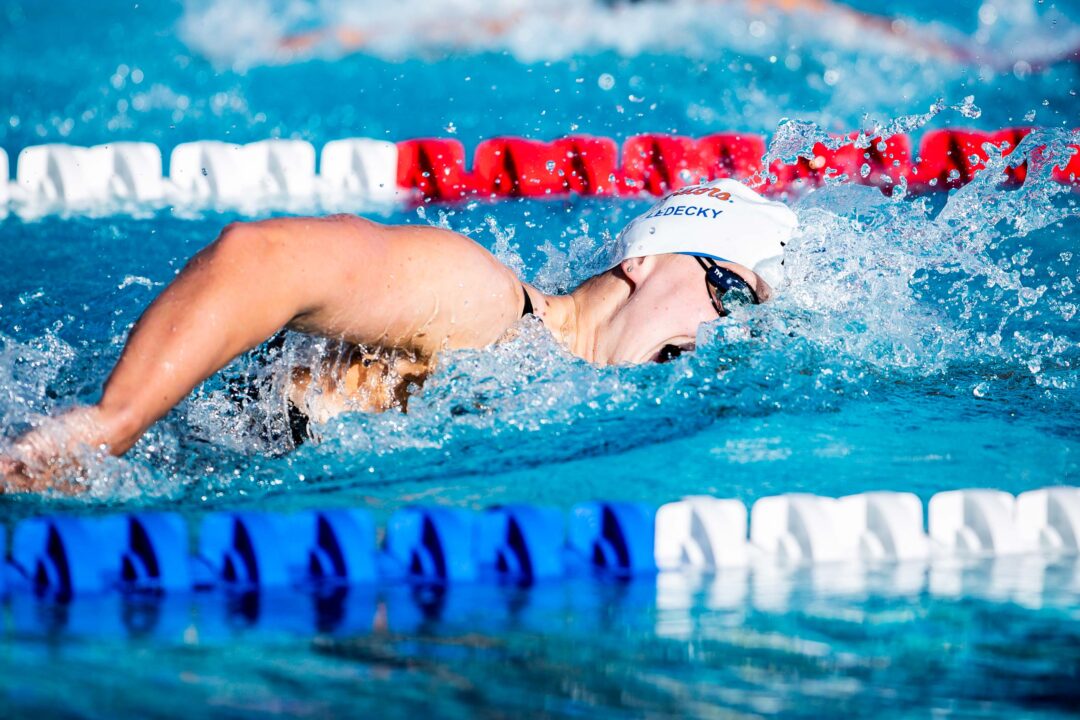 Follow along with us to find out who will win big at USA Swimming's 19th annual Golden Goggle Awards ceremony in New York City. Current photo via Jack Spitser/Spitser Photography

The 2022 Golden Goggle Awards are finally here! USA Swimming’s annual awards ceremony will take place in New York City at the New York Marriott Marquis. This is the 18th edition of the awards ceremony, which began in 2004 to recognize the USA’s most accomplished swimmers.

The awards this year are largely based on performances from the 2022 World Championships in Budapest, Hungary. Check out the full list of nominees for this year’s award here:

At the 2021 Golden Goggles, which recognized performances at the 2021 Tokyo Olympics, Katie Ledecky and Caeleb Dressel took home the swimmer of the year awards, while Lydia Jacoby, Annie Lazor, and Bobby Finke took home additional awards. Ledecky is nominated again this year and will have the chance to take home her 7th prize, having won every year from 2013 – 2018 and again in 2021.

Dressel is not nominated this year, having pulled out early from the 2022 World Championships. While he was a part of the 4×100 freestyle relay that was nominated for Relay of the Year, Dressel is not in attendance at this year’s ceremony. This year’s male nominees include 2018 winner Ryan Murphy, 2021 Male Race of the Year winner Bobby Finke, Carson Foster, and Nic Fink.

When this year’s planned host, Dan Hicks, became unavailable to host due to a death in the family, NBC sports reporter Ahmed Fareed was called up to take over the role. Fareed explained that he was asked just this morning if he would take over as host.

The first award of the night, the Breakout Performer of the Year went to Leah Hayes. Hayes’ breakout began at the 2022 International Team Trials when she qualified to race the 200 IM for USA, swimming a 2:09.99 to place second behind Alex Walsh‘s 2:07.84. Hayes improved upon that time during prelims in Budapest when she hit a 2:09.81 for second place and followed that up with a 2:09.82 in the semi-finals.

Her swim of the year came during finals when Hayes managed to break the 2:09 barrier in finals, swimming a 2:08.91 for bronze. Hayes was third overall in the event and became the new world junior record-holder, improving upon Yu Yiting’s 2:09.57.

At her first-ever major international meet, Hayes shaved more than a second off her best time, became the fastest-ever junior in the event, and reset the 15-16 national age group record.

It was one of the most exciting races we got to see at the 2022 World Championships and now it’s a Golden Goggles Award-winning race: the USA Women’s 4×200 freestyle. The quartet of Leah Smith, Katie Ledecky, Bella Sims, and Claire Weinstein with team Australia in lane 4 and China in lane 5.

This group of four consists of two season vets in Ledecky and Smith and two first-time senior international teamers in Weinstein and Sims. Weinstein opened things up with a 1:56.71 to get the team into second place behind Canada’s Summer McIntosh (1:54.79). After Weinstein, Leah Smith took over and posted a solid 1:56.47, which was quicker than Kayla Sanchez‘s 1:57.39 for Canada. Ledecky, who is a regular anchor leg for Team USA, was third here and she split a massive 1:53.67 to get Team USA into first place.

After Ledecky, it was up to Sims to get the Americans to the wall in first place. She was up against a stacked field including Mollie O’Callaghan, Penny Oleksiak, and Yang Junxuan. Sims hit a 1:54.60 to close out the race, out-swimming O’Callaghan, and Oleksiak. While Junxuan managed to pull off a quicker split than Sims (1:54.18), Weinstein, Smith, and Ledecky provided enough of a lead that it didn’t matter.

Team USA took home gold in the women’s 4×200 freestyle with a 7:41.45, lowering the Championships record in the process.

While presenting the award to Maxson, Olympic Cullen Jones said that Maxson has “impacted the highest level of swimming for decades.” “While the lights shine brightest on our champions in the pool, it’s the behind-the-scenes difference makers like Bill Maxson who help steer this proud organization through every single challenge” added Olympian Elizabeth Beisel.

The second recipient of this award was Carol Zaleski who worked in swimming for 45 years and served on the Board of Directors of USA Swimming for 39 years. Zaleski has contributed to the sport of swimming in several ways, including spearheading the development of underwater judging cameras in 2007. Zaleski also created the United States Sports Insurance Corporation during her tenure as USA Swimming President.

Zaleski was the President of USA Swimming for eight years beginning in 1986 and she was the first female to join the FINA Technical Committee. Zaleski recently retired from her duties in the swimming world and was recognized with this award a month after being inducted into the International Swimming Hall of Fame as an honourary inductee.

Katie Ledecky picked up her second award of the night by winning the Female Race of the Year for her 800 freestyle at the 2022 World Championships. Ledecky is considered to be the greatest female freestyler in history and she contributed to that reputation when she swam to gold in the 800 freestyle earlier this year with an 8:08.04. That time made her the quickest in the final by more than 10 seconds as Australia’s Kiah Melverton took second place with an 8:18.77.

Finke used his signature closing speed to out-swim the field and touch just 0.27 seconds ahead of silver medalist Florian Wellbrock of Germany. Finke’s time beat his own national record of 7:41.87, which he had swum in Tokyo to win gold. Finke also broke the American record in Budapest in the 1500 freestyle with his 14:36.70 to the silver medal behind Italy’s Gregorio Paltrinieri’s 14:32.80. Finke was also nominated for this award for that 1500 freestyle.

Leah Smith joins Katie Ledecky as a two-time Golden Goggles winner tonight, picking up the 2022 Perseverance Award. Smith swam consistently for Team USA for several years leading up to the 2021 Olympic Trials, including at the 2016 Olympic Games where she won 4×200 freestyle gold and 400 freestyle bronze.

Despite her prior success, Leah Smith had a disappointing performance at Olympic Trials in 2021 when she came up short in each event that she swam and didn’t qualify for the Olympic team. Smith explained during her acceptance speech how hard that hit her and what it means to be able to accept this award tonight.

Smith was given this award for her ability to persevere through a disappointing 2021 into 2022 when she bounced back and qualified for the World Championships in Budapest. Smith made it onto the team in both the 400 freestyle and the 4×200 freestyle relay. She went on to win medals in both of those events, placing third in the women’s 400 freestyle with a 4:02.08 behind teammate Katie Ledecky‘s 3:58.15 and Summer McIntosh‘s 3:59.39.

Coach of the Year: Anthony Nesty

The 2022 Coach of the Year award went to Anthony Nesty who coached several Florida Gators to success at the 2022 World Championships. Nesty served as head coach of the 2022 men’s World Champs team and lead that contingent to 17 individual medals in Budapest.

The final award of the night went to Bobby Finke, this year’s 2022 Male Athlete of the Year. This is Finke’s first time winning this award, having collected the Male Race of the Year back in 2021 for his 800 freestyle gold medal swim at the Tokyo Olympics.

Finke won the 2022 Race of the Year award as well for his American record-breaking 800 freestyle at the World Championships and he was the only man to be nominated twice in that category. Finke lowered the national records in both the 800 and 1500 freestyles in Budapest, hitting a 7:39.36 and 14:36.70, respectively.

Finke was one of three American men to win individual gold and silver in Budapest, along with fellow nominees Nic Fink and Ryan Murphy, but he was the only one to do so and also break two American records. Finke and Ledecky’s success tonight, along with their coach Anthony Nesty‘s win, provided a strong showing for the Florida Gators as they collectively won five individual, and one relay award at tonight’s ceremony.

THE RED CARPET – WHAT DID THEY WEAR?

My Picks for Award Winners:

Anyone know where we can bet on NCAA swimming?

Sims. 1:54.6 split was impressive, and I have her for breakout performer of the year.

Where is Kate Douglass in most of these categories? are you kidding me?

What categories would you have nominated her for? These awards seem to be based on international competitions. She won one individual bronze in the 200 breast which is good. She won a relay bronze in the 100 free relay with a fairly pedestrian 53.61, and then a heat bronze from a mixed relay.

Can’t really nominate her for swim of the year when another American won gold in her only individual race. If you only include international results, she doesn’t really come anywhere near the top 5 best female swimmers of the year. I suppose you could nominate her for breakout but she already won an individual Olympic medal last year so that’s borderline.

Nesty’s amazing, but Ron Aitken was for sure robbed this year.

Always have to remember that, in reality, these awards are “of the meet” awards, not actual “of the year” awards. By design.

I think on totality, Aitken is the “Coach of the Year.” If it’s viewed as an “Of the World Championships” award, I think Nesty is probably the right choice. Though Dressel not doing Dressel things (still won 2 gold medals) certainly gave the committee the opportunity to give it to someone else.