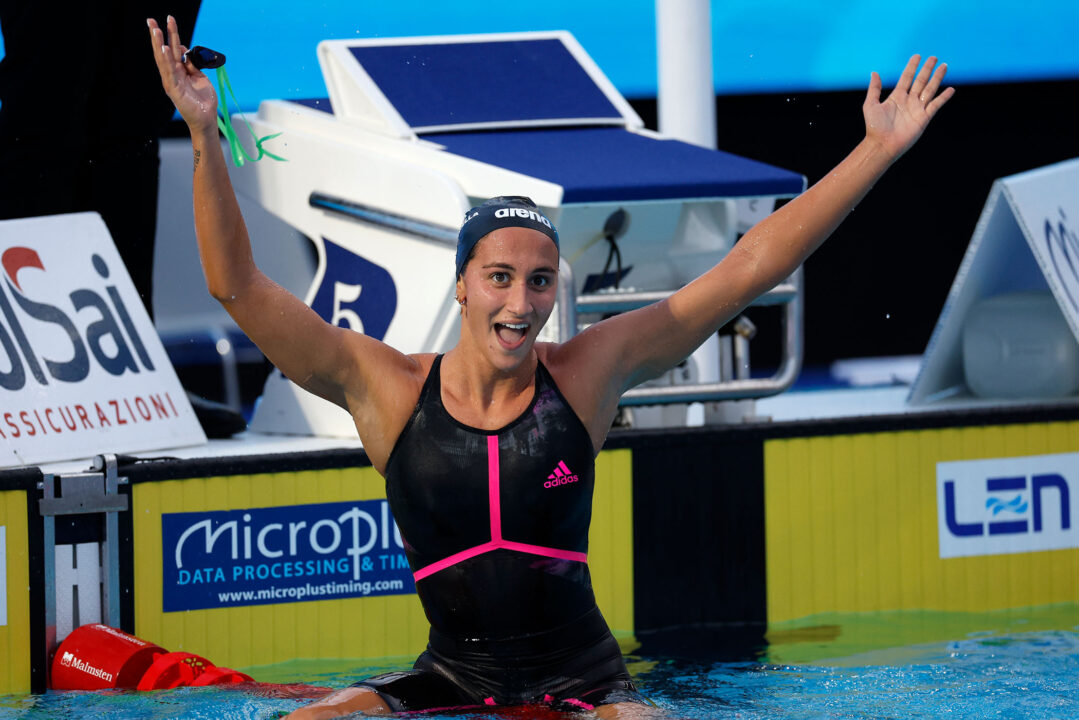 Italian star Simona Quadarella is going to be attempting to complete her sweep of the women's distance events at these Championships by taking the 400 today. Stock photo via LEN/Simone Catsrovillari

There are no scratches to report in the top 20 seeds in either the women’s or men’s 400 frees.

This is the shortest prelims session of the meet, featuring only the women’s 400 free and men’s 400 free individually. There are 4 heats of the women’s 400 and 5 of the men’s. Italian star Simona Quadarella is going to be attempting to complete her sweep of the women’s distance events at these Championships. Quadarella has already won the 800 and 1500, defending her titles from last year in both. The 400 will be her toughest challenge of the meet, as it’s her weakest of the distance events and Germany’s Isabel Gose has swum well this week.

Don’t blink because Romanian superstar David Popovici is in the first heat of the men’s 400 free this morning. Popovici should dominate that heat, and after breaking the World Record in the 100 free and swimming the fastest textile time in the 200 free already at these Championships, he may have something special in store for us in the 400.

Popovici isn’t the only junior to keep your eyes on in the 400 today, as 16-year-old Italian Lorenzo Galossi is seeded 8th in the event. Galossi won Bronze in the 800 free earlier in the meet, breaking the WJR. That means Popovici and Galossi have combined to break the 100 free, 200 free, and 800 free World Junior Records this week.

Outside of the juniors, German Lukas Martens is the top seed, coming in at a sizzling 3:41.60. He comes in well ahead of #2 seed Felix Auboeck, who is seeded at 3:43.58. Italy has been swimming well at these Championships, and outside of Galossi, Gabriele Detti and Marco De Tullio are live to make the final as well. Matteo Ciampi could make some noise too, but we have to keep in mind that only 2 swimmers per country are permitted to advance beyond prelims in an event.

1500 champion Mykhailo Romanchuk is seeded way back at #19 and shouldn’t have an issue advancing to finals, especially since he led prelims in both the 800 and 1500 free at this meet.

Popovici first official 400 free in a 50 meter pool in more then 2,5 years. His PB right know is slower then the women world record with nearly 2 seconds.

His pb is a 3.48 from this year Romanian championships

AND WHY THAT WASNT SHOWN HERE, or on swimrank/fina?

Imagine if she wore not adidas