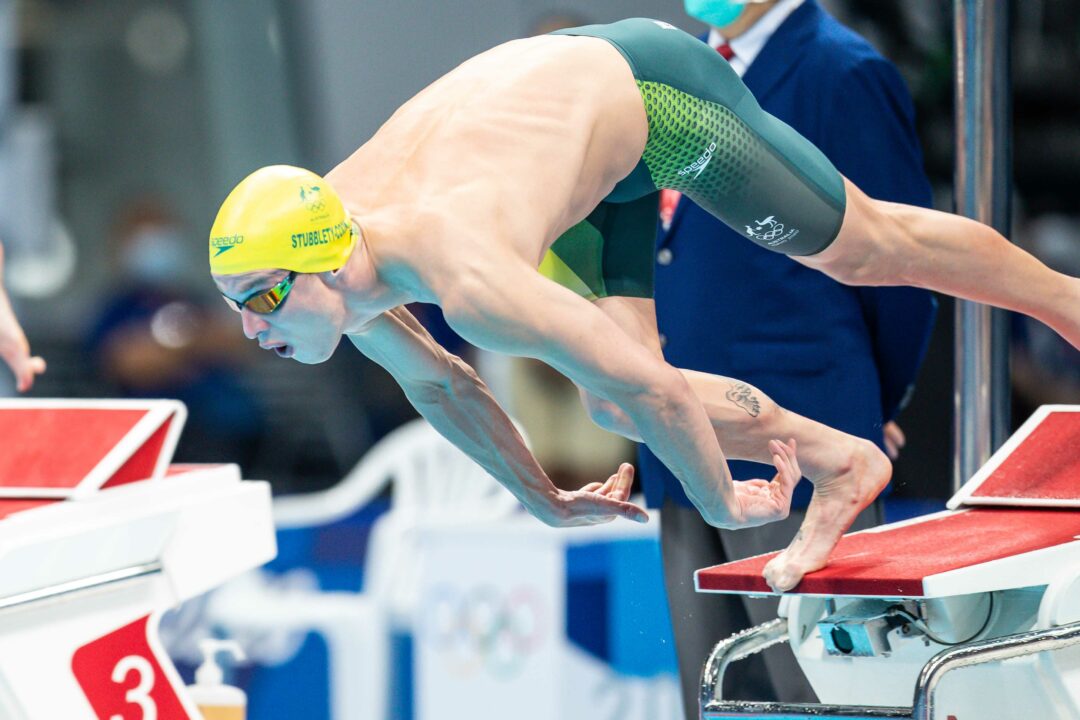 Perhaps the best swim of the morning came in the women’s 50 breast, where Chelsea Hodges nearly took down the Australian Record. Hodges swam a 30.22 this morning, nearly hitting the 13-year-old record of 30.16.

Superstar Kyle Chalmers also made news after revealing he may now be attending the World Championships this summer after previously deciding to sit the meet out. Chalmers is potentially reversing course after the somewhat surprise 51.67 100 fly he posted in finals of day 1. He led prelims of the men’s 50 fly this morning clocking a 23.42.

Mollie O’Callaghan, the 18-year-old rising star, continues to turn heads. After winning the women’s 100 free in a blistering 52.49, she turned around and flexed her backstroke muscles this morning, leading prelims of the women’s 50 back with a 27.80. She’ll have a fight on her hands with 19-year-old Bronte Job, who swam a 27.86 this morning.

26-year-old Brianna Throssell got the job done in this final, breaking out ahead of the field, and growing her lead through the end of the race. Throssell had excellent front end speed, staying even with the World Record pace through approximately the first 40 meters of the swim. She kept her 50 splits within 4 seconds of each other, going out in 26.79, then coming home in 30.52.

In her interview after the race, Throssell spoke a bit on how she’s transitioned her training from focusing on the 200 to a more sprint, 100-focused training model.

Alexandria Perkins came in just shy of the FINA ‘A’ cut of 58.33, taking 2nd in 58.39. Australia will have some decisions to make in terms of their World Championships roster, as they’ll likely want a 2nd 100 butterflier on the team to handle prelims of the 4×100 medley relay.

Kyle Chalmers continues to show his progress in the butterfly events, taking the national title in the 50 fly tonight after finishing 2nd in the 100 fly last night. He broke out ahead of the field tonight, waiting about 30 meters before taking his first breath. William Yang and Isaac Cooper closed on him a bit in the final 15 meters of the race, but King Kyle would get his hands on the wall first, as he’s done so many times before in his career. The swim tonight stands as a personal best for Chalmers.

William Yang had a phenomenal swim as well, coming in under the FINA ‘A’ cut with a 23.50 for 2nd. While that doesn’t guarantee Yang a spot on the World Championships roster, it was a great swim nonetheless. 18-year-old Isaac Cooper was right behind, getting his hands on the wall in 23.53.

Cody Simpson continues to have a fantastic meet, swimming a 23.68 for 4th.

We can’t over look 25-year-old Jenna Strauch‘s swim tonight, as she sped to a 30.82 for 2nd. Strauch was the only other swimmer in the field to dip under 30 seconds, also dipping under the FINA ‘A’ cut. Although, we need to give another reminder that the 50s of fly, back, and breast are not serving as qualifying events at this meet. However, given Strauch won the 100 breast last night, it seems likely she’ll end up swimming the 50 breast in Budapest as well.

Zac Incerti exerted himself on the field, opening up a big lead on the first 100 of the race, then expanding that lead through the 3rd 50. It appeared Incerti was going to run away with the event, until he tightened up over the final 20 meters of the race. Although his stroke clearly slowed down right at the end, he was still able to hold off 400 freestyler Elijah Winnington, who was charging fast at the end. Both Incerti and Winnington came in well under the FINA ‘A’ cut of 1:47.06, with each punching their tickets to Commonwelath Games and World Champs.

Mack Horton was able to run down 16-year-old Flynn Southam on the final 50, grabbing 3rd with a 1:46.70. With Southam clocking in at 1:46.82, Australia is looking incredibly strong in the 4×200 relay for both World Champs and Commonwealth Games.

Kaylee McKeown put together a fantastic race across all 4 strokes, tearing to a new personal best of 4:31.74, which marks her first time under 4:32 in the event. McKeown didn’t take the lead until around the 150 mark, and she only grew her lead from that point on. Despite being the World Record holder in the 100 back, it was actually the breaststroke leg where McKeown really took the race over, splitting an incredibly fast 1:15.74. She was able to come home in 1:03.45, resulting in the 2nd-fastest time in the world this year.

In her post-race interview, McKeown said she will definitely be racing the 400 IM at Commonwealth Games, and she’s yet to decide if she’ll take the event on in Budapest at the World Championships.

18-year-old Jenna Forrester put together a phenomenal swim herself, clocking a new personal best by 3 seconds. In her interview, Forrester said she’s put a lot of her training focus in cleaning up her turns and transitions in the race, and that training appears to have paid dividends here tonight. Forrester blew away the FINA ‘A’ cut of 4:43.06.

18-year-old Mollie O’Callaghan and 19-year-old Bronte Job pulled away from the field, both posting top 10 times in the world this year. Despite a more recent focus on her freestyle events, O’Callaghan now finds herself just 0.30 seconds off Kaylee McKeown‘s Australian Record of 27.16.

The swim also marks a personal best for Job, and both women would be finals contenders if they end up swimming the race at World Championships. O’Callaghan is already on the team in the 100 free, so she’ll be guaranteed the option of racing the 50 back at World Champs if she chooses to do so. We’ll have to wait to see if Job earns a spot on the team when all is said and done.

Olympic Champion Zac Stubblety-Cook was in his bag tonight, getting out to a quick 1:01.8 on the first 100 before pulling away from the field in a hurry on the final 100. He was playing with the World Record pace the entire way, bursting through at the very end of the race. With the performance, Stubblety-Cook becomes the first man in the history of the sport to crack 2:06 in the LCM 200 breast.

We’ll have more in depth analysis on his performance tonight in a separate article, however, it’s still worth noting just how incredible his ability to maintain the speed in his stroke through the entirety of a 200 is.

Matthew Wilson also qualified for Budapest, turning in a solid 2:10.14. Wilson, a former World Record holder in the event himself, expressed a bit of disappointment in his swim, saying he was really struggling at the end. Nonetheless, Wilson is moving on to the World Championships and Commonwealth Games this summer, where a swimmer of his caliber is no doubt a medal threat.

It was a close race until Charli Brown dove in to anchor the Manly relay to victory, throwing down a blistering 55.82 to rocket into the finish. Teammates Lillie McPherson (58.21), Georgina Seton (58.68), and Lauren Wilson (59.77) helped get the job done as well.

In what turned out to be a thrilling race, Sydney University’s James Koch blasted a 49.68 on the anchor leg, eating into SOSC anchor Declan Quirk’s lead. Koch was ultimately unable to fully catch Quirk, getting his hand on the wall 0.3 seconds behind Quirk.

The whole Kyle and Cody thing is so dumb. Wanna get on the team? Then qualify for it

I know Kyle said his dream was to represent Australia in butterfly and he deserves his spot – but we all know the real reason he wants to go to Worlds thanks to this excellent journalism.
https://www.dailymail.co.uk/sport/sportsnews/article-10832281/Is-swimming-love-triangle-going-derail-Cody-Simpsons-Commonwealth-Games-bid.html

I don’t think age is the limiting factor but there’s absolutely no reason to think either of those relationships have happened.

I literally cannot think of two swimmers on the team that are less likely to have been in a relationship than Kyle and Emma. Titmus, Horton and Larkin being in a secret throuple is more believable.

Gotta believe everything published in the daily mail

The guy (ZSC) get’s a WR and SwimSwam still does not have a bio for him. What is the world coming too????

No USA no bio, that’s the bargain over here

I expected ZSC to break the WR – at the WC’s. If my history is right he’s the first Australian male to break a WR since Eamon Sullivan in the 100 FS semifinal in Beijing 2008.

Long course maybe. Although Wilson had equaled the 200 breastroke in LC. Chalmers has broken 100 free short course in 2021.

Completely forgot about Sprenger. It was at the height of the supersuits era but a WR nevertheless.

W100FLY: McKeon’s presence has certainly papered over the current shallowness of the AUS female fly ranks. Beyond her, Throssell is fringe World final level on a good day but the massive fallaway behind her means she swims both heats and finals of 4XMED regardless of another 200 qualifier.

M50FLY: For all the huff and puff (confected or otherwise) re Chalmers & Simpson; there’s nothing really to report here. Chalmers winning time is still a long way off the business end of this event internationally.

W50BRS: Congratulations due for Hodges for her NR, however I question whether it will be sufficient to sway selectors to send her to Budapest.

Yes – some events like W100Free you hardly notice our top 3 swimmers are missing. Some like W100Fly you think ‘oh gawd’.

She’s not a junior anymore, she turned 18 a little while ago. I had the same thought about her 100 free.

While not a WJR her 100 free was the fastest 18 year old or younger ever.

What was Oleksiak’s fastest at 18 or younger?

Looks like most of the elite Aussie swimmers have been able to develop and execute their insanely fast last 50 to perfection, which seems to be the winning strategy these days. I wonder if the rest of the world is paying attention and trying to do the same.