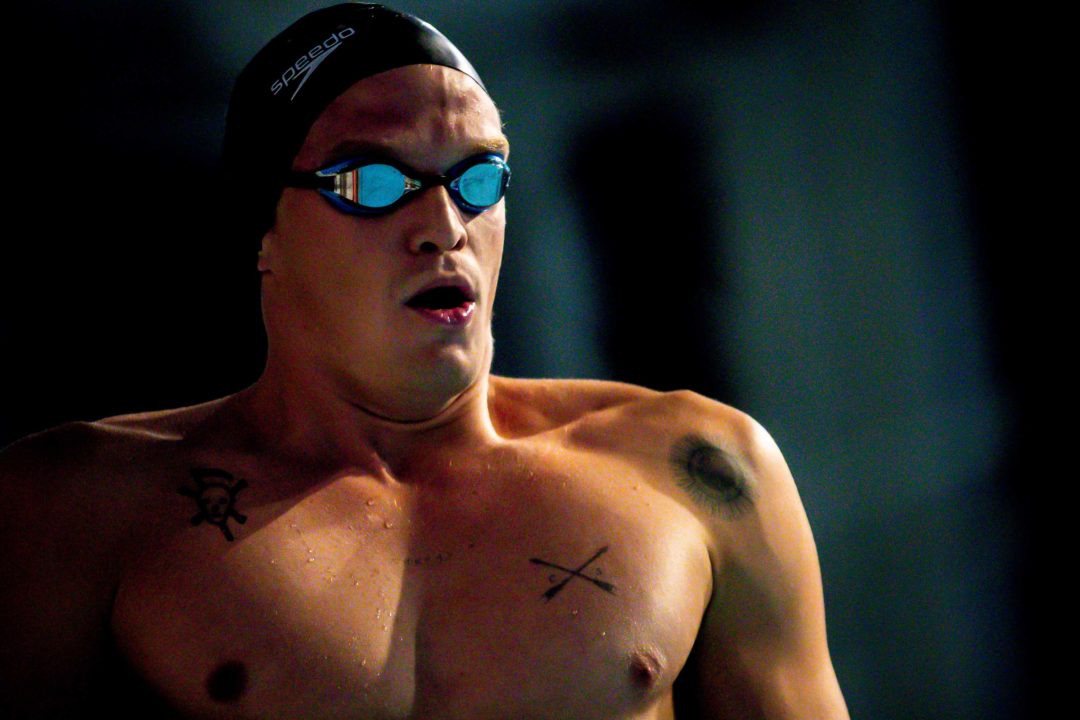 Upon seeing the news of his first senior Australian team berth, Cody Simpson clasped his hand over his mouth and couldn't stop smiling. Archive photo via Jack Spitser/Spitser Photography

In a candid video posted on Instagram, pop star Cody Simpson shared the moment he got the text confirming his selection for Australia’s 2022 Commonwealth Games roster headed to Birmingham, England, in July.

Upon seeing the news of his first senior Australian team berth, a visibly-emotional Simpson clasped his hand over his mouth before receiving a hug from Australian Olympic champion Emma McKeon.

Simpson earned his spot with a third-place finish in the 100-meter butterfly finals that equaled the qualifying time of 51.96, slightly slower than his personal best of 51.79 set in the prelims. The 25-year-old Simpson, who has been training for less than two years following a decade-long hiatus from competitive swimming, has already shaved a second off his 52.94 from last year’s Olympic Trials.

“I was holding my breath all week after the 100m fly final and this is the moment I found out,” Simpson wrote. “If you’d have told me 2 years ago when I had started training in a backyard pool during lockdown that I’d be here today, I don’t know if I’d have believed you.”

With Olympic gold medalist Kyle Chalmers initially planning to sit out next month’s World Championships, Simpson’s third-place showing was thought to have been just enough to book him a ticket to Budapest, Hungary. Then Chalmers finished second behind Matt Temple in the 100 fly final, apparently surprising himself in the wake of shoulder surgery this past December and convincing him to reverse course. Chalmers’ decision to compete at World Championships after all meant that Simpson would be left off the team since only the top two advance.

Simpson said he “absolutely” understood Chalmers’ decision, but the situation spiraled into a media controversy featuring one of the wildest headlines you’ll ever come across due to Simpson’s relationship with McKeon. A tabloid narrative emerged alleging a “love triangle” as motivation for Chalmers’ reconsideration of his decision to swim at the World Championships. McKeon, who didn’t swim at last week’s Australian Swimming Championships because her Tokyo Olympics success gave her automatic qualification, called the narrative “strange.”

“That is my personal life and I am quite a private person so, yeah, I don’t really like having it as news,” McKeon said at Sunday’s team presentation. “I just block it out. As I said, I am a private person and I think I will always be that way. I am close to my family, close to my friends, and … they’re the ones I open up with.”

Simpson similarly put to rest any talk of a romantic rivalry.

“People like to spin a story and find a story out of something,” Simpson said. “He (Chalmers), considering the limited prep he has had, got up and gave an incredible effort so nothing but respect to him for doing that.

“And he’s well within his rights to decide to swim,” he added. ” … If the tables were turned and I was in that position and I said I wanted to swim, I’d hope people would understand and respect that I had earned that place.”

The controversy, manufactured as it may be, appeared to take a real toll on Chalmers. He didn’t attend Sunday night’s team announcement, saying he was “taking some time for me and my mental health.”

“The negative media attention surrounding my decision to compete at worlds and the made up storylines surrounding my personal life have been more than I can handle,” Chalmers wrote. “After giving my all to the sport and being so welcoming to the media all my career, it’s a shame to see them publishing storyline’s questioning my integrity all for the sake of extra clicks and money.”

Omg is that Emma McKeon hugging him???

Let’s see YOU do that now, Emma Hernan

As a strange coincidence, Cody made his first senior team swimming a 51.96 in the final. 51.96 is the time Emma swam to win her first Olympic gold.

I would like to see Cody race Emma – butterfly (Cody) v freestyle (Emma) – and see who wins ? Who knows Emma might even swim a new pb as a result

I remember when it was reported that he returned to swimming — and I told myself: MAGIC!
. . . .Guess he has proven himself to the world now!

So cool. And the headlines are unimportant. A swimmer found their way back to the sport they love and are having a blast and getting results. #thingsiloveaboutswimmimg

Tbh kind of feel like the best thing would have been for Cody and Kyle to make a joint statement or interview.

Well they’ve both been pretty respectful of each other and made it clear to the media that what they’re saying about the situation is wrong. Hopefully that clears it up.

Headlines aside – which were frankly stupid and hurt the swimmers…..

Do we know if after Cody’s success as a young swimmer he kept training? Or was he out of the pool all together and took up training with Brett Hawke in the last two years or so? Poolwise was he doing anything in between?

Not really too much from what I know. He trained with Salo and Trojan elite for a short while back in 2019 but aside from that don’t think so.

It’s crazy to think one can do that. I am not downplaying his hard work because he obviously put it in. It’s more it just goes to show how much genetics can play a role in success.

Also being a singer can contribute to great cardio/lung capacity. I don’t know what Cody’s shows looked like but this question reminded me of Lady Gaga singing at the top of her lungs while going all out on an elliptical to prepare for her shows