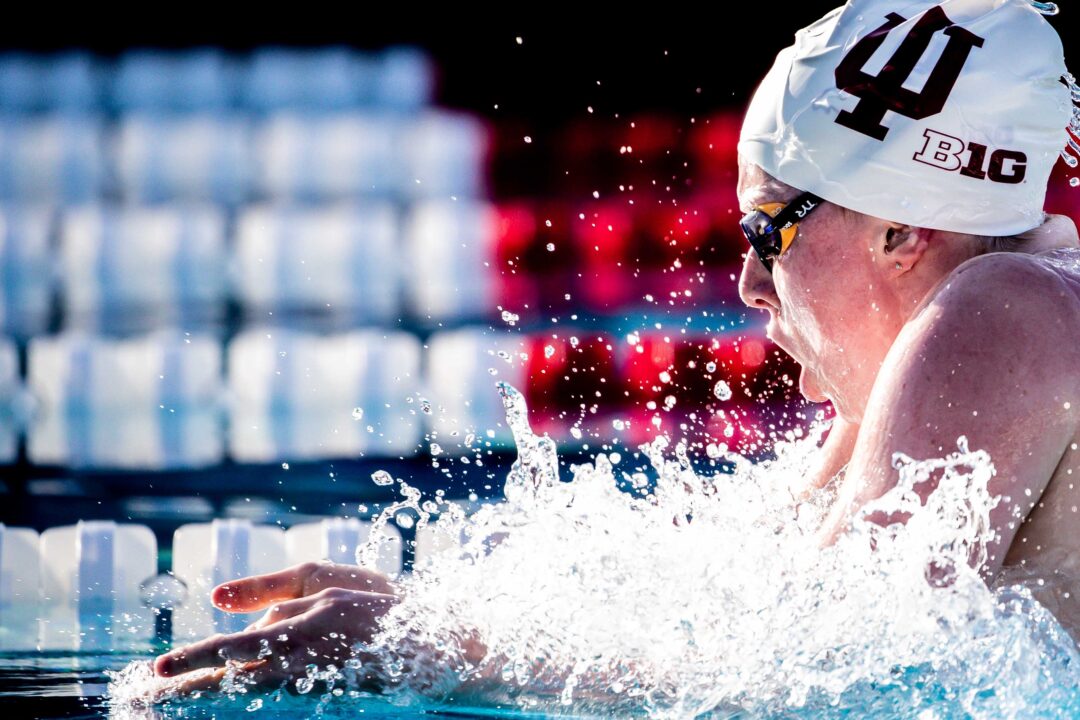 Defending champion and World Record-holder Lilly King (above) is ranked first in the United States this season by a full second in the 100-meter breaststroke. Archive photo via Jack Spitser/Spitser Photography

The women’s 100 breast event at the upcoming U.S. Olympic Trials has a lot of question marks now that 2016 Olympic bronze medalist Katie Meili has retired.

World Record-holder Lilly King is the clear favorite in this event, leading the top eight swimmers in the Olympic Qualification period (November 28, 2018 – May 30, 2021) by more than one second:

King has been untouchable in this event. She is ranked 1st in the world this season by one-third of a second:

Despite the coronavirus pandemic postponing the Olympics for a full year, King is confident And she has every right to be. It will be much more of a competition for the 2nd spot at this year’s Trials, where a battle is brewing between veterans and up-and-coming swimmers.

One thing King didn’t predict, though, was Lydia Jacoby. In February, King told SwimSwam the extra year didn’t faze her because she didn’t have any age groupers on her tail to benefit from another year of training.

17-year-old Jacoby has been making headlines this season after she posted the #3 all-time U.S. 100 breast in her age group (1:06.38). While she isn’t close enough to King to threaten her roster spot, no one is, Jacoby has a solid chance of competing alongside King in Tokyo.

King’s Indiana training teammate Annie Lazor is also in contention to make the U.S. Olympic team in this event. Lazor finished 10th in this event at the 2016 Trials, after which she decided to stop competing and had no intention of returning to the sport as an athlete.

Lazor made a phenomenal comeback in 2018, and she has been a dominant force in both the 100 and 200 breast this season.

During the 2020 International Swimming League season, Lazor was the first swimmer to break King’s 30-race-long undefeated by out touching her in the 200 short course meter breast.

Most swimmers have not been able to match their best times during the qualification period, with the exception of Jacoby.

Breeja Larson has said this will be her last Olympic Trial run as she makes one last push to make her second Olympic team. She made the 2012 team, taking 6th place in this event at the London Olympics, but missed making the Olympic Roster in 2016 after finishing in 4th place. She was about 1.5 seconds behind where she needed to be to beat Meili for 2nd place.

Larson does not have any long course meter times logged in the USA Swimming database for this season, so it is hard to gauge the likelihood she can crack the top two. Her lifetime best stands at 1:05.92 from the 2012 Trials.

King, Hannis, Jacoby and Lazor had a recent showdown at the Pro Swim Series in April where Jacoby snagged 2nd behind King by .68. Lazor out touched Hannis by .07 to get 3rd place. She finished one-third of a second behind Jacoby.

Emily Escobedo has improved drastically in the 100 breast since her first Olympic Trials in 2016 where she finished 54th in prelims. While Escobedo is mainly a 200 specialist, she has earned a spot among the top 100 breaststrokers in the country this season with a 1:07.11 at the January Pro Swim Series.

USC rising sophomore Kaitlyn Dobler is set for her Olympic Trial debut; she recently posted her season-best time of 1:07.80 at the April Pro Swim Series.

Another factor is that multiple swimmers at the top of the 100 breast this season do not seem to be focusing on the event. 200 breast specialist Bethany Galat made the semifinals of the 100 breast in 2016, but scratched it to focus on the 200 where she placed 3rd behind Hannis.

Melanie Margalis is also towards the top of the 100 breast rankings, but she leads the field in both the 400 IM and 200 IM. As Margalis finished 7th in the 100 breast Olympic Trial semifinals in 2016 and ultimately scratched the final to focus on the 200 IM, we will leave Margalis out of our top 8 predictions.

Wave I Standout: Janessa Mathews (PB: 1:09.10) – As a high schooler, Mathews went 1:09.10 in this event back in the summer of 2018 – just before the Olympic Trials qualifying period opened. That time would have qualified her for Wave II. Later that winter, Mathews hit a personal-best 1:00.9 in the short course 100-yard breast. Both events plateaued, though, over the next three years. But Mathews just broke through this year as an Ohio State freshman to go 1:00.0 in the 100-yard breast. That could suggest a similar drop coming in long course, where Mathews could be a top candidate to move on to Wave II.

I thought Breeja Larson was retired.

Unrelated but I saw another comment a while back saying if Dean did something crazy like a WR, OR, or AR, swim swam should be temporarily renamed to honor dean. Pls spread the word.

He already has an AR (scy), and if he makes the 400 relay odds aren’t that bad that he could set a WR/OR

Jacoby vs Lazor should be interesting, I think it takes a 1:05-high to make it so both would have to go PBs

I think it will be nice if in the list of contenders the current season ranking is mentioned along with time. It is very exciting to be an Olympian and fans of particular swimmer should be very proud if the the swimmer they are fond of makes Olympic team. But I personally don’t much care about that if such a swimmer won’t even make a final.

Don’t you worry, Yefimova won’t even sniff the podium this time around.

You’re gonna have to change your name to Smith-King-Curzan-Manuel pretty soon!

Once Dahlia has been officially eliminated from Olympic Team contention.

Unfortunately the changing of the name doesn’t change the character. 😀

Several contenders for the backstroke spot. Everyone is assuming Regan Smith will win it because she the WR holder but I won’t be surprised if she gets beat.

Baker was the WR holder not too long ago and very few think she’ll make it. If just seems like Regan Smith’s backstroke has been a little off compared to her WR season in 2019.

I understand that in season times don’t really matter but her fly swims have been great. That makes me wonder if her backstroke is just a little off.

King Goes 1:05 by doing threshold doubles everyday leading up to the meet.

With the way Jacoby is dropping, I’d say she’s got a great shot at going 1:05 and making it.

If she’s really doing all that yardage then she should be like 1:03 high when shaved and tapered

That’s what I don’t get about all of the IU humble brags about their crazy sets. So far, none of them have swum significantly faster when tapered, so what’s the point? I will withhold my judgment until after Trials though. They may prove me wrong.

According to FINA, Lilly King has posted the following performances (heats disregarded) in the women’s 100 meter breaststroke for calendar year 2021: