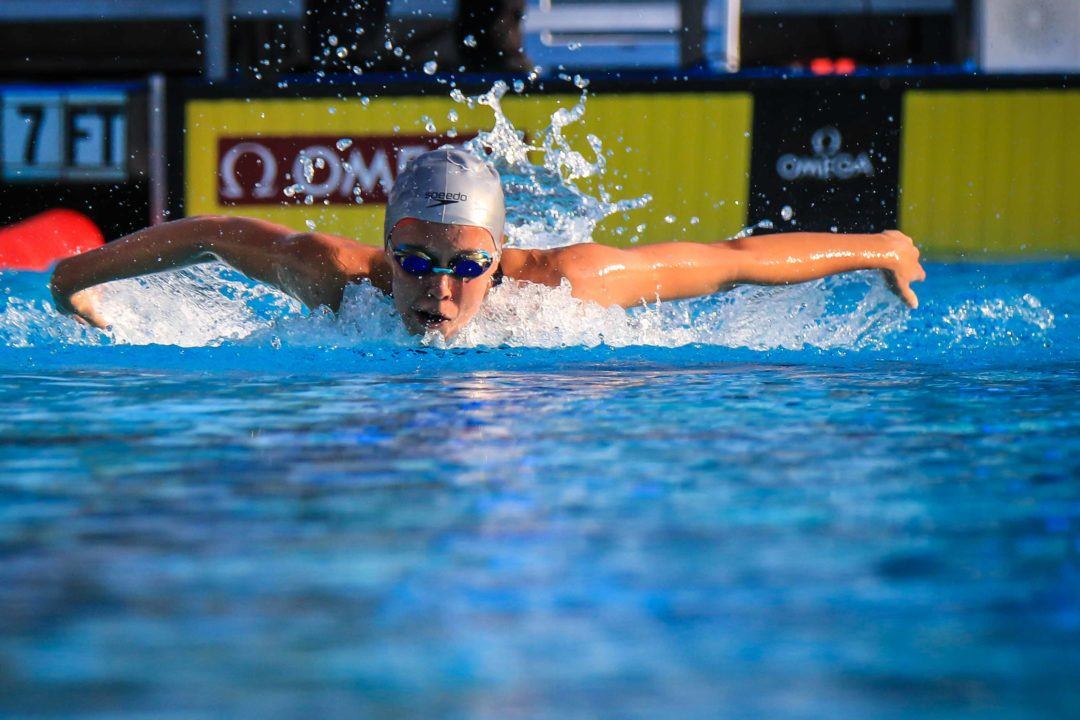 During Friday’s finals, National Teamer Justina Kozan dominated the varsity girl’s 200 IM with her time of 1:58.32 and shattered former Cal-Bear Katie Mclaughlin’s previous school record of 1:59.84, which was set in 2015, as well as the Trinity League record in the event. Her time was also a season best, just edging out the time of 1:58.68 she posted at the 2021 MAC March Madness meet. At the CIF Southern Section championships in 2019, Kozan set her lifetime best in the event of 1:56.31. The swimming portion of this year’s CIF-Southern Section Championships will kick off on the coming Tuesday, May 25. Diving began on Friday.

Kozan was the only swimmer in the event under the two-minute mark and led the pack by nearly six seconds. Kozan’s younger sister Asia touched in second with a time of 2:04.24, followed by Lena Li with a time of 2:10.57. The Santa Margarita girls went 1-2-3 in the event.

Later that session, Kozan swam to her second individual win of the meet, posting a time of 53.23 in the 100 fly and took down yet another Trinity League record. It was another season best for her, shaving off .6 from her previous season best of 53.88 also set at the 2021 MAC March Madness meet. Her lifetime best is a 52.42 from the 2019 Speedo Championship Series in Carlsbad.

Kozan’s teammate and Duke commit Isabella Abrajan finished in second with a time of 55.05, while Asia Kozan took third in 56.24. Further establishing their dominance, the Santa Margarita girls swept the top-four places in the event.

Another standout from Santa Margarita on the girl’s side was Macky Hodges. Hodges, a sophomore, swept the varsity girl’s 200 and 500 free. Unlike Kozan, both of the times that Hodges posted were lifetime-bests. She started out the meet by winning her first individual title in the 200 free, where she clocked a time of 1:47.30. The time qualifies her for the 2021 USA Swimming Summer Championships by .09 seconds.

Below are the names and splits of the record-breaking men:

Verdolaga and Jiang are beasts! Keep an eye out for them in the next couple of years

I’m surprised to see her swim in yards so close to the olympic trials.
She’s an exciting prospect in the 200 free, an event where Americans need new talents for the future.

California pushed back their state meets

CIF has interesting transfer rules (without knowing whether Utley is a transfer) that might be at play. If you transfer, you have to sit out a set period of the season before swimming varsity; if you swim JV at all you are locked into JV for the season.

If she was looking to get some meets in during the season and was a transfer, with COVID uncertainty, I can 100% see the reason for her opting to compete on JV early in the season and then getting locked in – especially as a senior (re: the article).

Yes, it is unfortunate for those she is competing against, but depending on how Trinity runs it’s JV competition, league JV meets are… Read more »

Good point. You think a girl that fast would want to earn a varsity letter. I think they were going for a JV title in the Trinity League so they had a fast swimmer in the JV division. In fact when I swam years ago in the Garden Grove League and the Varsity kids were the better swimmers and the JV were the slower swimmers. In fact my high school today varsity would be swimming in the open division in this the Trinity league that is how much faster the swimmers are.

Likely something going on other than swim. Perhaps conflicts on the scholastic front? Senior, end of year finals etc. who knows. Great swims regardless.

She could be a transfer…and chose to compete on JV rather than sit out. But who knows.