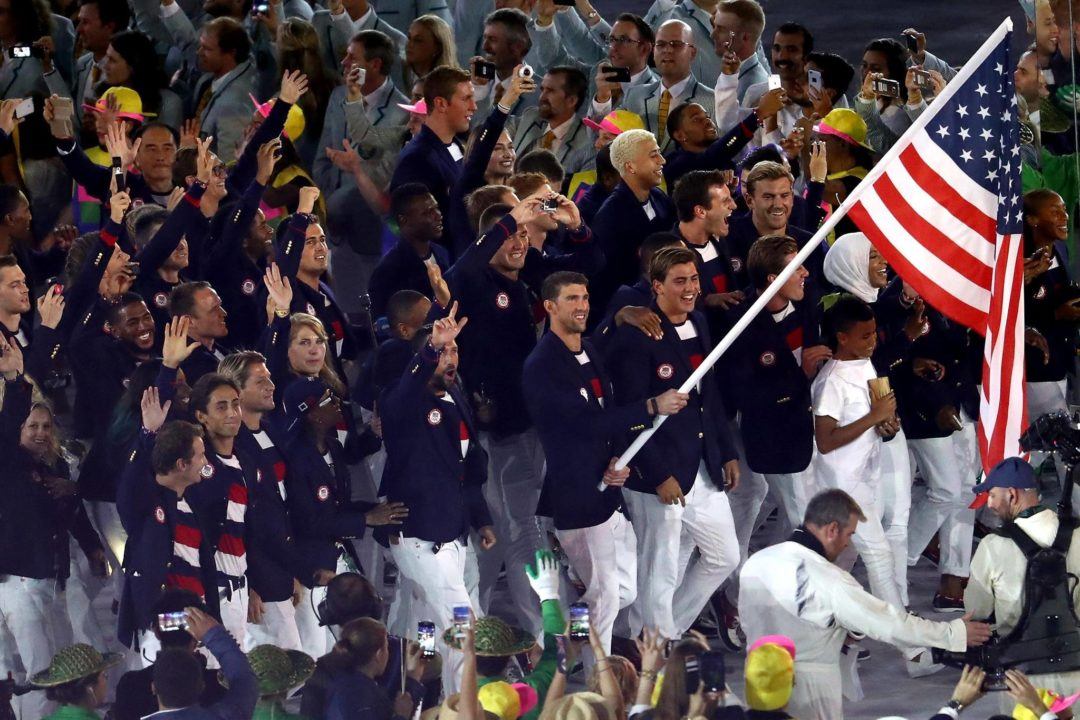 The Team USA Council on Social and Racial Justice has unveiled their second round of recommendations, in which they promote athlete expression. Current photo via Rio 2016

On Wednesday, with the support of the United States Olympic & Paralympic Committee (USOPC), the Athletes’ Advisory Council (AAC), and the United States Olympians & Paralympians Association (USOPA), the Team USA Council on Racial and Social Justice released their second set of recommendations. Their recommendations cover a variety of “ways to enhance athlete expression in the U.S. Olympic and Paralympic movements.”

The athlete-led council was first established by Team USA to “address the rules and systems in the U.S. Olympic and Paralympic movements that create barriers to progress” and provide solutions and recommendations that target the elimination of social injustice as well as the amplification of athlete voices in order to cultivate change.

In their second set of recommendations, the council covers four main areas of improvement: athlete support, education, communication, and protection. With their new guidelines, the committee hopes to “elevate the expression and advocacy of athletes from historically silenced, marginalized or minoritized groups within the Olympic and Paralympic community.”

In their announcement, chair of the Council Moushaumi Robinson (2004 Olympic gold medalist in track and field) emphasized the potential role that Team USA athletes play in creating “lasting” and “impactful change.” She notes, however, that the council cannot work alone and thus the implementation of the council’s recommendations requires the collaboration of the USOPC and National Governing Bodies (NGBs).

The support aspect of the recommendations cover the ways in which the “USOPC and affiliated organizations provide support services beyond athletic development,” such as providing necessary legal support to Team USA athletes experiencing discrimination, creating a system of career and professional services for athletes entering the professional world, and financial literacy education opportunities for athletes.

The recommendations regarding communication efforts focus on the avenues through which the USOPC and affiliated organizations can “increase internal and external communication opportunities for athletes.” Such efforts may include training opportunities for athletes covering the ways in which they can use their platforms to call for racial and social justice, “creating an organizational statement of commitment to racial and social justice from the USOPC, NGB and AAC leadership,” and designing a tool by which Team USA members and staff may report violations of non-discrimination policies.

Surrounding the educational area of their recommendations, the council suggests that the USOPC and affiliated organizations provide opportunities for athletes, coaches, USOPC representatives and NGB staff to continue learning about topics such as systemic racism, social injustice, bias and microaggressions, as well as sexual, emotional and physical violence trainings.

Lastly, the recommendations address protection of athletes through the installation of a “no retaliation policy to protect athletes who report instances of discrimination, abuse, harassment and/or harm, as well as creating an accountability mechanism for discriminatory acts and sentiments that protect athletes from harm, abuse and harassment.”

In December, the council released their first set of recommendations, which focused on the issue of protests and demonstrations as related to Rule 50 and Section 2.2 of the IOC’s guidelines. Rule 50 prohibits any demonstrations during the Games, whether it be political, social, or religious demonstrations. Athletes are, however, still permitted to express their views while doing media.

The council requested that the IOC and the IPC amend the rules in order to “end the prohibition of peaceful demonstrations by team members at the Olympic and Paralympic Games.” The council claimed that athletes should have the right to “demonstrate against racial and social injustices and to promote human dignity through global sport.”

In late April, the IOC Athletes Committee released their own set of recommendations on the matter, reiterating the message of the Team USA Council on Racial and Social Justice and asking for certain demonstrations (those promoting social and racial justice) to be allowed at the Games.

The IOC convened for a reexamination of Rule 50, but ultimately decided that the rule would remain in effect for the 2021 Games in order to maintain “political neutrality.” In contrast, the USOPC announced in March that athletes participating at the Olympic Trials events in the U.S. will be free to partake in any racial or social justice related demonstrations.

Keep Social Justice..(code word for Marxism)..out of Swimming.. Get lost!

The NBA needs this also!

How do you make for past discriminations?

Answer: Open swimming facilities for people who are poor or do not have those opportunities. Offer additional personalized coach to people who do not make the cut off time. So that when there times come down they can be on the team. Maybe even stack the lanes with swim team with people who have similar times and reserving the far lanes for the slow individual who will improve. Again all of these solutions involve personal responsibility on every bodies part.

There is no affirmative action in the sport of competitive swimming. You either make the qualifying times or you don’t, you either get your finger tips and hands on the touchpads first/second or you don’t, anything else is unfair.

Remove “protest” from “protest and demonstrations.” To me, and I mean this will all do respect to every last creature thy breathes oxygen, it’s not a protest when you are on the podium or on the field. It’s a protest when you don’t take the field or podium.

Take Kap for example. He sat down. That’s a protest. Then he talked with his punt holder placer guy and went to taking a knee. That’s a demonstration…. that’s working together and that is what gets people to think and reconsider where he’s coming from.

I hope to see any and all athletes taking “a stand” for whatever the believe in no matter what form they choose, just as long as… Read more »

So what if you don’t make the podium or even the field?

Yeah when they start protesting or whatever, that’s the time to head to the kiosk & get popcorn .There will be a long line of like minded spectators so by the time we get back to our seats , the emoting will be over .

Words cannot begin to express how much I don’t understand what you are talking about.

“ In contrast, the USOPC announced in March that athletes participating at the Olympic Trials events in the U.S. will be free to partake in any racial or social justice related demonstrations.”
Does this mean they can loot and burn down small businesses?

This hyper emotionalism about race & colour is just emoting . Everybody on the planet can be DNA tracked very simply to 200 years of ancestry .
How far do we want to go back & what % are we going to use to claim X race or Y ethnicity ?

For example Barack Obama is racially 50: 50 but ethnically ( upbringing & values) white . His father left Hawaii for Harvard when he was weeks old . According to his books he did not see him till a meeting at Hawaii airport 11 years later . As an adult he visited his fathers family in Kenya & began to identify as Black. .

This is so wildly tone deaf. People face legitimate discrimination and marginalization in this country, often due solely to their appearance. But sure let’s tell people next time they’re being pulled over by police to just pull out their DNA tracker. I’m sure that will keep the situation from escalating. BTW, you only got likes on this comment because you brought up Barack, and bigots thrive off of blindly questioning the mans ethnicity.