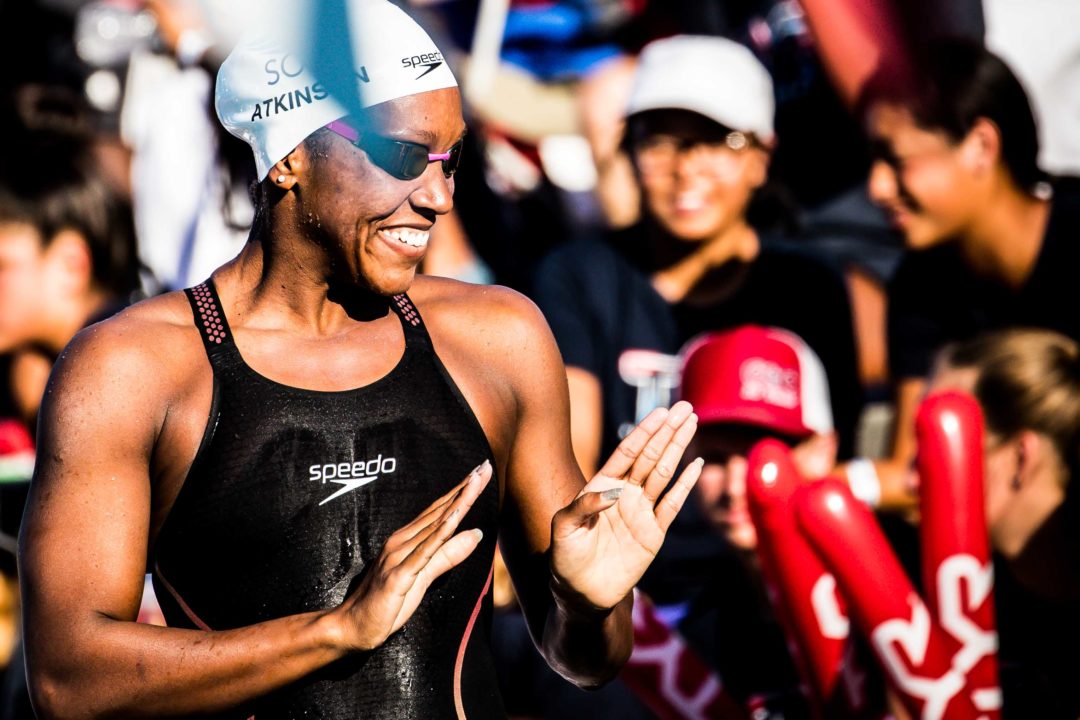 The 100 breast was one of two events that she swam at the meet, with the other being the 100 freestyle. Both events took place on Saturday, the second day of the meet.

Atkinson took a big win in the 100 breast, finishing four seconds ahead of the other competitors in the event. Although her lifetime best clocks in at a 1:05.93 from the FINA World Cup in Dubai, the fastest time she has swum this season is a 1:08.40 from the Piranhas Senior Invitational in March. Her time this past weekend was just .36 off of her season best.

SOFLO’s Olivia Dinehart touched behind Atkinson in a 1:12.70, followed by Alex Lantin in a 1:15.40. Dinehart gained only.16 seconds from her best time of 1:12.54, which she set just months prior at the Southern Zone Sectional Championships in February. Both times qualify her for the Speedo Summer Championships in August.

Since posting a time of 1:06.52 at the 2016 Games in Rio, Atkinson’s fastest recorded 100 breaststroke has been a 1:06.83, which she swam at the XIII Juegos CAC in Baranquilla. Since her first Games in 2004, Atkinson has represented Jamaica at the Olympic Games and other international events. Atkinson graduated from Texas A&M in 2010 as an NCAA champion and  multiple-time All-American and went on to continue her very successful international career. At the Doha Short Course World Championships in 2014, she became the first ever black woman to earn a world title in the sport of swimming with her historic 100 breaststroke victory.

Atkinson has already qualified for the Tokyo Games, which will be her fifth Olympic-appearance. At 32-years-old, she will be one of the oldest and most experienced swimmers at the Games. This past ISL season, Atkinson competed with the London Roar and was one of their highest-point scorers and most valuable swimmers. She rounded out the year with the 2nd and 3rd fastest times in the 100 (1:02.66) and 50 (28.88) breastrokes, respectively. If her short course dominance translates to her long course swimming, Atkinson has a solid chance at podium, or at least top-eight, finishes in Tokyo.

Princeton’s Margaux McDonald captured a last-minute Wave I Trials cut at the third and final day of the meet.

McDonald blazed to a 1:02.17 finish in the 100 backstroke, clinching the Wave I Trials cut by over a half-second and shaving off nearly two seconds from her lifetime best. Prior to the meet, her best time in the event was 1:03.97, which she swam in 2019 at the Arena Western Zones Series. Her season best was a 1:04.52, which she posted at the Piranhas Senior Invitational in February.

McDonald hasn’t recorded any short-course times since pre-COVID times, but her long-course season progression shows that her 100 backstroke was a breakout swim for her. She also swam the 200 back at the meet, where she similarly dropped a large chunk of time. In February, McDonald clocked a new personal best of 2:19.77. This past weekend, she improved on that time by over three seconds with her new best time of 2:16.09. She was the only swimmer under the 2:20 mark in the event. Elena Dinehart of SOFLO took second in 2:20.57.

As the Ivy League opted to cancel their winter sport seasons in 2020, McDonald has not yet had her Princeton debut. Out of high school, McDonald was a 56/1:59 backstroker. Although she hasn’t clocked any new short course times since the pandemic began, her breakout 100 backstroke swim indicates that she may have a very successful 2021-2022 season ahead of her, and make an immediate impact for the Princeton women.

Man, how great would it be to hang out in Jamaica AND go to the Olympics.

Would love to see Alka on the podium, but it’ll be tough she’ll have to be 1:05 again. King, Schoenmaker, Lazor/Jacoby will be fast. Pillato could also be 1:05

Yes, missed her! She could also medal if she repeats the time or faster she’ll be silver IMO

Don’t forget her compatriot Emelie Fast because she is FAST

It’s interesting how women’s breast hasn’t really progressed much since the Soni days, and men’s breast has gone insane. Maybe Lily will drop something Peaty-esque.