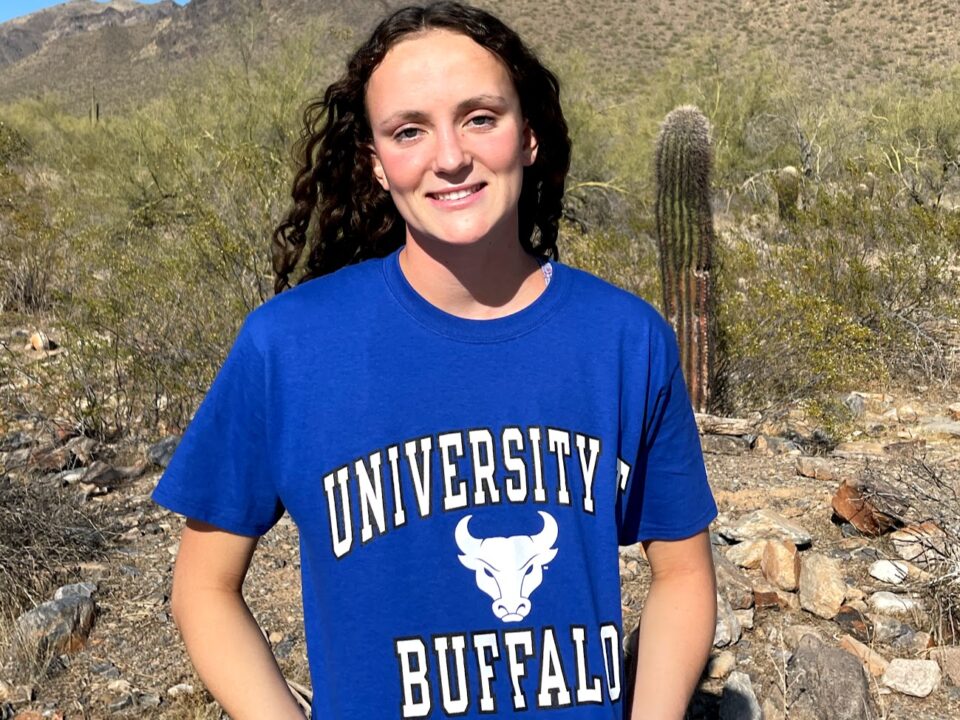 Distance specialist Ava Cunngingham has announced her commitment to swim for the University at Buffalo. She will join the Bulls for their 2022-2023 season. Current photo via Ava Cunningham

Ava Cunningham of Scottsdale Aquatic Club recently announced her verbal commitment to the University at Buffalo. Cunningham, class of 2022, will join the Bulls for their 2022-2023 season.

“I’m so excited to announce my verbal commitment to continue my academic and athletic careers at the University of Buffalo! To my family, coaches, and friends thank you for everything! I’m so excited to be a part of this amazing team! Go bulls!”

Cunningham finished off her 2020-2021 short course season in March at the Speedo Sectionals – Four Corners meet in Paradise Valley, Arizona. She clocked three lifetime bests at the meet, and a fourth season best. Her highest placement was in her 1000 free, where she placed third amongst the women and eighteenth in the mixed event. Cunningham finished the 1000 in a 10:18.12, marking a three and a half second improvement from her previous best time. She rounded out her distance lineup with the 500, in which she took twelfth place, and the mile.

In December of 2020, Cunningham had breakout performances at the AZ SAC Senior Finale meet. She swam five events, and snagged three lifetime bests as well as one season best time. Notably, she took fourth in the 500 with a 4:58.78, first in the 1000 with a 10:21.84, and second in the mile with a 17:10.50. The meet marked her second-ever 500 time under the 5:00 barrier. Just a few weeks earlier at the Senior Challenge meet, she dipped under the marker for the first time, posting a 4:58.54 and shaving four seconds off her previous best.

Her continued improvement in the distance events bodes well for her collegiate career with the Bulls. Since late 2019, Cunningham has shaved off nearly 10 seconds in the 500, five seconds in the 1000, and 36 seconds in the 1650. Since then, she has also extended her freestyle range to include the 200. She posted a 1:53.65 at the AZ SAC Senior Finale this past December, which was nearly three seconds faster than the fastest time she recorded in 2019 (1:56.18).

Considering her consistent improvement, Cunningham has the potential to make an immediate impact for the Bulls, who already have an impressive distance roster. Most of her best times fall somewhere in the middle of the team’s top recorded times for the 2020-2021 season, but her 1000 stands out. Her time of 10:18.12 would’ve put her in second on the team during the 2020-2021 season, behind only senior Brittney Beetcher who clocked a 10:16.60 in their dual meet against Akron.

The Bulls’ women recently picked up a Mid-American Conference Championship, beating out Akron for the title. Cunningham’s best 500 time would’ve made the B finals at the MAC Championships, and her top mile time would’ve placed her 12th.

Cunningham will join Karen Austin and Kaley Ream as part of the Bulls’ class of 2026.

Congratulations Ava! They are lucky to have you on their team!