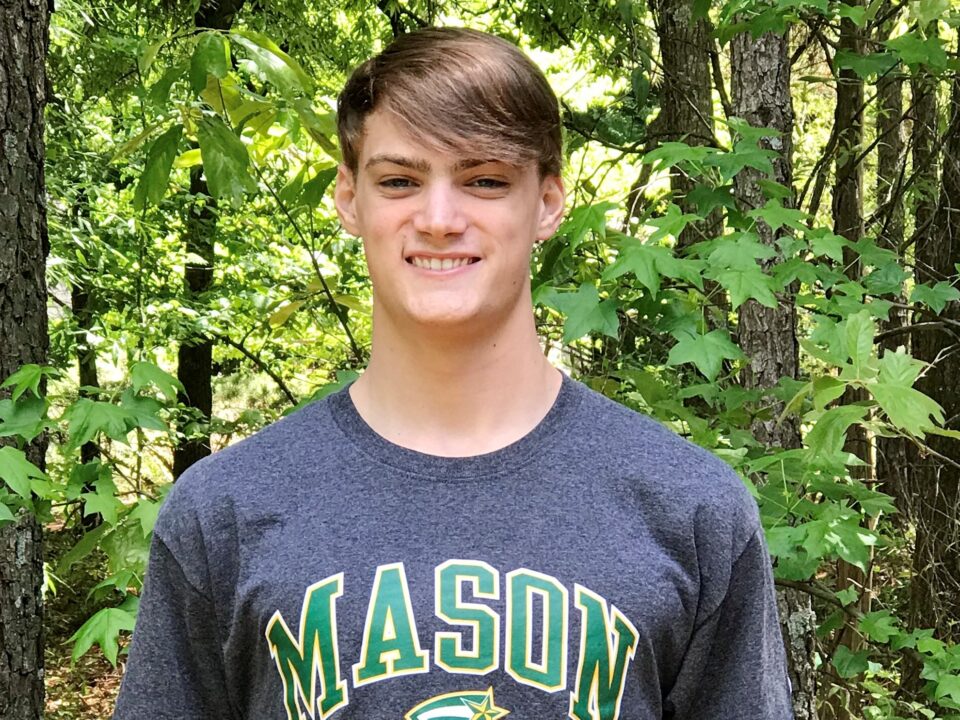 Nathan Powell of Mecklenburg Swim Association announced his commitment to swim for George Mason University beginning in the fall of 2021. Current photo via Nathan Powell

George Mason University has added 57.0/2:02 breastroker Nathan Powell to their class of 2025. Powell, who swims for Mecklenburg Swim Association and Indian Land High School, will help fill the gap that the team’s top breastroker, senior Dylan Peck, will leave.

“I am thrilled to commit to George Mason because of its competitive swim program and innovative educational opportunities. The team has a great team dynamic and excellent coaching staff, I am extremely impressed with the engineering and business programs offered at the school. I love the beautiful and modern campus and it’s close proximity to DC. Mason is the perfect fit for me! Go Patriots!”

Fast forward another year, and Powell moved up the rankings in the 100 breastroke and established himself as the team’s top breastroker. He finished out his senior season with a second place title in the event and hitting a time of 58.56.

Powell’s best times, however, come not from his high school seasons, but from his club seasons. The majority of his best times (in his top events) come from the 2020-2021 season, which bodes well for his collegiate career. Powell’s range extends beyond just the breastroke events- he also excels at sprint freestyle. At the 2021 SC SCSC 2021 MOCS Championship Finale meet, Powell lowered both his 50 and 100 freestyle times. He took third and second, respectively, with times of 21.17 and 46.80. His 46.80 was his first time under the 47 barrier.

Comparing his times to the Patriots’ top times for the 2020-2021 season, Powell would’ve been one of the team’s top 200 breastrokers, and among the top half of the team’s 50 freestylers. Dylan Peck, the team’s top breastroker, was a senior this past year. Although Powell isn’t quite at the level that Peck was when he left, his rapid improvement indicates that he could reach the same level at least by his senior season.

George Mason competes in the Atlantic-10 conference, and consistently finishes near the top of the conference. This past year, the men’s team took second to George Washington University. Powell’s times put him in likely scoring position, which will help the Patriots maintain their dominance in the conference. His best 100 breastroke him would have had him scoring points in the B-final, while his 200 breastroke would’ve qualified him for the A-final. His 50-free would’ve been just outside of the top-16 range.