2021 U.S. Olympic Trials Previews: Flickinger And Friends In The 200 Fly 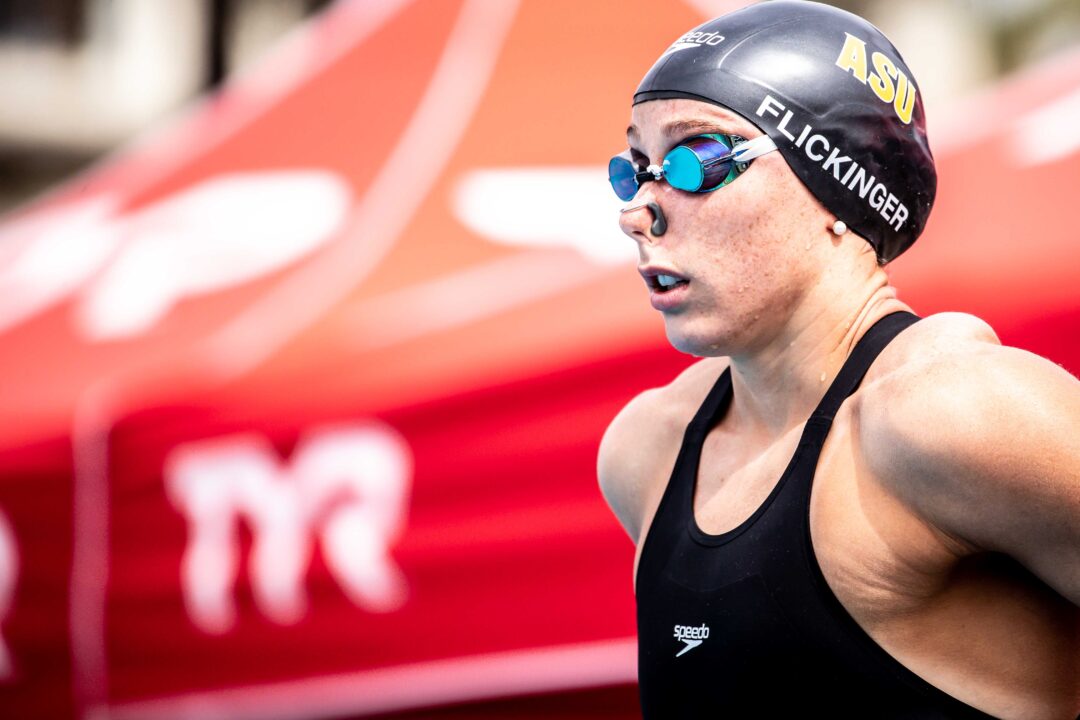 As one of the US's most consistent national teamers of late, Hali Flickinger looks to be a lock to represent the US in Tokyo in the 200 fly. Archive photo via Jack Spitser/Spitser Photography

It’s hard to bet against Hali Flickinger in the women’s 200 butterfly at the U.S. Olympic Trials. Over the past 5 years, she has been one of the most consistent members of the American delegations to big international meets.

Her first big break was at the 2016 Olympics when she raced her way into the Olympic final and placed 7th, alongside Camille Adams, who finished 4th.

Upon Adams’ retirement, Flickinger lead the American women in the event to the 2017 World Championships, the 2018 Pan Pacific Games, and the 2019 World Championships. After just missing out on the final in 2017, she came back in 2018 to win gold at Pac Pacs and then won silver in the 200 fly at 2019 Worlds.

With her top rankings among American women over the past few years and her historic ability to perform on the world stage, Flickinger is our top pick for the 200 fly at 2021 US Olympic Trials.

The women’s 200 fly field, globally, continues to feel as though it’s in a lull. Perhaps the impact of the untouchable World Records that nobody is near, the races feel wide open.

Another factor in that feeling is, frankly, the lack of a dominant 200 butterflier from the United States. No American woman has won a medal in the women’s 200 fly at the Olympics since Misty Hyman’s gold medal upset in 2000.

Flickinger feels poised to break that streak, but there’s still a huge unknown for her. She has moved across the country from her collegiate home in Athens to train in Arizona since winning a silver medal at Worlds. That change of training brings added uncertainty to how she’ll perform at Trials, though perhaps a longer leadup to the meet because of the delay will give her more time to perfect the plan.

That coach happens to be Bob Bowman, who was the coach of the most successful male 200 butterflier in history, Michael Phelps, but his results with other international athletes has been mixed – some highlights (like Flickinger’s fellow Georgia Bulldog Allison Schmitt), and other situations that didn’t work out (like Frenchman Yannick Agnel.

Regardless, she feels like a strong bet to at least make the team. There’s only one other swimmer who is performing in a similar sphere as her right now in the United States, and that’s the backstroke World Record holder Regan Smith.

Smith holds a 2:06.39 from March of 2020 as her best time and has a 2:07.59 season-best which she swam in May 2020 at the Pro Swim Series in Indianapolis. Smith is certainly more well known for her abilities in the 100 and 200 backstroke considering the fact that she holds both long course world records in those events. The 200 butterfly, however, is a consistently solid 3rd event for Smith and considering that it falls right in between the 100 and 200 backstroke at Trials, Smith should be able to designate enough of a focus to the event to have a solid chance.

She has not committed to that, however, and if she doesn’t race, the other spot for the U.S. at the meet becomes wide open.

While Flickinger may outpace Smith in this event in Tokyo, there’s an argument for the reverse result at Trials. That’s because Smith will need to be on a full taper if she wants to qualify for the team in the 100 backstroke, especially, where she faces a loaded field of at least 3 swimmers who could conceivably win gold at the Olympics.

Flickinger, on the other hand, could be just short of a full taper and still feel confident of making the team in her primary events.

The women’s 200 butterfly is one of the events that could see a relatively-large number of A finalists from the 2021 NCAA Championships make their way into the A final at Trials. Among those who finsihed in the top 8 at NCAAs and are also in the top 10 in the long course rankings this season are Olivia Carter, Dakota Luther, Taylor Pike, and Kelly Pash.

NCAA runner-up Olivia Bray is on the outskirts of the long course rankings and has only been as fast as a 2:11.48 which she posted in May 2021. But she swam multiple lifetime-bests in the 200 fly during the NCAA season, totaling a 1.7 second drop, and that could lead to a long course pop as well.

Carter is going to be a name to watch at Trials this year and is set to improve significantly upon her 2:16.66 swim at 2016 US Olympic Trials which left her with a 60th place finish. Since 2016, Carter has seen great improvement in the event and also raced her way to a silver medal for the USA at the World University Games in 2019 with a 2:09.05.

Carter took silver at that meet to fellow 2021 NCAA finalist Dakota Luther who was golden at 2019 WUGS with a 2:07.92. Luther’s PB is even quicker than that, sitting at a 2:07.76 from US Nationals in 2019. Two years before that, Luther was selected to swim at World Championships in Budapest and posted a 2:08.86 in the prelims and a 2:09.55 for 15th in the final. Luther was a 1:53.01 for bronze at this year’s NCAAs but was even faster at SECs a month earlier with a 1:52.04. Her NCAA success this year combined with her international experience will allow Luther to come into Trials with confidence and ability and she certainly can’t be counted out yet.

Olivia Bray, Taylor Pike, and Kelly Pash will all be in attendance as well, holding PBs of 2:09.60, 2:09.85, and 2:08.79, respectively. The most intriguing name of those 3 for these Trials will be University of Texas swimmer Kelly Pash. After tying with Talyor Pike for 4th at NCAAs, Pash transitioned nicely into the long course season and posted that 2:08.79 PB at Indianapolis stop of the 2021 TYR Pro Swim Series. That was a near 2 second drop from Pash, improving upon her 2019 swim of 2:10.61. Assuming she wasn’t tapered in Indianapolis, Pash will likely try to take advantage of that PB-producing momentum at Trials in an attempt move up the 200 fly ranks.

Another name that cannot be left out of the 200 butterfly conversation is Katie Drabot. At the most recent World Championships in 2019, Drabot joined Flickinger on the podium of the event with a 2:07.04 for the bronze medal. She was actually a bit fast in the semi-final though in which she swam a 2:06.59 which would have been fast enough to win gold had she swum that time in the final. Drabot hasn’t been extremely active this year, holding a PB of 2:09.24 but her 2019 performances keep her in the running as one of the most likely candidates to break into the top 2 at Trials.

Like some of her Stanford post-grad teammates, though, extra-stringent pandemic restrictions in the Bay Area and limited racing opportunities means she hasn’t been as fast as a lot of her competitors this season. That leaves a bit of a haze on the crystal ball as to where they’re at and how their preparations are progressing.

In the same year that Drabot won bronze at World Championships, Lillie Nordmann and Charlotte Hook represented the United States at World Junior Championships. That duo pulled off a gold and bronze medal performance, respectively with Nordmann posting a 2:08.24 for the win and Hook a 2:09.00 for third. While Nordmann, like Drabot has been fairly quiet this year, Hook managed to swim a 2:07.99 back in April 2021, nearly getting within a second of Flickinger’s leading time of 2:06.68.

Hook is a training partner of 100 butterfly wunderkind Claire Curzan at the TAC Titans. The Titans have a very hot hand right now, and Hook has done more of the national tour over the last 7 months than has Curzan. Given her age, and the overall momentum of her team, she’s another strong candidate to rapidly rise in the rankings.

Dark Horse: Lucy Bell (PB – 2:11.18) Lucy Bell is one of the youngest qualifiers for Wave II in the 200 fly at age 16 and holds a best time of 2:11.18 in the event which she swam back in 2019 to take second place at the Speedo Junior National Championships. Bell recently swam a 2:12.06 this April, marking her season-best. While she will definitely need to shave a second or two off her best time in order to qualify for the A, should Bell hit her taper right she could be potentially be an example of a junior showing up when she needs it most and upsetting the field.

When did Katie McLaughlin stop swimming the 200fly LCM? I remember she went to World in 2015 for the 2fly, and she did quite well. Has she simple stopped in order to focus solely on the 100fly and 200free?

Keep an eye on KLINK!

Y’all are seriously sleeping on the 2021 NCAA CHAMPION… Olivia Carter will be challenging that #2 spot!

The specifics of training during pandemic and postponing of Olympic Games for one year made current pre-Olympic season very difficult for Regan Smith.
“Backstroke, in particular, felt really rough. I remember it got to the point where I would avoid backstroke and do butterfly instead, just because backstroke felt so funky. Nobody really wants to do fly in practice.”
I expect her to be very strong in butterfly events at Trials. That is where she is completely free of any worries now.

I agree. If Regan has a breakthrough swim I think it will be butterfly not backstroke. She’s been out fast then slightly overtaken. Once the stakes are considerably higher the speed tends to keep going. Besides, Flickinger is a nice consistent swimmer but not the brilliance or upside of some of the young backstrokers.

The Camille Adams prelims DQ overturn in 2016 was so epic.

Flick really has impressed us with the consistency (and she’s one of the safest bets for the team outside of the elite 4/5 swimmers), but oddly this event seems ripe for a Trials upset (maybe for spot #2) for some reason.

Define “epic” here in this context

mom said its my turn on the xbox

Drabot’s times do not reflect her true speed because she is very fast thru 150 and then post a terrible last 50, which makes her times slow. Drabot has always been a good finisher so I believe she has been holding back, I don’t know why, but the same seems to be how Manual has performed this year. I expect that Drabot’s speed will appear during trials, and she will join Greg at the Olympics!