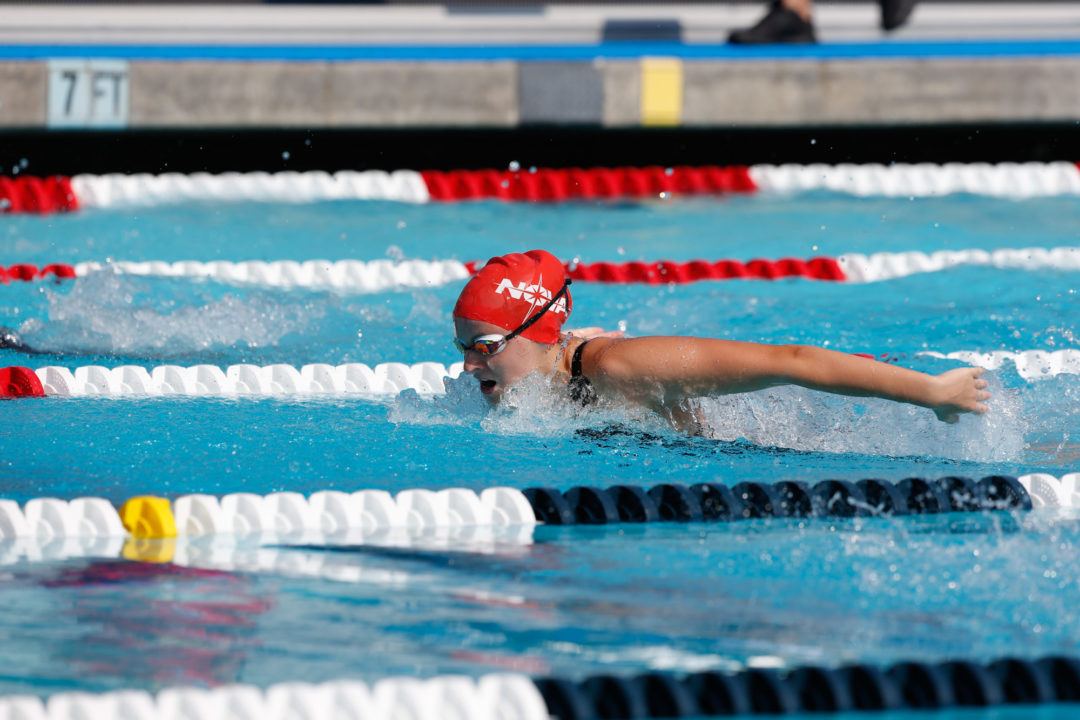 Letitia Sim is the top seed in tonight’s 50 fly but will also go in as 2nd seed in the 200 IM, right behind Lucy Thomas.

McKenna And Marsteiner Among Limited Scratches For Day 5 Of NCSAs

Only 2 top-24 seeded swimmers have scratched an event heading into the 5th and final day of the 2021 NCSA Spring Invite.

Joshua Zuchowski was the only swimmer in the top-16 to scratch an event tonight, dropping his spot in the 100 breast ‘B’ final to focus on the 100 fly.

Claire Dafoe of NOVA of Virginia had a breakthrough swim in the 500 free prelims, going under 4:45 for the first time.

The final session of the NCSA Championships will consist of the 50 butterfly, 200 IM, and 50 freestyle, with the top heats of the 400 medley relay and 1650 freestyle also competing.

Letitia Sim posted the top time in the women’s 50 fly this morning with a 24.41, while Tiago Pereira led the men’s event with a 21.82. The top 4 seeds in the men’s 50 fly are all seeded within .1 of each other going into the final session.

Oly Swimming’s Lucy Malys went out strong, building a body length lead over NOVA’s Claire Dafoe by the 500 yard mark. Although Dafoe began to make a push for first place, Malys never relinquished her lead, finishing in a time of 16:09.22 to drop almost 20 seconds off of her best time.

Dafoe ended up finishing in second with a time of 16:15.53, chopping 5 seconds off of her personal best, with her teammate Sanna Peterson finishing 3rd in a time of 16:26.95, cutting 6 seconds.

15-year-old Madison Smith set the top time out of the morning heats with a personal best of 16:53.43, chopping almost 15 seconds off of her best time. Her time held up for 6th overall following the final heat.

Teammates Trey Dickey and Levi Sandidge from Cor Swimming were dead even for a majority of the race, flipping simultaneously through the 800 mark. Sandidge began to pull ahead after that point, building a half body length lead over Dickey by the 950 yard mark. However, Dickey caught up with Sandidge over the course of the final 50, with both swimmers splitting sub-24 seconds. Ultimately, Dickey snuck past Sandidge on the finish, coming into the wall .15 ahead of him with a time of 8:59.72, to Sandidge’s 8:58.87. Both swimmers dropped significantly from their best times, with Sandidge chopping 8 seconds and Dickey cutting 10 seconds.

The race for third was just as close, with Long Island Aquatic Club’s Juancarlos Castrillon out touching Cor’s Giovanni Linscheer 9:12.44 to 9:12.83.

15-year-old Like Corey swam a personal best to take top spot out of the early heats. Entered with a mile time, Corey ended up with a time of 9:19.75, finishing 6 seconds ahead of his closest competitor. Corey’s time ended up placing him 6th overall after the final heat was completed.

15-year-old Campbell Stoll from EBSC slashed over a half second off of her time from prelims to claim the top spot in the 50 butterfly, finishing in a time of 23.98.

Sisters Levenia and Letitia Sim from TNT Swimming finished 2nd and 3rd, with only .04 separating them. Levenia chopped almost a second off of her time from prelims, significantly improving upon her 6th place seed from the morning.

In a close finish Tiago Pereira out touched William Hayon by .05, with times of 21.43 and 21.48, respectively. Both swimmers dropped about .4 off of their seed times from prelims.

Sitting in 6th place going into the breaststroke leg, NOVA’s Grace Sheble turned on the jets during the last 100 of the race, splitting 33.04 on the breaststroke leg and 27.27 on the freestyle leg. Ultimately, Sheble ran down the field and touched 1st overall in a time of 1:56.99, taking .01 off of her own meet record.

After placing 3rd in the 50 butterfly, Letitia Sim came in 2nd here, dropping .3 off of her best time.

Sheble’s teammate Zoe Dixon took it out with the fastest opening 100 split in the entire field, splitting 54.81. Ultimately, she ended up coming in 3rd with a time of 1:57.90.

Nathaniel Germonprez  from Inspire Swim Team dominated the race by 2.5 seconds, finishing in a time of 1:45.86. Notably, Germonprez had the fastest butterfly split in the entire field by about a half second, coming up with a time of 22.82.

After placing 5th in prelims, Alexis Mulvihill took control of the final, finishing in a time of 22.58 to touch ahead of the rest of the field by .2. Mulvihill was slightly off of her best time of 22.22 with her performance.

Long Island’s Joanie Cash dropped a half second from her prelims performance to take second, just ahead of top seed Lucy Thomas. Cash and Thomas both cut three tenths of a second off of their best times over the course of the day.

Luke Barr, the top performer in the prelims session finished 2nd in a time of 20.06, cutting .02 off of his time from the morning. William Hayon backed up his second place finish in the 50 butterfly with a 3rd place finish here, dropping .03 off of his best time.

Elmbrook ran away with the final relay title of the meet. The team of Margaret Wanezek, Lucy Thomas, Campbell Stoll, and Abigail Wanezek combined for a final time of 3:34.42. On the anchor leg, Abigail Wanezek threw down a blazing 48.60, the fastest split in the entire field to secure the team’s victory.

NOVA finished second with Grace Sheble putting up a notable 59.98 split on the breaststroke leg of the relay.

Inspire’s team of Luke Barr, Kael Mlinek, Mateo Miceli, and Nathaniel Germonprez combined for a winning time of 3:13.95, besting the field by almost 4 seconds. On the breaststroke leg, Mlinek threw down a split of 53.64, leading the entire field by over a second.

Saint Andrew’s finished second, chopping a second and a half off of their seed times.

Notably, the Mid Wisconsin Wave Makers were disqualified in this relay, dropping them from 2nd to 4th in the men’s team standings.

What did Mid Wisconsin Wave Makers get DQ for?

Well, Thankfully my sister didn’t beat me in the mile this season.