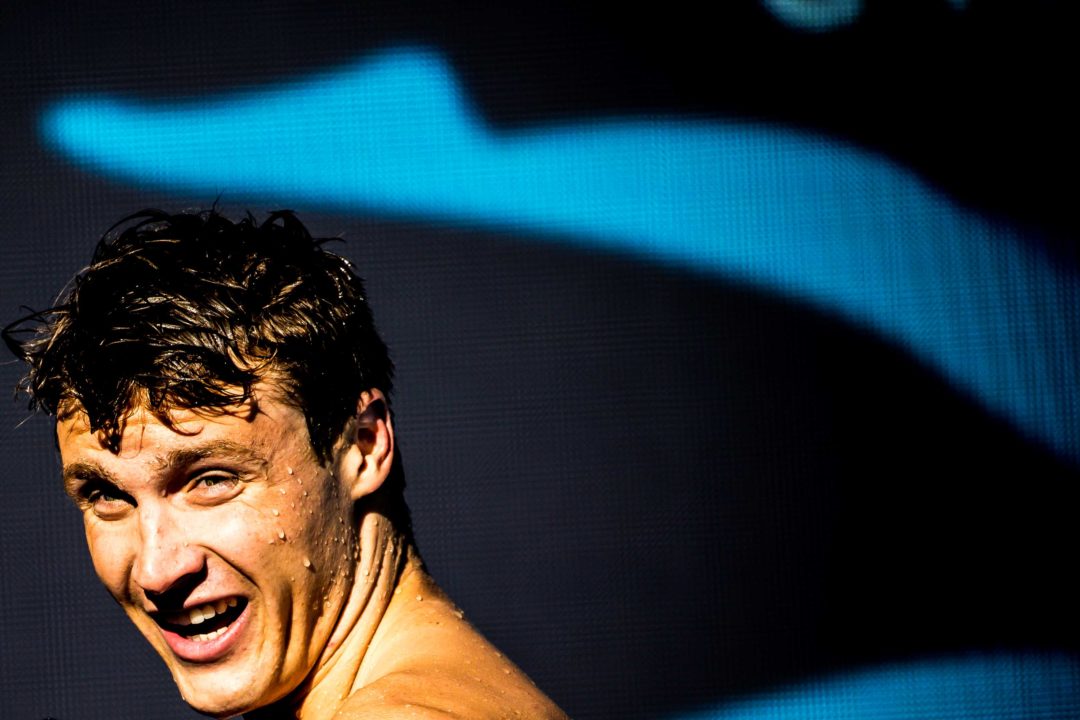 Bobby Finke is the heavy favourite here as he looks to secure his first-ever 1650 NCAA titles. The biggest question we have is who will follow. Current photo via Jack Spitser/Spitser Photography

We’ve previously detailed how Kieran Smith was en route to 500 freestyle gold at last year’s ultimately canceled NCAA Championships and is gearing up now to pull off the 2021 win. We have a similar story with Bobby Finke in the men’s 1650 freestyle who last year became the 1650 champion at the 2020 SEC Championships when he destroyed the previous NCAA and American records. He swam a 14:12.08 for the crown, getting under Clark Smith’s previous NCAA record of 14:22.41 and Zane Grothe’s American record of 14:18.25.

Finke has his shot at his first-ever NCAA title in the 1650 freestyle, he’s set himself up quite nicely to do so and is entered as top seed in the event. He swam a 14:12.18 at 2021 SECs last month, getting dangerously close to his NCAA and American records (a tenth short).

One significant factor that could have interrupted the end of his season was when he injured his foot in the lead up to SECs last month and was spotted with a walking boot on the eve of the championships. It’s been confirmed, however, at this point that it hasn’t slowed him down considered his 14:12.18 title-winning swim as well as his second-place winning 3:39.15 in the 400 IM.

Behind Finke in the 1650 is Georgia freshman Jake Magahey who finished second to Finke at SECs with a 14:24.96. That swim for Magahey was a significant PB for him and only his second-ever swim in the NCAA following his November swim of 14:33.78. Going into the season, he had a best time of 14:51.54 which he swam as a high schooler in 2018. Magahey is having one of the most successful freshman seasons this year and matches his second seed in the 1650 with the #2 spot heading into the 500 freestyle as well as a 5th seed in the 200 free.

Yeadon is actually not the only past 4th place finisher to be entered in the event this year. In 2019 Cal’s Sean Grieshop just missed the podium when he swam a 14:35.82 at NCAAs, establishing a new PB which still stands today. Grieshop didn’t quite perform up to his full potential throughout the 2019-2020 season, setting a season-best of 14:51.09 as the 17th fastest man in the NCAA for the year. Grieshop has actually fallen down in the rankings a bit this year and will go into the event as 25th seed with a 14:54.95 which he swam at Pac-12s.

It’s important to note here that Grieshop’s 2019 4th place performance of 14:35.82 in the event was a sizeable drop from his 2019 Pac-12 performance of 14:44.83. While he will need to have a heftier drop this year to get from his Pac-12s swim of 14:54.95 to a time that will be competitive at NCAAs, he could potentially be gearing up for a big swim here at his final NCAA Championships.

It’s quite late in this preview to be getting to the third seed in the event but another name in contention here will be Notre Dame sophomore, Jack Hoagland. Hoagland is entered this year behind Finke and Magahey with a 14:31.83 which he swam at this year’s ACC Championships. Hoagland swam a similar time at last year’s ACCs with a 14:35.19 but hasn’t yet gotten an opportunity to contest the event on the national scene. He’ll likely need to dip under 14:30 in order to make his way to the podium which we can’t yet count out as we’ll likely get our first look at a tapered Hoagland in the NCAA.

Michael Brinegar is another important name to bring up here. Brinegar is the 2019 silver medalist in the event, having swum a 14:27.50 at the meet two years ago. Heading into this year he’ll be entered as 6th seed with a 14:38.26 which he swam in order to pick up gold at Big 10s earlier this month. Given his history, he has the potential to perform well in the 1650 later this week and will look to get under 14:30 and throw his name in the hat for a spot on the podium.

Stanford senior Grant Shoults will act as a bit of a wildcard at this year’s NCAA Championships. We haven’t seen him at the meet since 2018 when he swam a 14:45.22 for 14th in the event. In 2017, however, he finished 8th at nationals with a 14:35.82. Since then, Shoults has suffered significant shoulder injuries and underwent surgery in the fall of 2018 and again in 2020. He’s made quite a comeback since then, however, and even posted a new unofficial best time in the 1000 freestyle of 8:44.7 in January 2021.

Shoults has only gotten to a 14:49.12 this season which gives him a 16th place seed in the event but given his past ability to perform at NCAAs, his recent quick swimming in the 1000, and a sure hunger for redemption in his senior year NCAAs, we expect to see a top 8 finish here from Shoults.

One more swimmer that we may see in the top 8 here will be NC State, Ross Dant. Dant has a season and lifetime best of 14:35.73 which will give him 5th seed this week. Considering the case to be made for 6th seed Brinegar, 16th seed Shoults, and 25th seed Grieshop, Dant will likely need to shave some time off his best to hold them off.

Regarding the dark horse pick, if it’s based on long course times for foreign swimmers, pick Ilia Sibirtsev of Louisville. He’s seeded 18th at 14:51.33.
His best 1500 LCM is 15:05.17 (3rd at 2019 junior world championships) and his best 800 free is world class, 7:48.05 (2nd at 2019 Junior worlds).
NCAAs is truly an international meet. The swimmers from abroad are an enormous part of why the meet is so exciting, and one of the wild cards is finding out when exactly some of our swimmers from abroad figure out the 25 yard pool.

Will Finke pick up the 1000 Free record on his way to victory?

He was less than a second off the record in 2020 going out. But he was over 4 off going out last month. So based on his new splitting pattern, if he breaks the record on the way out I’d expect it to be en route to a 14:05.

If we see that this year I think the hype starts for a sub-14 mile next year.

There is no information listed for streaming. Will we be able to watch anything this evening? Really looking forward to this.

0
0
Reply
Club Coach
Reply to  He said what?

2
0
Reply
wethorn
Reply to  He said what?

From what I can tell, all sessions are on ESPN3, which I think is a URL or app only option and you have to have a cable sub as well. Try https://www.espn.com/watch

I was able to test it yesterday watching some of the women’s sessions.

DON’T SLEEP ON CHARLIE CLARK. This man is an animal in the making. That boy from Sandusky gonna show out.

I tend to agree, I wonder if Jake Magahey will be able to hold// re-taper that quick. I like Grieshop to move up a spot or two here

Is Brooks Fail not doing the mile?

Seeded 10th on the psych sheets

Your guess is wrong.

Whoops.I read nationals and was thinking LCM. Thanks!